According to the analytics firm, the global smart connected device market grew by 27.1% year-on-year during Q3 2012, culminating in a record 303.6 million shipments that is valued at $140.4 billion.

Expectations for this holiday shopping season are that shipments will continue to reach record levels, increasing by 19.2% compared to Q3 2012 and 26.5% over the same quarter a year ago. The IDC’s worldwide quarterly smart connected device tracker service revealed that Q4 2012 shipments are expected to reach 362 million units with a market value of $169.2 billion dollars.

Market growth for the holiday shopping season will be driven by tablets and smartphones, of which sales are expected to increase by 55.8% and 39.5% year-on-year respectively. In contrast to mobile device sales, PC shipments are expected to drop slightly compared to Q4 2011.

Samsung and Apple lead the way

When it comes to smart connected device vendors, Samsung maintained the top position in Q3 2012, courtesy of a 21.8% market share based on shipments.

Apple ranked second overall in shipments thanks to its 15.1% market stake, but came up tops in terms of the monetary value ($34.1 billion) of its Q3 2012 smart connected device shipments. This is largely due to the high average selling price (ASP) of $744 across all its device categories.

Ryan Reith, program manager, IDC worldwide mobile device trackers service, stated that the battle between Samsung and Apple at the top of the smart connected device space is more heated than ever. Reith added that the difference in their collective ASPs makes for a telling sign of the different market approaches these two tech giants take.

Apple’s device shipment tally is more than 20 million down on Samsung’s, but the value of its shipments is a lot higher due to the fact that Apple’s ASP is $310 above that of Samsung’s. This serves to illustrate the premium product line that Apple sells. 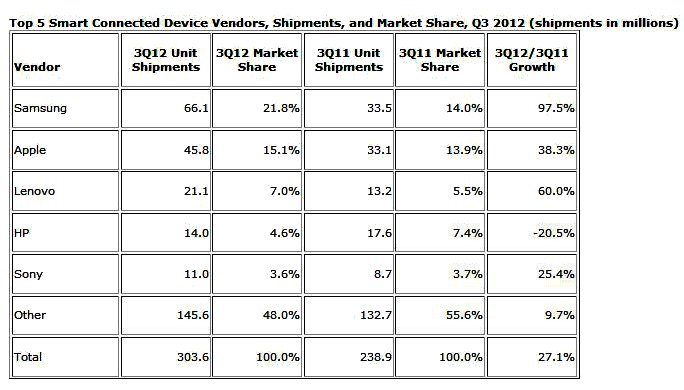 Source: IDC worldwide quarterly smart connected device tracker
Claiming third spot behind Apple is Lenovo with its 7% share of the market, whilst HP (4.6%), and Sony (3.6%) completes the Top 5.

Unlike the other firms in the Top 5, HP did not  manage to increase its market share. This comes down to the company’s lack of device representation within the mobile space (smartphones and tablets), with the firm decreasing its stake in the market from 7.4% in Q3 2011 to 4.6% for Q3 2012.

Beyond Q4 2012, IDC expects the worldwide smart connected device space to keep on growing. The firm predicts that shipments will surpass 2.1 billion units during 2016, with the global market value of these devices coming to $796.7 billion.

According to IDC we have entered the multi-device era, as the market dynamics are shifting in terms of product category. Last year, desktop PCs and notebooks accounted for 39.1% of the smart connected device market, and this year this figure has come down to 29.7%. By 2016, IDC expects these devices’ market stake to decrease even further to 19.9%.

“Both consumers and business workers are finding the need for multiple ‘smart’ devices and we expect that trend to grow for several years, especially in more developed regions,” said Bob O'Donnell, program VP of the Clients and Displays division at IDC. “The advent of cloud-based services is enabling people to seamlessly move from device to device, which encourages the purchase and usage of different devices for different situations.”

In other market research related news, analytics firm ABI Research recently revealed that it expects ultrabook shipments to increase to 21 million devices by the end of this year.