Market research firm, comScore, recently released the latest data from its MobiLens service, looking at key trends in the US mobile phone industry over the three month period ending May 2012. The analytics firm’s study surveyed more than 30 000 US mobile subscribers.

As during May, the study found Samsung to be the top handset manufacturer overall with its 25.7% market share. Google’s Android also continued to enlarge its mobile operating system (OS) stake Stateside, accounting for 50.9% of smartphone subscribers, while Apple accounted for 31.9%.

For the three-month average period ending in May, 234 million Americans age 13 and older employed mobile devices. Korean tech giant Samsung ranked as the top OEM (original equipment manufacturer) with 25.7% of US mobile subscribers using one of the firm’s smartphones, followed by the company’s Korean neighbour LG and its 19.1% share.

The Cupertino-based iPad and iPhone maker Apple completed the top 3 with its 15% (up 1.5 percentage points) market share, with Google-owned Motorola Mobility trailing at fourth with 12% and HTC fifth via its 6.1% stake. 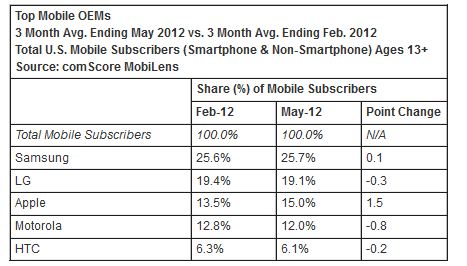 comScore stated that almost 110 million people in the US owned smartphones during the three months ending in May, which is an increase of 5% when compared to February. Google’s Android continues to dominate the mobile OS landscape, claiming over half (50.9%) of the market share.
The iPhone has been around for five years now, assisting Apple to reach its current smartphone market share of 31.9% as of May. RIM (Research In Motion) came in third with its 11.4% share, whilst Microsoft’s Windows Phone OS claimed a 4% stake and Symbian a further 1.1%. 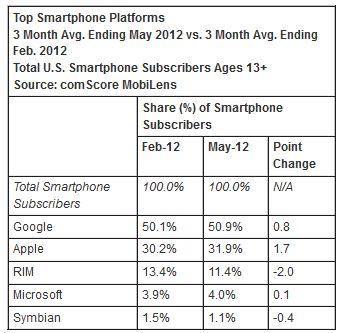 Table: comScore
In related news, Mozilla is aiming to stake a bigger claim in the mobile market via its own mobile platform, dubbed Firefox OS, the company’s new fully open smartphone ecosystem, which is based on HTML5.
TAGS:
comScoreUSmobile industrysmartphonemobile OSmobile platform
USER COMMENTS