Market research firm comScore recently released the latest data from its MobiLens service, which looks at key trends in the US mobile phone industry for the three month period ending January 2012.

The study surveyed over 30 000 US mobile subscribers and found that Samsung was the top handset manufacturer overall, while Google’s Android came out tops in terms of mobile operating systems (OS). Within this three month time-frame, 234 million Americans age 13 and older used mobile devices.

Korean-based device manufacturer Samsung ranked as the top OEM (original equipment manufacturer) with 25.4% of US mobile subscribers opting for one of the company’s mobile devices.

Samsung was followed by LG with its 19.7% share and Motorola Mobility with 13.2% share. Like Google’s Android, Apple also continues to capture share in the OEM market with 12.8% of total mobile subscribers (up 2.0 percentage points), while BlackBerry maker RIM (Research In Motion) rounded out the top five with 6.6%. 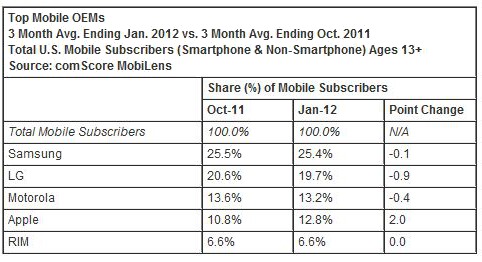 In terms of smartphones, the number of US subscribers surpassed the 100 million mark during January, climbing 13% from October to reach 101.3 million subscribers. Google Android ranked as the top smartphone platform with 48.6% market share (up 2.3 percentage points), followed by Apple’s iOS with 29.5% market share (a growth of 1.4 percentage points).

RIM’s BlackBerry OS ranked third with 15.2% share, while Microsoft’s Windows Phone OS platform attracted some fringe users along with Symbian, as each mobile OS claimed respective market shares of 4.4% and 1.5%. 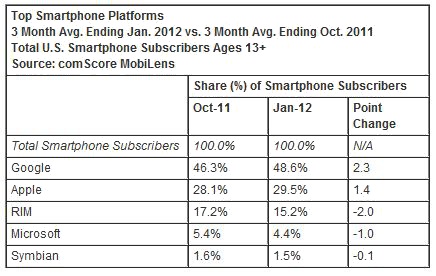 In other mobile related news, Nielsen released its latest report at the beginning of the year, which showed that the launch of Apple’s iPhone 4S had an impact on the proportion of US smartphone owners who opted for an iPhone over an Android-powered device.
TAGS:
comScoreUSsmartphone OSmobile OSsmartphoneAndroid
USER COMMENTS