Market research firm comScore recently released the latest data from its MobiLens service, which looks at key trends in the US mobile phone industry for the three month period ending February 2012.

The study surveyed over 30 000 US mobile subscribers and found Samsung to be the top handset manufacturer overall with 25.6% market share, whilst Google’s Android mobile operating system (OS) continues to grow its share in the US smartphone market. The search giant’s OS surpassed the 50% mark during February.

For the three-month average period ending in February, 234 million Americans age 13 and older used mobile phones. Korean tech giant Samsung once again came up tops as the number one OEM (original equipment manufacturer) with 25.6% of US mobile subscribers opting for one of the company’s devices.

Hot on Samsung’s heels is its Korean neighbour LG with its 19.4% share. Apple overtook Motorola Mobility to claim third spot on the OEM podium, as the Cupertino-based tech outfit took a bigger bite out of the US market (an increase of 2.3 percentage points) to claim a 13.5% stake.

Motorola was relegated to fourth position, claiming 12.8% of the US handset market, whilst Taiwanese smartphone and tablet maker HTC moved into fifth position in February, as it managed to obtain a 6.3% market share. 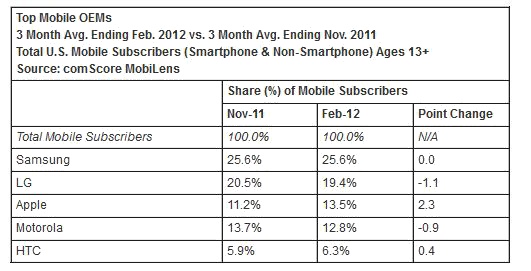 According to comScore, over 104 million US mobile phone users were using smartphones during the three months ending in February, representing an increase of 14% when compared to the three month period that ended in November 2011. Android’s share of the smartphone market crossed the significant 50% mark within February, whilst Apple’s iOS ranked second with 30.2% of the smartphone market (an increase of five percentage points versus year ago). iOS was followed by RIM’s BlackBerry OS at 13.4%, Microsoft’s Windows Phone OS at 3.9% and Symbian at a stagnant 1.5%. 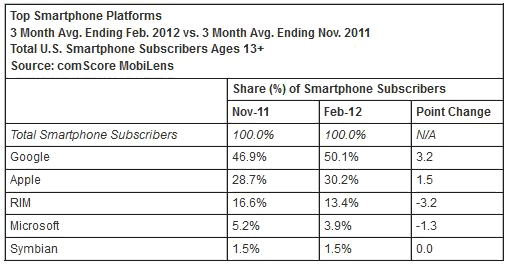