The latest South African Customer Satisfaction Index (SAcsi) for Mobile Data Service Providers reveals that South African consumers express low levels of loyalty to their mobile data service providers and are generally disappointed with the service they receive from them.

Customer loyalty trends have shown a consistent decline over the past three annual indices, with the industry average declining from 71.1% in 2014 to 59.2% in 2016.

MTN’s customers show the lowest loyalty to their brand with a score of 54.7%, down almost 10% from 2015, followed by Telkom Mobile at 59.2% compared to 67.7% last year. Cell C and Vodacom compare well with the customer loyalty industry average (59.2%) with scores of 61% and 61.6% respectively, albeit low in comparison to other industries measured in the SAcsi.

“South Africans are limited to a handful of mobile data service providers who are among the most expensive in the world.This frustration is evident in the ongoing #DataMustFall movement that adds impetus to the views that South Africans have held for years: they feel ripped off by high data costs, and will move to a more cost-effective service provider without hesitation,” says Prof Adré Schreuder, CEO of Consulta.

This is further indicated in the Net Promoter Score (NPS), which is calculated as the difference between the percentage of promoters or customers who recommended your brand, and detractors or customers who did not recommend your brand. The NPS yielded an industry average of 1%. Telkom received the lowest sentiment with a score of -9%, followed closely by MTN at -4% with Cell C narrowly above the industry average at 2%. Vodacom received a score of 9%.

The 2016 SAcsi for Mobile Data Service Providers benchmarks customer satisfaction through an internationally recognised model to achieve an overall result out of 100. The index provides a weighted average of the various aspects of a customer’s experience with the mobile data service provider, and the degree to which the product or service has met, fallen short of, or exceeded their expectations.

The data returned in this index reveals some of the lowest sets of scores across the SAcsi industries surveyed by Consulta this year.

The average industry score for the 2016 SAcsi Mobile Data Service Providers is 67.8 out of a score of 100. A score below 70 on the SAcsi is deemed low. The SAcsi score has continued declining over the past three years, this year MTN received the lowest score at 65.9 followed by Cell C (66.2), Telkom Mobile (68.2), with Vodacom marginally leading the industry average with a score of 69.7.

Looking at the ability of mobile network providers to deliver the services they promise, Cell C came the closest to delivering on this. Cell C also obtained the lowest percentage of customer complaints and the highest score for successfully handling customer problems and complaints. Telkom Mobile and MTN customers experienced the largest service delivery gap, indicating that these service providers are not living up to customer’s expectations to the degree that Cell C customers reported.

“It seems that Cell C is the only brand not creating unrealistic expectations that they are unable to meet,” says Schreuder. “Telkom Mobile’s low score may be linked to its recent uncapped LTE promotion, which it released without fully explaining the fair-use policy attached to the offer.”

The provision of mobile data is a fast moving and highly competitive industry. The service provider that is able to address the reasons for the continuous decline in customer satisfaction and service delivery, will be able minimise customer churn and regain customer loyalty.

The full report is available from Consulta. 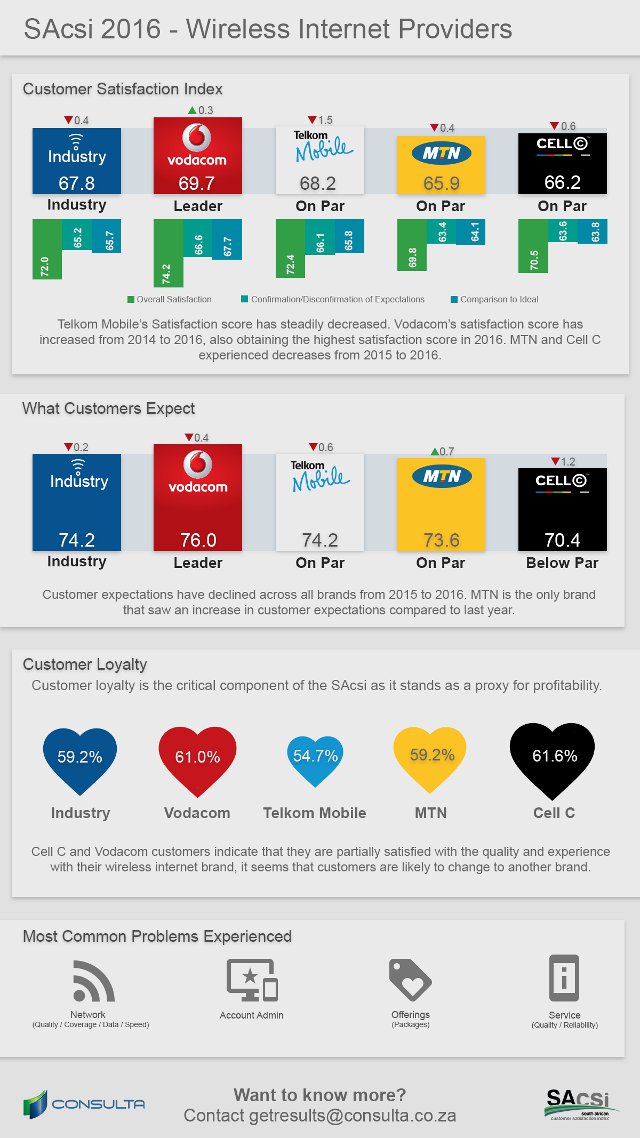