If you’re a South African woman who is thinking of going into business for yourself, yet fear the financial risks of doing so, you are not alone.

New research conducted by Livingfacts commissioned by Sage Foundation, reveals that more than 50% of women believe corporate jobs are ‘a safer option’. And, only 20% of those who don’t own a business felt they have the necessary network to support their family responsibilities. The study pinpoints a need for financial stability and a low tolerance for risk-taking and failure are among the most significant factors holding back female entrepreneurship in South Africa.

Undertaken in partnership with the International Women’s Forum South Africa (IWFSA), the research highlights the obstacles that women face, including:

· a lack of exposure to entrepreneurial role models in their families and communities;

· the challenge of juggling personal and work responsibilities.

Nonetheless, the research also shows that South African women admire entrepreneurs and increasingly see entrepreneurship as a viable pathway to personal growth and wealth creation. Sage Foundation and IWFSA unveiled the study at a breakfast for IWFSA members, business partners, customers and entrepreneurs at The Park House of Events on 7th in Hyde Park, Johannesburg on 25 July.

Sage Foundation and IWFSA conducted the research to fill the gap for data about the motivations and aspirations of South African women in the formal business sector. Sage Foundation has made a global commitment to women as part of its effort to build sustainable social, economic and entrepreneurial opportunities in Sage’s local communities around the world – but helping starts with having the right information at hand.

The study provides fresh insight into what drives South African women to establish businesses of their own, why they succeed and why they fail. The research highlights how critical it is for NGOs, government policymakers and other stakeholders to position entrepreneurship as a viable career path for young women and to provide them with mentoring and support as they build their businesses.

Only 20% of women in the survey and a mere 16% of respondents who do not have their own business agreed that having your own business was seen as a viable career choice when they were growing up. Most women saw corporate jobs as a safer option, with more than half (51%) saying “it is definitely important to me to have financial security and a stable salary”. Nearly a quarter of women saw losing these benefits as a deterrent to starting their own businesses.

The research indicates that few women get exposure to entrepreneurial role models in their formative years, with only 15% saying that they definitely had family and friends who often talked about business when they were young and only 29% who said that there definitely was a successful business owner in the family and extended family.

The lack of a role model carries through into women’s careers and later lives, too: only 14% of women reported that they have a business mentor or role model.

“Young women need to be exposed to the possibilities and the benefits of having their own business at home, in their communities and schools, and in the media”, says Joanne van der Walt, Sage Foundation Programme manager for Africa.

Some 59% of respondents who quit corporate jobs to set up a business said a key reason for doing so was that they wanted flexibility around how they managed family and work commitments. Yet 19% who gave up their entrepreneurial ventures to return to the corporate world cited a need for flexibility as the reason they went back to full-time employment.

Only 20% of those who currently don’t have a business felt they definitely had the necessary network of family and friends that can support their family responsibilities. What’s more, a higher percentage (70%) of women running their own businesses were married or living with someone who provides support, financially and in other ways.

Says Van der Walt: “Starting and running a business is far more time intensive than many women realise. Often, for women, a nine-to-five corporate job allows for more time with one’s family, and would-be entrepreneurs struggle to maintain balance between work and their personal lives – especially in the first few critical years of building a business. Changing gender stereotypes of who does what in a family and women overcoming their own reluctance to ask for help are key changes that could encourage female entrepreneurship.”

Female entrepreneurs show more appetite for risk than women who have not gone into business. The research found that 26% of women who did not have a business said they were not afraid to take risks, compared to 43% who had their own business. Meanwhile, 37% of those that never had a business thought it was scary to be in business for yourself.

“Many families encourage young women to look for government or corporate employment, seeing this as a lower risk route for their future careers,” comments Van der Walt. “Yet with youth joblessness at above 50%, many of our young women may never have a corporate job. We need to help young women see the risks and potential failures of entrepreneurship as learning experiences on the road to growth and prosperity.”

Female entrepreneurs are finding access to capital and funding to be as much of an obstacle to starting their own businesses as their male counterparts in South Africa – if not more. Most (84%) women started a business using their own savings to do so; very few obtained funding from traditional banks and even less knew about venture capital, angel or seed funding, grants, or crowdsourcing.

Some 61% of women who have never had a business cited not having access to money or capital to start their own business, as a barrier, while 33% of those who went back to corporate jobs after starting a business said it was a key stumbling block.

5. The rewards of being your own boss

The study confirmed that women are attracted to the benefits of being rewarded for their own efforts and the freedom to be their own boss when it comes to entrepreneurship. They also saw entrepreneurship as a way to find personal growth and meaning, make a difference, achieve financial independence, give women a voice and control of their own futures, and create and innovate. 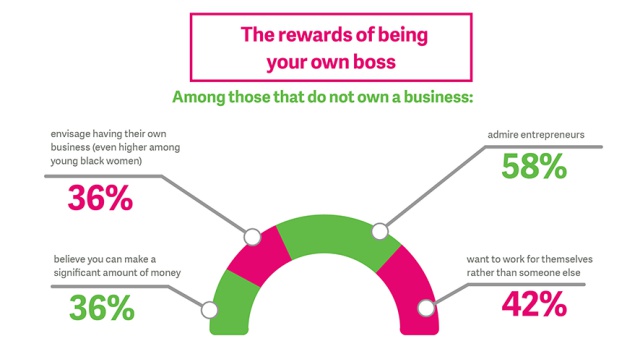 Among those that do not own a business:

· 42% want to work for themselves rather than someone else

· 36% believe you can make a significant amount of money

“The emergence of a growing community of female entrepreneurs is one of the most significant economic and social developments in the world. It is not merely redefining women’s economic roles; it is reshaping the modern global economy,” says Van der Walt. “Our research shows that this trend is also unfolding in South Africa – but it also highlights how much more we need to do to unleash the full potential of our country’s female entrepreneurs.”

Says Mpho Letlape, deputy president at IWFSA: “It's a privilege to partner with Sage Foundation for this initiative. Research is vital for understanding how women are moving forward in the South African business world.  With more insight into the challenges facing businesswomen and female entrepreneurs, we can focus on the areas where intervention is most needed.  Right now, women leaders have an opportunity to make a difference in society, and help heal our nation.”

Sage Foundation will use the findings of this research to engage with policymakers and social NGOs about ways to encourage and support female entrepreneurs – starting from their school years. Sage Foundation already works with NGOs that support financial literacy programmes at primary and high school level. It will look for more NGO partners that it can work with to help remove some of the barriers that women face when they go into business for themselves.