During Q4 2012, global PC shipments totaled 89.8 million units, marking a drop of 6.4% compared to Q4 2011 and also a worse decline than the forecasted figure of 4.4%. This, according to market research firm IDC’s (International Data Corporation’s) worldwide quarterly PC Tracker service.

It was in the final quarter of last year that Microsoft launched its new Windows 8 desktop and tablet operating system (OS) and the analytics company said that this new OS did not quickly change the recently sluggish PC demand.

The PC market continued to take a backseat to competing devices the likes of smartphones as well as tablets, also suffering under sustained global economic woes. As a result, Q4 2012 marked the first time in more than five years that the PC market has seen a year-on-year decline during the holiday season.

“Although the third quarter was focused on the clearing of Windows 7 inventory, preliminary research indicates the clearance did not significantly boost the uptake of Windows 8 systems in Q4,” said Jay Chou, senior research analyst with IDC’s Worldwide Quarterly PC Tracker.

“Lost in the shuffle to promote a touch-centric PC, vendors have not forcefully stressed other features that promote a more secure, reliable and efficient user experience. As Windows 8 matures, and other corresponding variables such as ultrabook pricing continue to drop, hopefully the PC market can see a reset in both messaging and demand in 2013,” Chou concluded.

The US market struggled during Q4 2012, although some consumer activity took place in conjunction with the release of Windows 8. According to IDC however, due to the limitations in product offerings, in particular for touchscreen tablet PCs, consumers put off new purchases.

“As anticipated, the US market had a rough ending, dropping 4.5% in the fourth quarter and contributing to a decline of 7% for the full year 2012,” said David Daoud, research director, IDC US Quarterly PC Tracker.

“Consumers expected all sorts of cool PCs with tablet and touch capabilities. Instead, they mostly saw traditional PCs that feature a new OS (Windows 8) optimised for touch and tablet with applications and hardware that are not yet able to fully utilise these capabilities. Despite a generally weak performance, some leading brands managed to do well relative to the market. HP, Lenovo, Asus, and Samsung were among the top performers, taking advantage of some consumer interest in Windows 8, and a push to build up their presence ahead of 2013.”

Within EMEA (Europe, Middle East, and Africa), PC shipments declined at a mid single-digit rate from a year ago. The sales rate of Windows 8 systems received a boost around early December, with the arrival of a few new Ultra Slim offerings. However, consumers went on to shun PC purchases in favour of more attractively priced tablets and smartphones, particularly during the Christmas shopping season. Commercial purchases by companies also remained weak, due to persisting uncertainty in the economic situation across the region.

Japan registered some slightly positive growth as the impending end of Windows XP support helped to boost commercial shipment volumes. Outside of Japan, the Asia/Pacific region came in slightly below forecasts, as channels in most countries focused on clearing out existing Windows 7 inventory, before bringing in fresh Windows 8 stock. 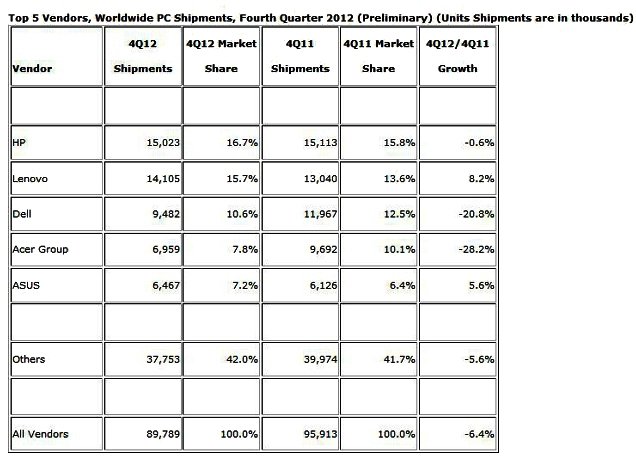 According to IDC, HP continued to defend its top position as number one PC vendor with an aggressive push for Windows 8 volumes, which assisted the vendor make gains in Asia/Pacific as well as its home turf in the US. HP struggled in EMEA though, but posted the first year-over-year growth in Asia/Pacific in four quarters. Total volume was nearly flat from a year ago, but better than the overall PC market.

China’s Lenovo once again outpaced the market with growth of more than 8%. Shipment volumes reached a new record-high of more than 14 million units, with continued success in channel wins in the US as well as EMEA region. Despite the positive performance, Lenovo’s gains remained significantly smaller than several quarters ago when the company was besting market growth by almost 30%, IDC added.

Dell continued to lose ground as it faces aggressive competition from competitors, as the firm’s global shipments dropped by nearly 20% year-on-year. Besides key markets such as the US, Dell’s PC shipments did manage some form of sequential market growth.

Acer, like a few other vendors, remained heavily dependent on consumer spending and as a result the company continued to suffer as consumers spend their money on other tech products. IDC asserted that Acer’s cautious approach to the Windows 8 transition has contributed to a slowing down of its notebook shipments.

Asus not only managed to hold onto its top 5 spot globally, but also enlarged the distance between itself and other consumer-focused vendors with a growth rate of 5.6% year-on-year. The firm racked-up strong gains across many regions, where it offered innovative, yet price-conscious products that sold in numbers despite increasingly tough economic conditions.