Spammers put the shoulder to the wheel last month in an effort to lure unsuspecting PC users into clicking on their malicious website links, coming up with new ways to hook users. However, good news for PC users is that the proportion of spam within email traffic continued its gradual decline in the month of June 2012.

This according to Kaspersky Lab’s latest monthly report on spammer activity, which revealed that spam fell by a further two percentage points compared to May, averaging 71.9% for the month.

Although the occurrence of spam declined, spammers employed new techniques in an effort to infect user’s PCs. For example, the kick-off of the European holiday season led to the launch of a mass mailing of fake hotel reservation notifications, accompanied by a malicious attachment.

Kaspersky noted that in order to avoid falling victim to this sort of scam users should be particularly careful when booking trips online and remember that no respectable tour firm will send reservation confirmations as a zipped archive.

The Russian web security firm stated that in the not too distant past spammers were making active use of a social engineering trick that involved the sending of malicious code in an email attachment, which supposedly contained a photo of a girl who wanted to befriend the recipient.

Within June, a new version of this photographic theme was discovered, whereby the recipient was threatened with legal action for posting photos online without the owner’s consent. These photos in question were supposedly attached to the email in the form of a zipped archive.

Another photo related spamming technique involved fake notifications about fines for traffic violations, with the archive attached to the message being passed off as a set of incriminating photos taken by the traffic department’s surveillance cameras. In reality the archived attachment actually contains a malicious programme. 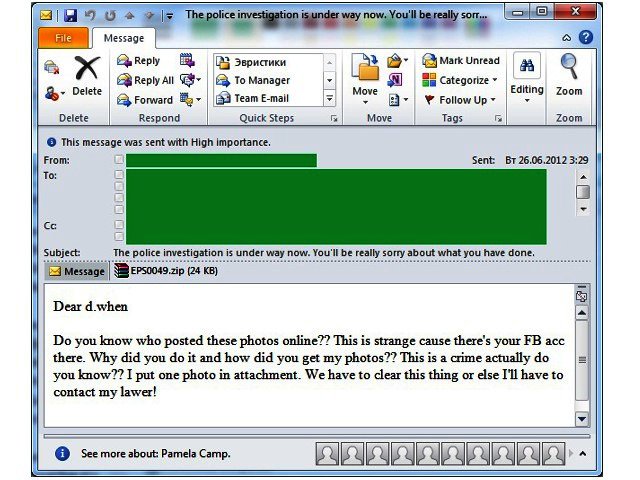 Unsurprisingly, the most popular event of the month was the 2012 European Football Championship, which lasted the whole of June. Spammers started spreading Euro 2012-related mass mailings at the beginning of the year already, with offers to buy tickets for fan zones, as well as offers to rent apartments in the host cities. June heralded the arrival of spam that advertised football sites dedicated to the tournament.

Stateside, Americans celebrated one of their main national holidays on the 4th of July, namely Independence Day. This holiday was accompanied by a wave of spam offering fake designer watches and various other accessories as suitably themed gift ideas. There were also mass mailings advertising flags to help US citizens express their patriotic spirit. 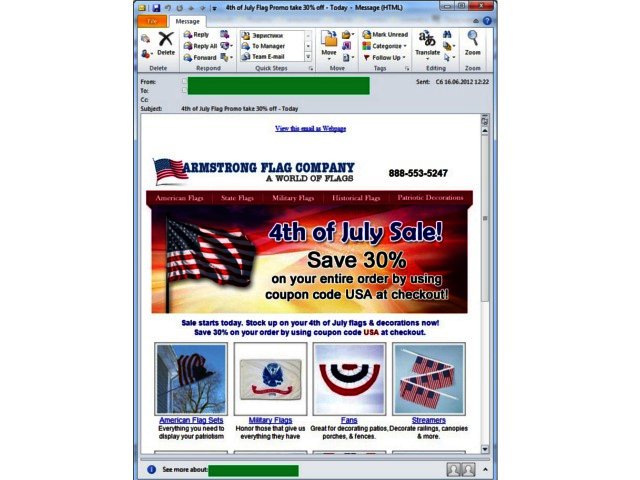 Sources of spam by country

According to Kaspersky Lab, the share of all spam received by European users that originated in China increased by almost 50% compared to May. The UK was the only European country in May’s rating that didn’t make it into June’s Top 20. Among the leading distributors of spam in the European region were two other European countries, Italy (1.5%) and Germany (0.91%), with over half of all the spam distributed in Europe still emanating from Asia.

Once again, the Top 20 rating of countries that distributed spam to the US during June was topped by the US itself. Kaspersky said that for the second month in a row more than one third of all US spam was “homemade”, whilst a quarter of the spam distributed on US territory is of Asian origin.

“The proportion of spam in total mail traffic continued to fall for the second month in a row. A drop of 2-3 percentage points may not sound very much, however it could signal some major changes are taking place,” stated Maria Namestnikova, senior spam analyst at Kaspersky Lab.

“Summer is a quiet season in terms of business activity, when the amount of spam falls together with the overall volume of email traffic. That’s why only a significant decrease in the volume of unsolicited emails will lead to such a noticeable drop in the proportion of spam in overall mail traffic.”

The full version of the spam report for June 2012 is available at Securelist.com.

In related news, Kaspersky Lab also recently warned that all that precious data sitting in one’s mobile devices could quite easily fall into the hands of cyber criminals, with the culprit for this eventuality being that tempting free Wi-Fi that users take advantage of.