Toshiba  announced today that it is expanding its tablet range with the addition of the Thrive, a 7” model boasting a backlit AutoBrite multi-touch display, complete with pixel dense 1280 x 800 resolution.

The tablet will pack a dual-core Nvidia Tegra 2 processor along with Nvidia Geforce graphics for gaming and run off Android Honeycomb 3.2. The new tablet, which will launch in the US in December, will be available in both 16 GB and 32 GB versions.

While the 10.1” model, the AT100, which was recently launched locally, sported an abundance of full size ports such as USB, SD and HDMI – it also had the weight (a hefty 765 g) to match. The 7” tablet will weigh in at nearly half that (399 g) but offer smaller ports, in the form of miniUSB, microHDMI and a microSD card slot.

Also making an appearance will be a built-in gyroscope that offers hands-on motion control (for gaming) and two HD cameras: a five megapixel camera with an LED flash on the back for capturing pictures and video and a two megapixel camera on the front for video chatting. As would be expected, integrated GPS, Wi-Fi and Bluetooth functionality are also included. 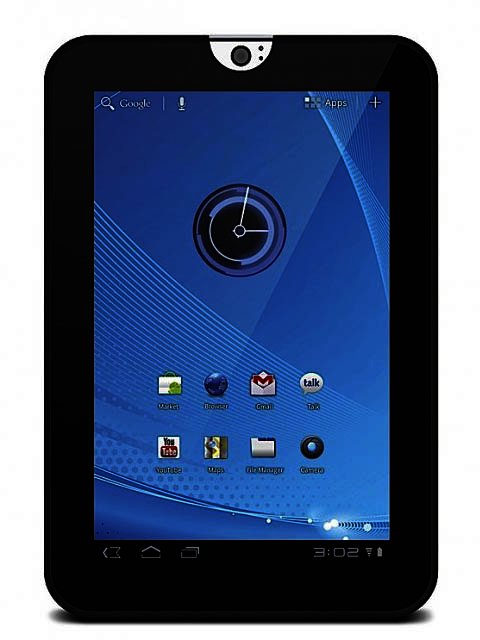 Toshiba's new 7" tablet will be available in 16 GB and 32 GB versions.
Two of the features highlighted at the launch of Toshiba’s 10.1” AT100 tablet, will apparently be included in the smaller version. The first of these was Toshiba's exclusive Adaptive Display and Resolution+ video enhancement technologies, as well as stereo speakers that were tuned with sound enhancement technologies from Toshiba and SRS Labs. This, the company claimed, would deliver richer audio in music and movies. In our experience with the AT100, it was certainly loud enough.

The second aspect that we appreciated was the finish on the tablet, which the company explained was its “durable and slip-resistant Easy Grip finish”. While nice to have on a 10.1” device, it is even more relevant on a more portable  7” tablet, that will likely be used in one hand.

"This is a seven-inch tablet done right," said Carl Pinto, vice president of product development, Toshiba America Information Systems, Digital Products Division. "The Thrive 7" Tablet is the first seven-inch tablet in the U.S. market to offer a true HD display that, when combined with the selection of ports, premium audio, and a better, more robust Android experience make it a great choice for on-the-go consumers looking for a no-compromise tablet."

There’s no word yet as to the local launch window, although Domenico Gargarella, the regional general manager for Toshiba South Africa, did hint that more Toshiba tablets would be forthcoming in the future.