Facebook is in the process of testing out a new real-time update feature known as 'Happening Now'. The new news feed will function in a similar way to Twitter's constantly updated feeds, and may give the micro-blogging champions a run for their money.

The feature is still in the testing phase and has so far been rolled out to only a tiny fraction of Facebook's more than 600 million users.

When implemented, the new 'Happening Now' feed will sit on the right side of the Facebook interface and will display a constant stream of new updates and likes.

Facebook told The Next Web, “We are currently testing a feature within News Feed that gives people the ability to see what their friends are commenting on and 'liking', as these actions are being taken on Facebook.”

The world’s largest social network further stated that tests will be continuing over the coming weeks and that, “we'll keep making making improvements and may expand it to more people.”

The new feed will allow users to receive constant real time updates from friends without having to navigate away from their main page. Users will be able to see a condensed version of what their friends are up to on the feed, for example, “John just liked this new photo”. Users can then click on the post in the 'Happening Now' feed to see more details.

Below is a screenshot of how the new feed will be implemented into Facebook's design (the far right window). The question now is, how will this affect Twitter? 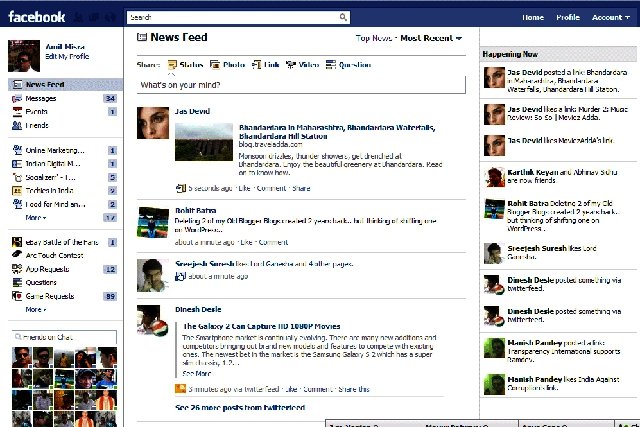 The updated profile of Amit Misra from Dazeinfo.