HOMEREVIEWSNEWSBUSINESSCONTACTMAGAZINE
You are in: HOME > gadgets > smartwatch
PREVIOUS ARTICLENEXT ARTICLE

In general, Garmin watches are usually considered by those more interested in decent fitness tracking than pure smartwatch features. The Venu 2 Plus, however, makes a strong play towards the smartwatch side of the market by offering a solid contingent of features without skimping on that for which Garmin is known best.

Out the box you get Voice Assistant access (the main difference between the Venu 2 Plus and the Venu 2), Bluetooth calling and answering calls, NFC integration (for Garmin Pay), a lovely OLED screen, great battery life and array of fitness orientated features. Personally, having used the Fitbit Versa 3 as my personal watch for ages, it’s really easy to recommend the Venu 2 Plus not just to those who are getting more serious about their running (and other activities), but also as a general wear smartwatch.

The Venu 2 Plus comes in a 43mm model only and I was surprised to see it a fair amount larger and heavier (51 g vs 39 g) than my Forerunner 245. It’s worth noting that it was not much more cumbersome to sleep with or to run with, with the larger screen actually helping with viewability on the road (women might prefer the 40mm Venu 2S). 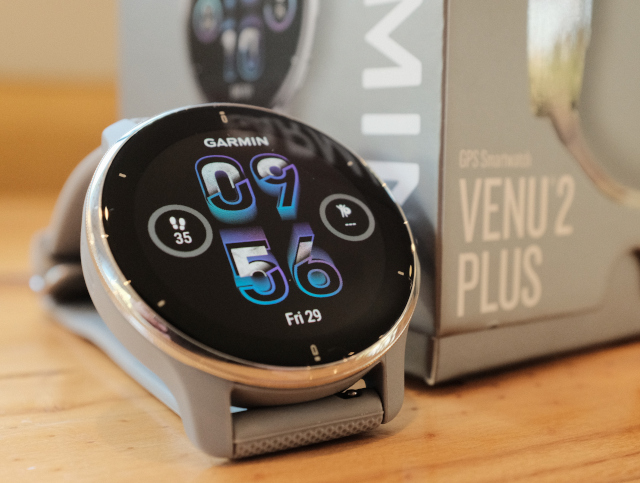 One thing that Garmin got right is the screen, thanks to a 1.3” AMOLED touchscreen doing duty with a 416x416 pixel density. It’s decently bright outdoors and the watch faces and graphics are far more crisp compared to Garmin’s non-AMOLED watches. The display is made from Gorilla Glass 3 so it’s set to protect against scratches, and, importantly, the screen is quick to activate when turning your wrist.

Navigating the watch is perhaps less intuitive than say, on the Huawei range. Instead of allowing a left or a right screen swipe to access menus, the Venu 2 Plus depends a lot more on tapping or holding the three side buttons. For example, long pressing the top right one brings up the shortcuts menu, which could have been easily provided by a downwards swipe on the screen.

Having said that, swiping up does bring up the Glances screen, which is an excellent overview of all aspects of the activity tracking that takes place, including steps, intensity minutes, heart rate, respirational rate, Garmin’s excellent body battery tracking, stress, sleep, weather, fitness age and more. Tapping on each provides further screens that goes into more details and selection options.

Overall, I found the Venu 2 Plus a lot easier to use than some of Garmin’s other units, although new users will need a bit of time to get used to it. 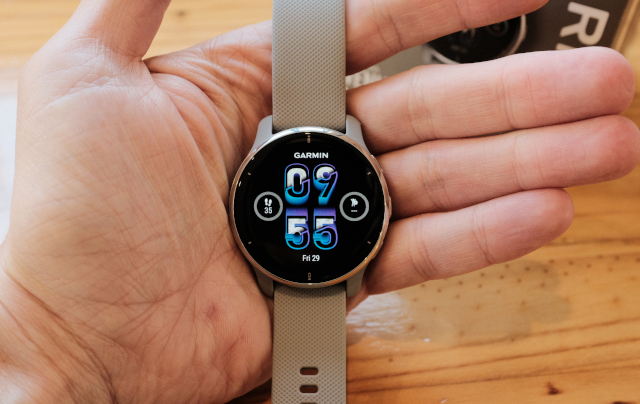 For some reason Garmin still needs you to download two apps to get the most out of the Venu 2 Plus. Firstly Connect, which provides you with overviews and insights on your smartphone from the data drawn from the watch; essential if you want to see, for example, more info on your runs. Secondly, Connect IQ must be installed if you want extra watch faces, apps or data fields (extra/curated data displayed on your watch while doing an activity).

The one thing Garmin is extremely good at is the sport orientated side of things, arguably with run tracking as the most NB. This was my reason for moving to Garmin, as the insights I wanted on my runs were simply not available through Fitbit. Heart rate data and GPS signal quality are also tops, and the company’s legacy in the running segment shines on the Venu 2 Plus too.

However, keep in mind that Garmin tier their watches, making sure that certain data is available in some but not in others. On the Forerunner 245 you’ll receive your training status and recovery time after your run, which you don’t on the Venu 2 Plus. The Venu 2 Plus provides a decent enough overview of the run and a heart rate recovery report, which is not on the Forerunner 245.

The Venu 2 Plus also provides on-screen animation of different HIIT, Yoga and Pilates workouts, so it’s not just meant for running. You can also pick different coaches if you are training for specific running distances, with suggested workouts then available on the watch.

If you would like to compare different Garmin watches to see which one might suit you best, you can do so here: https://www.garmin.com/en-US/c/wearables-smartwatches/?series=BRAND481&sorter=featuredProducts-desc. 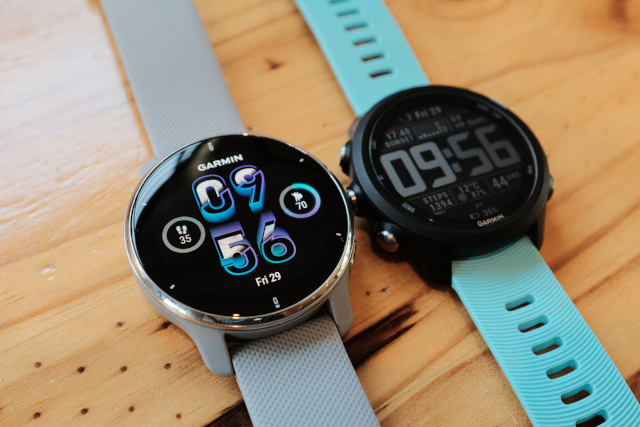 The Venu 2 Plus next to the Forerunner 245 Music.

I was really impressed with the Venu 2 Plus’s battery life. Garmin notes nine days of battery life in smartwatch mode, and I managed to get a week’s worth of battery, and that was with about seven hours of GPS usage, but with Pulse OX monitoring off during the night.

The Venu 2 Plus allows you to not only connect via the push of the centre button to your smartphone’s voice assistant, but also calling and answering on the watch itself. The answering of calls works well and the speakers are loud enough, at least in my home office space. Making calls on the watch are more awkward and you might want to use your voice assistant to do so. 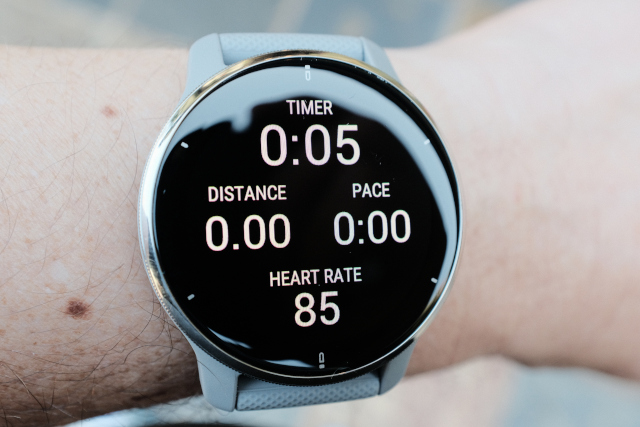 The main screen that pops up when running

Best of both worlds

Taking into account all its features, there is smartwatch that could be considered direct competition to the Venu 2 Plus. Huawei’s most recent Watch GT Runner, aimed as the name states at runners, comes in at R7 500 compared to R8 999 for the Venu2 Plus. The GT Runner has been getting good reviews, especially for its battery life and how accurate its heart rate tracking is. I’ve not tested the watch, but in my general dealing with Huawei smartwatches in the past I found that they’re solid devices, providing an easy to manage interface and decent activity tracking features. That said, the restriction of Google services on Huawei products means you won’t be able to get Strava working unless you work through a third-party app, which works fine for some but not always for others. 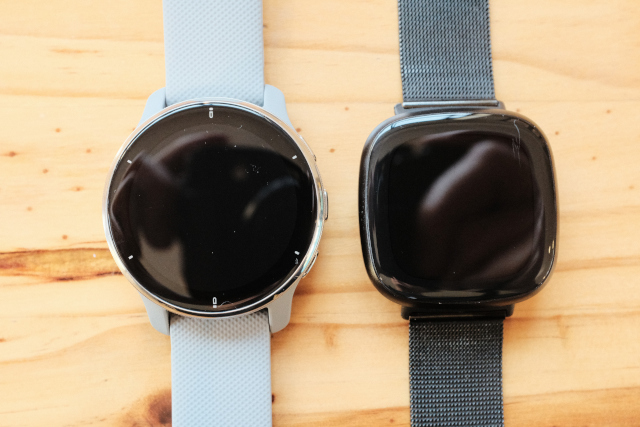 The Venu 2 Plus next to the Fitbit Versa 3

Fitbit on the other hand provides top of line sleep tracking (the Venu 2 Plus doesn’t track naps) and have incorporated new sensors such as ECG and EDA in the newer Fitbit Charge 5 and Sense. What is true is that while the Venu 2 Plus remains a significantly better running tracker than what Fitbit has produced so far, with the Forerunner range the step up for more serious runners.

I’m not too sure if there were many runners out there who didn’t buy a Garmin because of a lack of smartwatch functionality. However, a smartwatch orientated market meant that Garmin had to up their game on that front to ensure future sales, and that they certainly did with the Venu 2 Plus.

It’s the ideal smartwatch for those looking for Garmin’s strong running/fitness orientated ecosystem without losing out on the smartwatch functionality they’ve gotten used to with other brands’ devices. At R8 999 it retails at the higher end of the spectrum, competing against the Apple Watch Series 7 and the Samsung Galaxy Watch4 Classic with embedded SIM. However, if you don’t mind forgoing on the voice assistant feature and Bluetooth calling, the Venu 2 retails at R7 500, is your best bet.

CONS
Not good at tracking naps, onscreen navigation could be made easier, expensive, have to use two apps
TAGS:
Garmin Venu 2 PlusGarminsmartwatchrunningGPS
USER COMMENTS