Demons may cry, but players can rejoice
9.3    Gameplay
9.0    Story
9.3    Presentation
8.8    Lasting appeal
4.5
We have been keeping a close eye on Ninja Theory’s reboot of the Devil May Cry franchise for quite some time now, and the big question on our, and many a fans' mind, has been whether the Heavenly Sword developer would do the long running franchise justice.
To put anxious minds at rest from the get-go, our conclusion is that neither we nor fans need to have fretted, as the game is everything we hoped it would be.
The story, in brief, revolves around Dante, who is approached by The Order, a resistance group led by his long lost brother Vergil, to help him defeat the demons which have nefarious plans for Earth.
Along the way, an equally as compelling story revolves around Dante’s mother (killed by a particularly nasty demon) and father (imprisoned by the same) about which, you would imagine, neither Dante nor Vergil are particularly pleased. Revenge is not just a dish best served cold, in Dante and Vergil’s eyes, it should also be sliced, diced and served bloody as well. 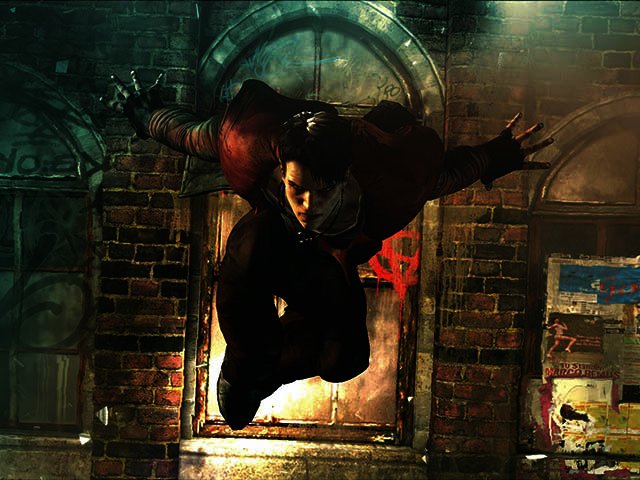 The Demon War actually started when some foolhardy demon made
the mistake of calling Dante 'Neo.'
Stuck in Limbo
Much of the battle takes place in an alternate reality of sorts known as Limbo, and it is here that Dante is dragged in, or voluntarily enters, to battle the demons. In a particularly nice touch, the results of Dante’s escapades on the ordinary world are shown via newsfeeds, and the disparity between what actually happened and the story that is spun is at times quite amusing.
Indeed, DMC is a clever game in many respects, laden with social commentary about how people are manipulated and deceived by corporations and media alike, with more than a touch of irony. For example, the poison – cleverly disguised as a soft drink – which demons use to keep humanity complacent is named Virility, while its consumers are anything but virile.
In one early cutscene, an obese man lumbers past a poster of an advert of a male model promoting Virility, and the disconnect between the advertised, promoted truth and reality is stark and startling. In fact, it can be seen as a metaphor for the game’s main premise.
While Dante does have that brash, rebel without a cause swagger of independence, this is nicely complemented by the interaction he has – and sporadic help he receives – from Kat – a mysterious psychic with a story of her own. 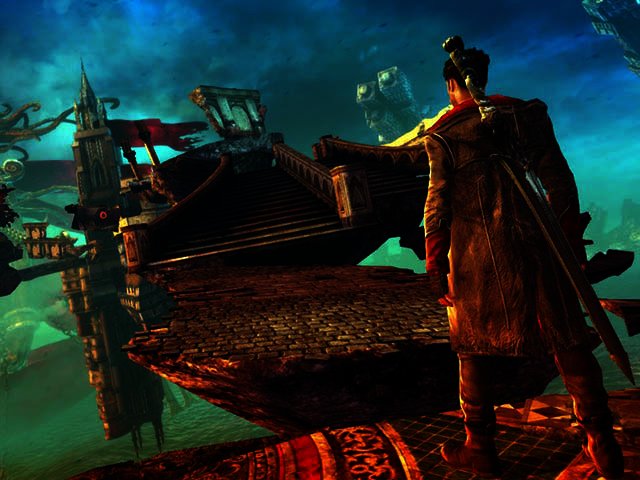 Sadly, Dante grew up in a broken home, and not in the metaphorical sense either.
Awesome arsenal
Nonetheless, if all you want is a game that dishes up some artful opportunities to hack and slash, you will find plenty of that here as well. Dante, who is more than a mere mortal and is capable of inflicting bloodshed on a level that would make Dexter wince, does so, at least to begin with using his guns, Ebony and Ivory, and his sword.
These are quickly complemented as the game progresses with a variety of other weapons, including but not limited to, the Arbiter, a demonic Axe which offers slower, but shield breaking attacks, the Osiris Scythe for handling large groups, and an Ophion Whip to grapple enemies or interact with objects.
A considerable feature of the game though, is how stylishly Dante fights, and this entails using a vast variety of combos and abilities players can purchase, and upgrade, at the start of a mission or at the Divinity Statues dotting the levels.
The real beauty of the combat is how these are used in combination during combat. We have to hand it to Ninja Theory – accessing each of the arsenal is easy, quick, and most importantly, loads of fun. It only becomes more so as one upgrades one’s moves, and is thus able to pull off an increasingly spectacular and devastating range of attacks.
Aerial attacks, for example, quickly became our firm favourite, as enemies can be launched aloft, as Dante quickly follows them and deals unrelenting damage to one feckless demon high above the heads of waiting enemies. Another firm favourite was the Osiris Scythe itself, which brought back fond memories of the fast style in Heavenly Sword. 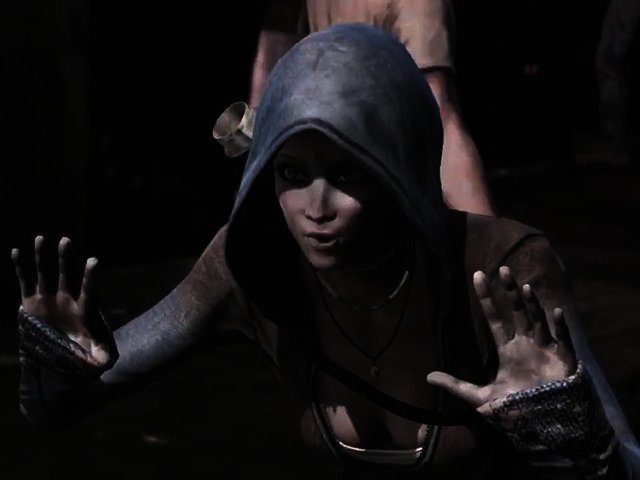 Dante's disposition wasn't improved as he grew when he was told that his singing was tortuous, and that
he could inflict less pain with a sword, axe and two guns.
Much to love
Also in its favour, is the fact that production qualities are top notch, with distinctive graphics, fantastic levels, flawless sound and very fluid and satisfying combat. Equally as important, the story is expertly crafted, which is exactly what we were expecting from Ninja Theory.
The levels themselves are stylish and drip with atmosphere, in some cases reminding us a little of Supernatural.  Appropriately enough, exploring the game in between the frenzy of combat  can be deliciously spooky, something that we love in the TV series and which works no less well here, especially with some good surround sound speakers.
Lost souls and golden doors
There is also plenty of reason to explore off the beaten track, to look in that niche or crevice or to venture in a new direction. Keys – bronze, silver and gold, are tucked away in each level, and these open different doors. Behind these lie the secret missions, about which we won’t spoil the surprise or rewards of making the efforts to find.
Additionally, there are also lost souls to liberate, and finding all these hapless creatures enables one to get a better grading at the end of each mission. Both the secret missions and lost souls also give one reason to replay and revisit the various chapters, and thus add to the game’s longevity.
The remaining question left unanswered: is there anything we didn’t love about the game? Well, the heavy metal music background is not really to our taste; thankfully the game enables one to disable it and play through it without, which we promptly did.
On infrequent occasions we also found the camera to be ever so slightly erratic, but nowhere near enough to damper the overall pleasure that we derived. In essence, what we loved about the game far outweighed any flaws we could find. 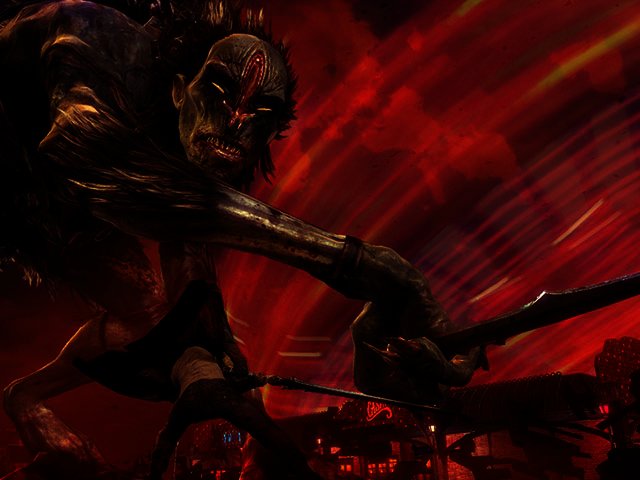 His tragic life continued as a close friend's experimentation with DIY plastic surgery, while under the influence of steroids, didn't work out very well either.
To the point
In short, Ninja Theory has done this franchise proud and added yet enough title to its line up that clearly demonstrates its game development skill.  DMC proves itself to be a game that is as gripping as it is gory, and one that we can unreservedly recommend that action and hack-and-slash fans pick up if they haven’t done so already.
Pros
Fantastic combat
Atmospheric level design
Gripping story
Fun to play
Cons
Infrequent camera missteps
Music score may not be to everyone’s liking