Death brings new life to Darksiders franchise
9.5    Gameplay
9.0    Story
9.3    Presentation
9.0    Lasting appeal
4.5
While the original Darksiders was both criticised, and appreciated, for its tendency to pay homage to some well known gaming styles, such as found in the God of War and Legend of Zelda franchises, on the whole, it worked to produce a game that nonetheless stood on its own two feet and proved a great deal of fun to play.

Darksiders 2 continues in this vein, combining traces of Legend of Zelda type exploration, a Diablo-reminiscent looting system, a more refined God of War-type hack-and slash combat and acrobatics that evoke fond memories of the Prince of Persia series, along with some RPG elements that brought Kingdoms of Amalur to mind.

As it did with Darksiders 1, Vigil Games successfully combines all of the above to create a game that is more than the sum of its parts, while still feeling a bit familiar to fans of the titles it pays homage to.

However, there are still notable differences, many of which greatly expand on the Darksiders universe and give players another way of experiencing the game’s rich and varied world. 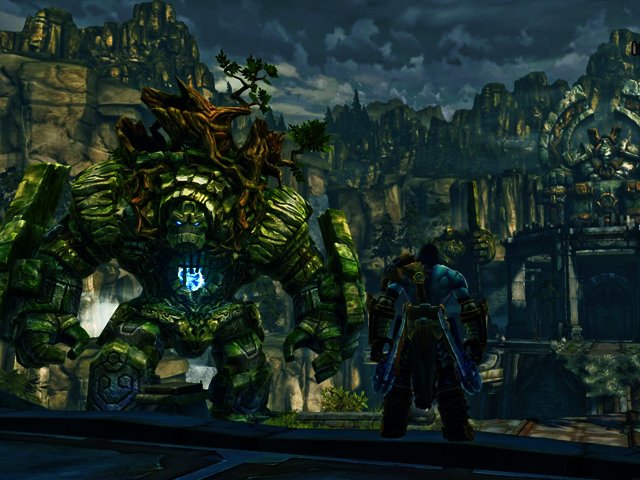 Beautiful spot for a vacation - just don't take up the giant's offer
to arm wrestle for the best room.
Parallel realities

Rather than picking up where Darksiders left off, Darksiders 2 takes place in parallel to the events of the first game. While you needn’t have played its predecessor to enjoy the second title, it certainly neatly fits into and fills in the main story if you have.

Essentially, Darksiders 2 focuses on Death, one of the four Horsemen of the Apocalypse, who tries to prove his brother, War, innocent of prematurely causing the apocalypse and the end of mankind. On the surface, his plan is simple enough: undo the extinction of humankind, thus mitigating the crime of which his brother stands accused.

However, very early on in the game, his plans go a bit astray, and instead, he finds himself stranded in a world with The Makers, ancient giants, who quickly task him with rescuing their dying world on his way to finding the Tree of Life. Without spoiling too many of the surprises, let us just say that those who did play the first title and remember the fiery, red-headed Ulthane (the Black Hammer) will come to understand a bit more of that character’s backstory.

You can parkour here

It is from here that Darksiders 2’s distinguishing factors begin to emerge more fully. Whereas the first title was a tight, action-adventure experience, with distinct separations between its moody dungeons and atmosphere soaked settings, Darksiders 2 is considerably more expansive, and more akin to an open-world more typically found in role playing games such as Kingdoms of Amalur: Reckoning.

As such, some of the environments are beautiful, majestic and on occasion less formidable and sinister than those found in Darksiders 1. Additionally, players can fast travel to previously visited areas via the world map, while their last position in a dungeon is saved for their return. While useful, we far preferred the enchanting Serpent Holes between worlds that were used in the first title.

Even so, within dungeons, one of Death’s main means of getting around include wall running, grabbing hold of conveniently placed handhelds, and flinging himself from one hanging pole to the next. Thankfully, these parkour-like navigation elements are implemented superbly well, and did not become a source of frustration. 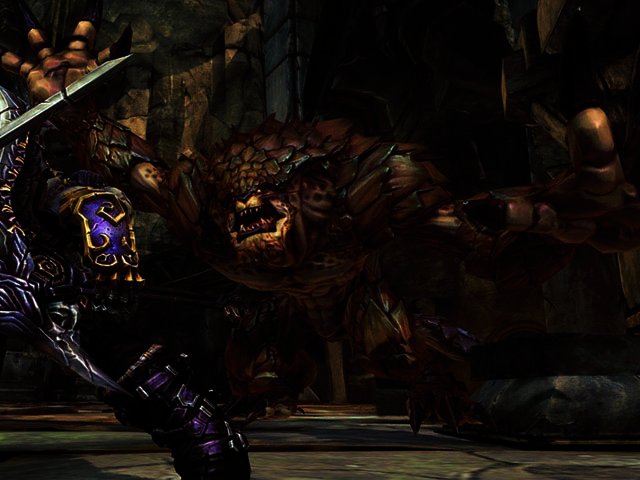 "Don't you give me attitude! I warned you that steroids would be the death of you."

Most apparent is that, when it comes to combat, Death is wholeheartedly different to his brutish brother, War. Whereas his brother was a comparatively slow and heavy brute who could withstand a fair amount of damage, Death is sinewy, lithe, and very fast, and instead relies upon his ability to dodge and roll out of danger’s reach, before dashing in to deliver a lethal flurry of blows. Indeed, this means that combat is much more of a fluid, sometimes frenetic affair, but no less fun or satisfying.

Rather than wielding a single sword as his main weapon and a slower scythe as a secondary, heavy one, Death dual wields two scythes as his fast weapon, niftily complemented by axes, hammers, gauntlets and glaves as the secondary option.

Rushing into to deal with enemies and trading blow for blow as was War’s style, is a very good way to quickly get killed. Instead, a more strategic approach is often called for, particularly when confronting some of the tougher, and bigger enemies, that roam freely through the dungeons and the world. No less worth mentioning are the deftly crafted puzzles with which Death has to contend, and the growing arsenal of tools which he gradually garners.

These include Strife, a handgun imminently useful for causing bombs to explode at a distance, the Deathclaw which serves as a grappling hook, and in a homage to the Voidwalker from the first game, a means of creating portals to cross great distances. 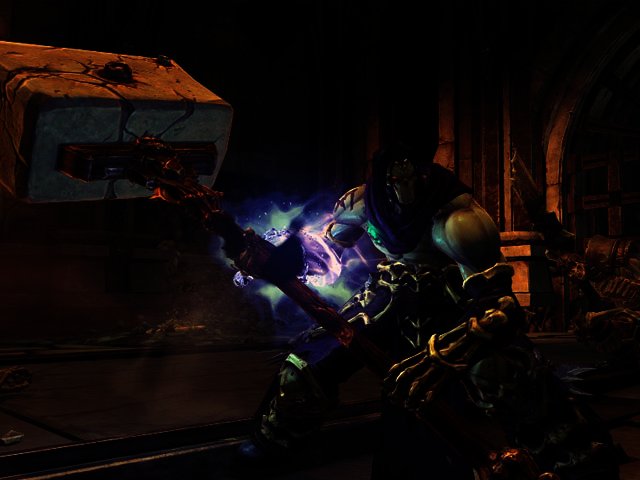 So where's that nail you wanted me to knock in?
Even Death has company
Whereas War could adopt a demonic, very powerful Chaos form for short periods of time, Death is able to similarly unleash his true Reaper form, which similarly can deal significantly more damage while the transfiguration lasts.

Rather than being accompanied by taxes, Death is instead joined by his steed, Despair right from the outset. This answered one of the valid criticisms of the first game, in which War received his steed rather late in his journey.
Although one of our favourite characters from the first title, the creepy demon merchant Vulgrim, does make a welcome return, the menacing Watcher (superbly voiced by Mark Hamill in the first title) has no part here, and instead the illumination of Death’s path is left to Dust, his crow, who turns out to be somewhat erratic and largely ignorable.
Treasure beckons

One of the bigger changes to Darksiders 2 is the implementation of loot elements, which enables Death to find a myriad of weapons and armour dropped by enemies, as well as hidden in chests which are scattered considerably more abundantly throughout the world, and graded by their colour.

The best of these are the Possessed items, which can consume other loot items, and in so doing, become stronger and take on new characteristics.

Wrath abilities have also been greatly expanded on in Darksiders 2, as players can spend skill points on abilities within either Necromancer or Harbinger skill trees. The former enables Death to summon Undead creatures, while the latter focuses more on executing magical attacks. Alternatively, players can sample a bit of each, and create their own fighting style of sorts. Indeed, a large part of the fun and effectiveness in combat centres around combining various attacks to devastating effect.

Even so, there are plenty diabolical puzzles and dungeons to battle one’s way through, rather distinctive bosses to handle and defeat, and numerous hidden items to find in the form of Boatman’s coins and pages of the Book of the Dead, which can then be used to earn currency and trade Vulgrim for new moves or new items. All of this takes place in a far vaster world, that isn’t limited to a ravaged Earth. 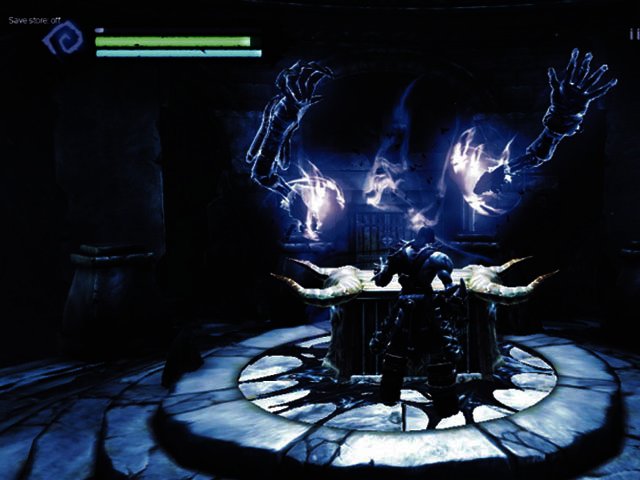 The good news is - you're getting a bonus. The bad news is you're going to have to
battle through hordes of monsters to find it - like this guy.
To the point
While the gameplay is solid (at least on our PS3 version) and the environments often stunning, the game’s quality is only enhanced by some excellent voice acting. Michael Wincott deftly voices Death, and brings a rather paradoxical character to life, who seems to care little for the fate of others while risking all for the fate of his brother.

A myriad of other characters are no less well voiced, adding gravitas and depth to the unfolding story, while a superlative score effectively immerses players in this otherworldly, often enchanting, title (so much so that it had us quickly heading to iTunes to purchase it in its entirety).

The acrobatic exploration, fluid and fast combat, more cerebral puzzle solving and anticipation of finding yet more valuable loot around the next corner keep the game constantly in motion, never boring or overly repetitive and ultimately very easy to get lost in.

It is somewhat ironic that it is Death that breathes new life into the Darksiders franchise, as the sequel offers a grand, breathtaking adventure that we had to tear ourselves away from. Long after the day had died and surrendered to nightfall, ultimately it was Death that tempted us for just a little more adventuring. Suffice to say, we answered, and are still answering, that call. Darksiders 2, therefore, comes highly recommended. It has an RRP of R515.