Sony gets the jump on Microsoft’s Kinect and puts in a sporting challenge to the Nintendo Wii’s motion-based gaming dominance with its PlayStation Move add-on for the PlayStation 3 (PS3). It’s been a long wait, but at long last PS3 gamers around the world can get off the couch for some motion-based fun. TechSmart put the offering through its paces.
Moving the game control goal posts
Unlike Microsoft's Kinect, Sony has chosen to follow a more traditional route by utilising a control based setup similar to that found in the Wii for its motion control offering.
The PlayStation Move add-on comprises of the PlayStation Eye camera and the PlayStation Move motion controller, which works along the same lines as the Wiimote and Wii Sensor Bar of the Nintendo Wii.
It’s a well designed controller that is lightweight as well as easy and intuitive to play with. Sony’s traditional buttons (X, O, ?, ?) still feature on the controller, performing the same roles (for example pressing O in the menu system lets you go back one step), as does the select, start and PS-button (taking you to the main PS menu).
Right in between those trademark buttons sits the larger Move-button, which is the primary button on the controller, used to perform the majority of the select and continue menu options. You’ll also find a T-button (trigger button) at the front of the controller which works the same way as a gun trigger.
All the buttons are easy to use and well placed, apart from the select and start button (on the sides of the controller), which are a bit more difficult to manage.
A coloured sphere at the top allows the Eye camera to accurately pinpoint your position as well as movement within a room, with this tracking then translated into gameplay.
Overall the controller is well designed and performs admirably. We found it to be very accurate virtually emulating your real life movements on-screen while not showing any visible signs of lag. 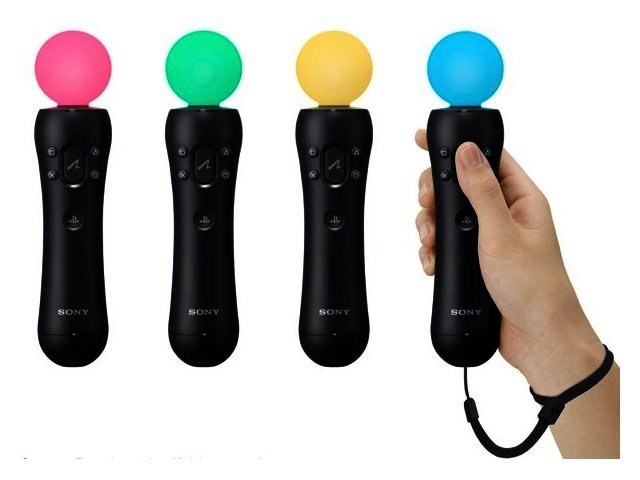 Setup
The entire setup of the PS Move system is quite simple as all you have to do is plug in the eye camera into an open USB slot at the front of the PS3, turn the Eye camera’s dial to blue and off you go. If you’re only using the PS Move controller it will get picked up immediately. Used in conjunction with the PS3 dual shock controller it will get assigned a controller number straight away as well.
As is the case though with Sony’s standard dual-shock PS3 controller, the PS Move controller unfortunately only charges when it is plugged into a PS3 that is switched on. The controller’s connection cable is also so short you can’t really charge the controller while playing a game, as it inhibits your movements too much.
Included in the box
Sony’s PS Move Starter Disc contains no less than nine game demos (such as EyePet Move Edition and the flagship PS Move title Sports Champions), but you have to install them to your PS3’s HDD though (installation size ranges from 350 MB to 3.4 GB) and can’t play them straight off the disk.
These demos not only allow you to experience your new gaming hardware in action right from the get go, but also enables you to experience some PS Move titles before deciding to invest in them.
This however is where Nintendo has the upper hand as the Wii comes boxed with two very popular games, Wii Sports and its sequel Wii Sports Resort.
Conclusion
PlayStation Move heralds a new era in PS3 gaming, enabling it to compete head on against the Nintendo Wii in the motion-based gaming department  while also giving the Sony the jump in challenging Microsoft’s upcoming Kinect system.
The Move is an easy system to set up and very intuitive to use. It allows you to move easily through the PS3’s menu system and emulate real life actions in the virtual games. It’s just a little annoying that you have to leave the console switched on in order for the controller to charge.
At R699 for the Move Bundle (PS Move controller, PS Eye camera and PS Move Starter Disc), it also costs significantly less than Kinect (R1 999 for the standalone Kinect sensor bundled with “Kinect Adventures”). An extra move motion controller can be had for R449, whilst the cost of the secondary navigation controller comes in at R349. The Move will be available as of Friday 17 September 2010.

PROS
Lightweight controller, easy and intuitive to use, affordable system, adds to the capabilities of the PS3.

CONS
The controller doesn't charge when the PS3 is switched off and the bundle disc only includes game demos.
TAGS:
SonyPlayStation 3computer and videogamesPlayStation Movemotion-based gaming
USER COMMENTS