Ratchet and Clank All 4 One

A visual feast of a game that we couldn't get enough of.
8.5    Gameplay
8.0    Story
8.5    Presentation
8.0    Lasting appeal
4
When we first heard that Insomniac Games’ latest Ratchet and Clank: All 4 One title would depart from its former single player focus and instead have co-operative play, we were admittedly concerned. We wondered whether the developers would try to fix what wasn’t broken and in the process eliminate what had made the series so endearing and enjoyable.

Thankfully, we needn’t have worried, as happily, the answer is a resounding no. All 4 One is different to its predecessors, that’s true, but no less fun, and in some ways, even more so. The same cleverly written humour is abundant, as is the variety of deliciously oddball weapons and spectacularly sumptuous environments.

The character models have changed a bit, reflecting a slightly more cartoonish look, and the camera has been pulled back somewhat to accommodate co-operative play. This doesn’t always play to the game’s favour though, since in certain segments it’s a little too easy to lose track of your character amidst the levels and the firefights, plus it’s a bit restrictive in terms of exploration.

Additionally, the pulled back camera means combat isn’t quite as engaging as it has been in the past; nonetheless the game is still addictive and immensely fun to play. 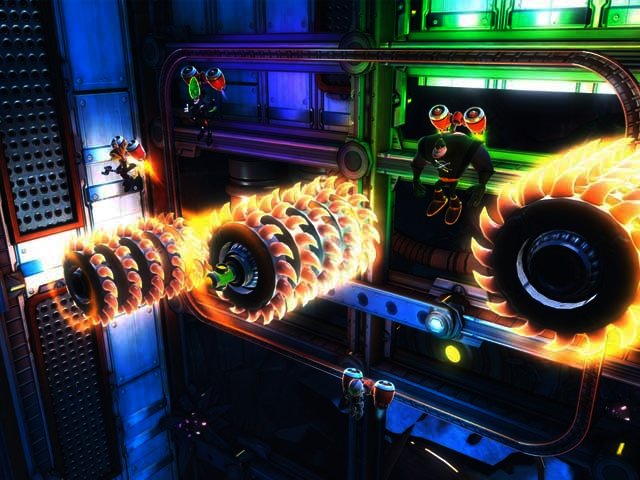 There are some immensely satisfying platforming elements that we loved.
Storytime

Through a rather bizarre twist of fate the buffoon Captain Qwark is made Galactic president, and goes to accept the ‘Galactic Tool of Justice’ award (yes, the double entendres continue) with Ratchet and Clank in tow. Unbeknown to them, it is a ruse by their nemesis, Dr Nefarious, to exact vengeance after the events of A Crack in Time, at the end of which Nefarious was presumed dead.

His plans are interrupted by a new menace called the Creature Collector which deposits the foursome on another planet, which has become a home for some of the most dangerous creatures across the galaxy. This forces them to work together (often accompanied by some genuinely amusing banter and laugh out loud moments) to survive and unravel the mystery behind their capture.

Even when you’re single, you’re hitched

This sets the stage for the four player co-op, in which up to four players can assume Ratchet, Clank, Qwark and Nefarious to traverse this beautifully varied world.

However, the game can also be played completely on one’s own, with an AI buddy (namely Clank). Our initial play-through, to test whether All 4 One had stayed true to its single player roots, was a seamlessly successful one.
The AI was so smart and responsive that we forgot after a while that Clank was not being controlled by a human being, as he fought alongside us, quickly helped us activate machines or open doors that required more than one player, and seemed to know exactly what needed to be done on his end to progress further. 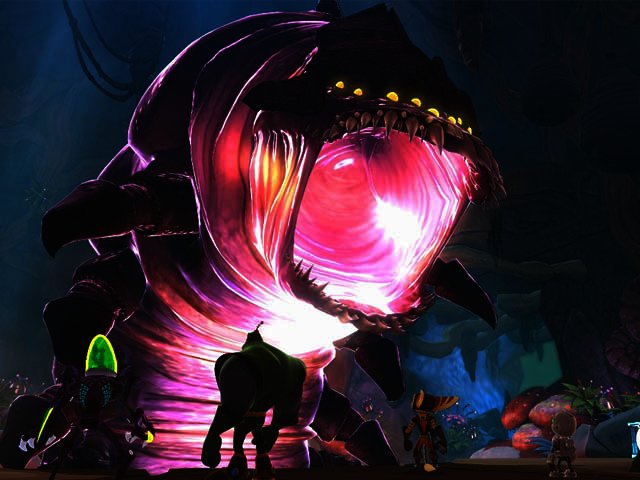 The adversaries are pretty impressive - and massive.
Co-operative Chaos

However, the game has really been designed to be enjoyed co-operatively. We found that two player offline co-operative player was ideal, encouraging competition between you and another player for bolts while still being a bit more manageable.

While four player co-op was a great deal of fun, it does present some of the game’s drawbacks, namely that the pace of the game becomes more frantic and there is less time to explore the rich and varied environments.
Additionally, it can become a bit difficult to keep track of the character you are playing, amid the firefights, bosses and actions of your teammates.

Thankfully we did not have any problem finding and joining an online co-op game. Additionally, you can select from the outset which character you want to play, and which area or stage of the game you want to join. At the end of certain segments, each player is awarded points for the most bolts collected, most critters captured, and most co-operative moves performed. 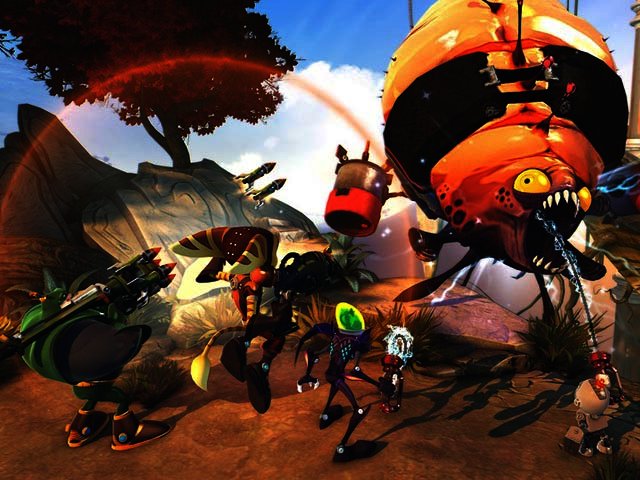 Combat though doesn't always feel as engaging as when the camera offered a tighter
over the shoulder view.
Nuts and bolts

As has been the series staple, crates litter the world, waiting, no, begging, to be smashed. Doing so gives you ever so useful bolts with which to buy new weapons or upgrade existing ones, along with the elusive Golden Bolts to find and collect. (If only smashing crates was as viable a way to earn money in our world, it would make buying even that ever so tempting EOS 1D X within reach).

The weapons come fast and are as always a joy to use. Speaking of weapons, you have a quickly expanding arsenal in All 4 One. These are mapped to the now familiar weapon wheel, which is smaller and has a slightly different control scheme this time around, but is still a pleasure to use, as soon as we got used to no longer using the right analogue stick to control the camera.

Some weapons are reminiscent of old favourites, while others are new additions, which we won’t spoil by writing too much about here, as discovering the next great gun is a constant motivation in this game, as it has been in previous entries.

You start off with the combuster and plasma-bomb launcher, which expands to include the pyro blaster, doppelbanger (a deployable decoy), Mr Zurkon (the slightly psychopathic and hilarious bodyguard making a welcome return), the warmonger (similar to the previous peacemaker), arc lasher (similar to the lightning whip), and the blitzer (melee gloves) to name a few.

The main addition to the combat is that, if the same weapon is used by more than one player, its impact is increased. It’s a neat way to encourage players to work together to defeat enemies, and somewhat balances out the ever competitive quest to scoop up all the bolts.

There are also gadgets that each have their role. Most notable amongst these is the Vac-U, which plays a pivotal role in navigating the game world. You can use it to launch your buddy (AI or otherwise) across spaces and then use the arc tether to reach him. The Vac-U serves another purpose as well, namely to collect critters populating the world. Doing so unlocks creature labs, with some very nifty puzzles. 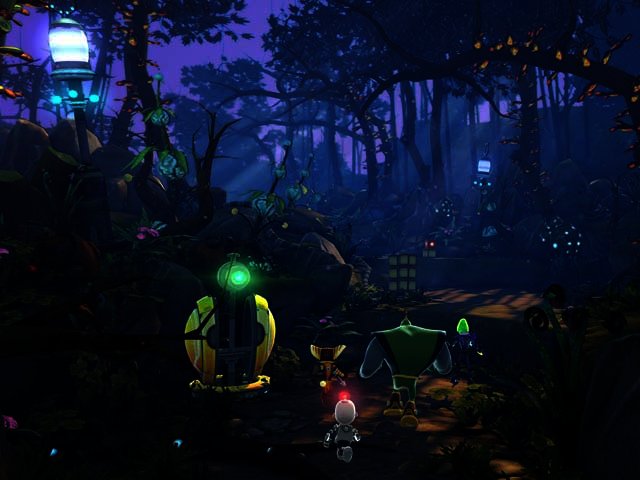 The game's varied  environments were a joy to feast our eyes on.
To the point

We have to hand it to Insomniac Games, each entry in the series has been unique and had its own personality of sorts, and All 4 One certainly has plenty of individuality and quirkiness, which kept us coming back for more time and again.

It is one of the reasons why Ratchet and Clank has remained amongst our favourite series for so long, and All 4 One has won us over to the franchise all over again. Our advice: don’t miss it.