Rayman: Legends burst onto the scene with a bit of a chequered history. Originally slated for release as a Wii U exclusive in February of this year (and arguably one of the more compelling reasons to buy the Wii U leading up to its release), to the dismay of fans, the game was subsequently delayed six months. Then, Ubisoft announced it would no longer be an exclusive, but instead would leap its way to multiple platforms besides Nintendo’s, including on the PS3 (reviewed here), Xbox 360, and the PS Vita.

The good news is that the move, and the wait, has been well worth it. As the all-too-brief PS3 demo suggested and teased, Rayman: Legends offers an insane amount of frenetic platforming fun.

To start with, for those who don’t already know or haven’t played Rayman Origins, this is a 2D scrolling adventure, but we strongly recommend you don’t allow that to put you off though, as doing so would be doing yourself a grave disservice. This is quite easily one of the best 2D scrolling platformers we’ve played to date, with no offense to Mario or the likes of Limbo or Trine.

Let’s start by giving you a brief taste, from quite possibly the most joyous game launch trailer in history.

Legends’ story is easy enough to jump into, as it finds our titular hero and his companions taking a very long and overly extended nap, courtesy of a sleeping spell. In the meantime, all sorts of darkness escapes into the Glade of Dreams, necessitating Rayman to be woken from his slumber to deal with the monsters that are polluting the land, as well as rescue the magical, secret-keeping Teensies.

This though, really just sets the stage for an array of worlds, accessed through paintings, which are refreshingly as distinctive as one could hope for. For example, Teensies in Trouble (the starting world) gives way to Toad Story, along with 20 000 Lumes Under the Sea and then Olympus Maximus.

Within each world, there are a number of levels ingeniously designed, with Teensies to rescue, Lums to find (necessary, in order to progress and unlock further worlds and levels), and of course, some unique enemies to deal with.

Music to our ears

As befitting a good Rayman game, around just about every corner there is something waiting to eat you, crush you, impale you, club you, squash you, and otherwise express its sincere displeasure with your existence. However, the game also has its quiet moments, which are only the more surprising given the frequent frenetic pace.

While the game’s graphics are magnificent, music is also a large part of the game’s appeal. Indeed, part of the genius to be found here is that within each world there is a musical themed level. Make every jump, and avoid being killed, and you end up causing a song to play, triumphantly and in harmony. Miss the mark though, and the music is interrupted, and Rayman’s life comes to an end.

However, even when we did fail a level and die, we didn’t find this to add to our frustration as much as it caused us to want to try again, if only to see what the game could possibly dish up after successful completion.

Rather than spoiling the many surprises that wait though, we will say this: Rayman: Legends is an artistic tour-de-force offering up beautiful, extensively varied levels and an array of ideas that keep the game fresh and surprising, and most importantly, an absolute delight and blast to play. 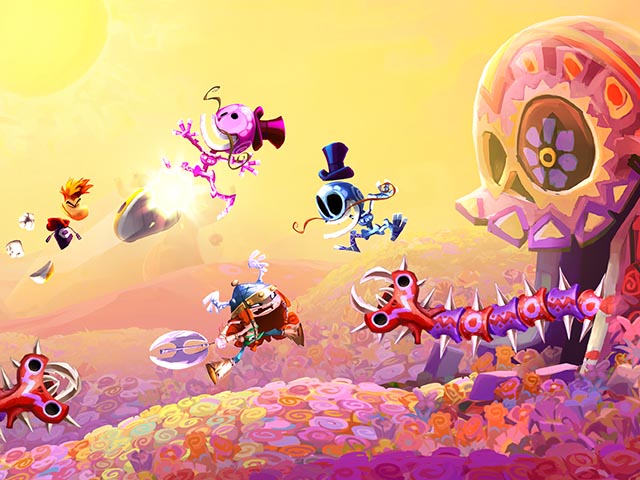 "I warned you that particular popsicle has a nasty habit of trying to lick you back."

Taking it to the next level

It is really the level design that shines here, and that lifts Rayman: Legends to the top of the class. While in each you essentially, run, glide, punch, and jump your way from one end to the other, it is what happens inbetween that makes the game, and its levels, such a delight to play, and yes, replay.

Additionally, in some levels you can – and need to - call on Murfy, a sprite like creature who helps you progress through the levels. Much like the game, Murfy is no one-trick pony; rather he can access levers to lower or raise platforms, tickle enemies to distract them, cut ropes – often squishing some enemy directly beneath it – or poke an eyeball to turn it into a steam vent or jump pad.

If that is all that Rayman: Legends had to offer, it would have been plenty. However, it’s not – there is quite a bit more. Successfully garnering enough Lums in a level also gives you a Lucky ticket, which can then be used to unlock an Origins painting. Here, you can find selected levels from Rayman: Origins to play through. However, while we still love Origins, Legends’ level design is head and shoulders above that game, and its levels certainly do show how far Ubisoft has come in the interim period between the two titles.

Also on offer is Kung Foot, best played cooperatively, which is a Rayman take on soccer, and as madcap as you may suspect. 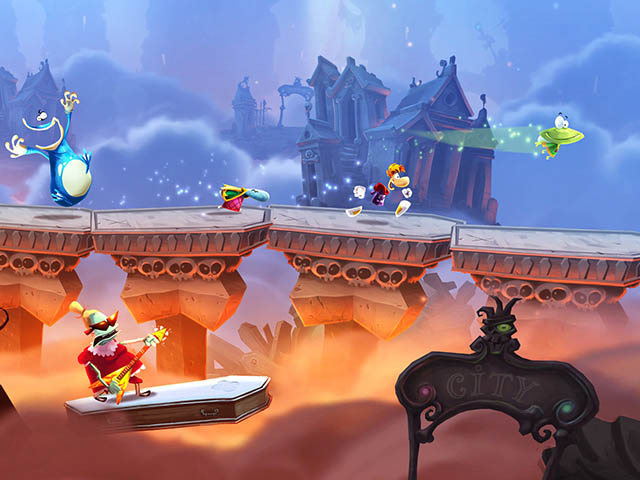 "Everyone hurry, before he starts auditioning for Idols."

However, the ingenious level design, fantastic audio, beautiful artwork and exquisite platform are not the main reasons why we would recommend picking up Rayman: Legends post haste. No, to our minds, that honour belongs to the fact that the game manages to evoke joy at an outrageously high level of creativity that has clearly been let loose and allowed to run wild. What's more, Rayman: Legends in its whimsical way offers some sheer fun, that only the best of games manage to attain. Play it. It has a RRP of R500.

CONS
Wondering whether you are missing out playing it on any of the other platforms
TAGS:
Rayman: LegendsUbisoftplatformsside scrolling games
USER COMMENTS