It will cast a spell on you
8.5    Gameplay
8.2    Story
8.0    Presentation
7.5    Lasting appeal
4
After what has seemed like eons of waiting since its trailer debut, Sorcery finally conjured up an appearance on the PlayStation Move, and quickly proves itself to be the most enchanting reasons we have had to reacquaint ourselves with the PS3’s motion control peripherals in a while.

The game starts off innocuously enough, with you stepping into the scrappy frame of Finn, an impetuous teenaged sorcerer’s apprentice whose eagerness towards the art of sorcery far outweighs his mastery. Left to scrub pots as punishment for using a wand without permission, Finn instead ‘borrows’ the wand, while his master, Dash, is away, and begins to land himself in a far greater trouble.

Grave danger spells great fun
Urged on by Erline, his master’s cat, the game’s setting quickly changes from serene to eerie, as Finn ventures into tombs, encounters a banshee and puts himself, Erline (who is not what she seems) and the world in danger from the nightmare queen.
As the story, and Finn and Erline’s journey through the faerie realm progresses, so does Finn and Erline’s characters, most particularly as the gravity of their situation causes Finn to mature and move beyond his initial flippancy and over confidence.
Additionally, the story offers up a couple of genuinely poignant moments a little later into the game, as the nightmare queen’s evil impact becomes tragically apparent. 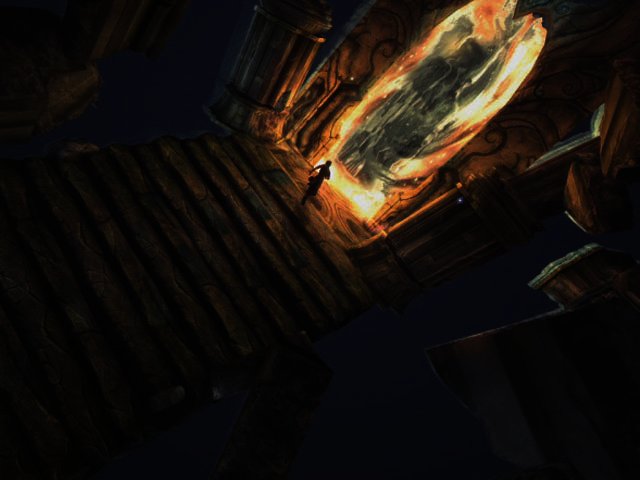 The way forward is stairing you in the face.
Of hexes and highlights
While the graphics are as one would expect from a PS3 title (very good), with different regions faithfully rendering an otherworldly impression, it is the aural accompaniment that particularly shines and draws one in. This is only enhanced by some excellent voice work, with Finn and Erline’s characters providing some humorous moments thanks to the amusing banter between the two.
Additionally, the accompanying music – which was distinctively Irish and a little reminiscent of Lord of the Dance – was a pleasure to listen to, as it appropriately shifted from being lively and even playful, to hinting at danger ahead of fierce battles, to occasionally becoming more solemn and even haunting.
Our one criticism was that some of the character models of the stock Bogey enemies became somewhat indistinguishable from one another. They, however, were the cannon fodder of the game; and the trolls, sylphs and banshees were less similar. Given the richness of the environments and the mystique of the setting, we still would have liked to have seen greater diversity of foes.
I’ll put a spell on you...
However, a good part of the game’s fun lay in casting spells and learning new ones. These grow fairly quickly, from the initial workhorse arcane bolt, to earth strikes, ice bolt, a whirlwind spell which conjured powerful gusts of wind and tornadoes, and which was also used to solve a few puzzles, and the heavy duty damage dealing fire blast and lightning bolt.
However, spells really become interesting when combined with the elements and with each other. For example, fire turns your humble arcane bolt into a more powerful fire bolt, useful not only for dealing with tougher opponents but also for clearing obstacles in your path.
A little further into the game, players could conjure a tornado and direct arcane bolts into it, or propel it through a fire pit, to create a fire storm, which would deal great and chaotic damage to swarms of enemies. Alternatively, players could freeze tougher enemies in blocks of ice, which could then be shattered with a single strike.
Making matters more complex was the fact that some enemies were aligned to a particular element, and therefore immune to a spell that had the same element at its heart. For example, the normally heavy duty fire strike had little impact on fire sylphs, while ice sylphs were likewise immune to ice freeze. Therefore, knowing which spell, or combination thereof, to use against foes became imperative. 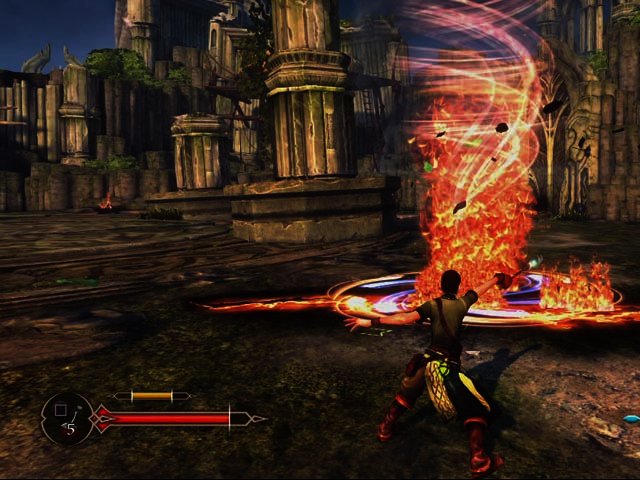 In Faerie realm, this is how Bogies get fired. 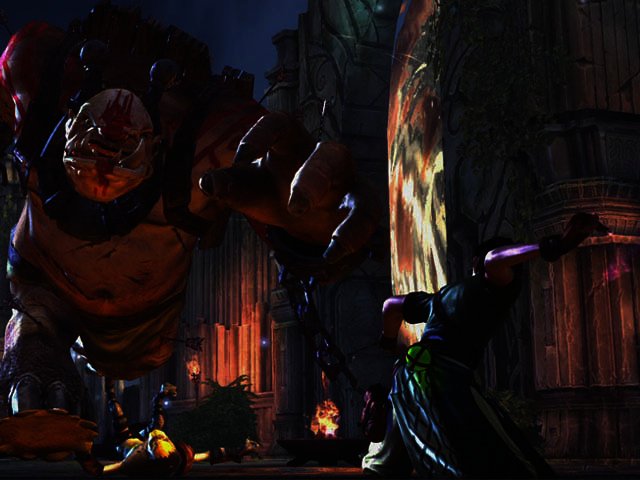 And you thought internet trolls could get ugly....
Moving in the right direction
Given that so much emphasis is placed on spellcasting, it was gratifying to note that for the most part, the Move controller worked like a charm. We had little problem directing our spells; a simple flick forwards would send them straight to the target.
Adding a curving motion to our wrist caused our arcane bolts to curve and pick off foes hiding behind cover, or access additional spell qualities, such as drawing a line of fire when used with the fire blast spell.
Another very well implemented part of the game was the alchemy. Numerous potions could be created by mixing some colourfully named ingredients (such as troll sweat, brimstone, gravedust or Faerie honey, for example) in a variety of combinations. Most times these would produce some very useful potions, such as increasing Finn’s health, helping him regenerate mana faster, or bolstering the strength of his spells or resilience to attacks.
A few results were more humorous (ie transforming one into a ‘delicious pie ingredient’ or transforming one into a rare and valuable pig). Ingredients, all too precious potion bottles, and treasures with which to barter with a travelling salesman, were found within treasure chests scattered and hidden along the way, encouraging players to explore the environments to their fullest.
Through it all though, we were left wondering why, oh why, couldn’t a Harry Potter game implement the spellcasting and alchemy elements with the same aplomb as Sorcery has? 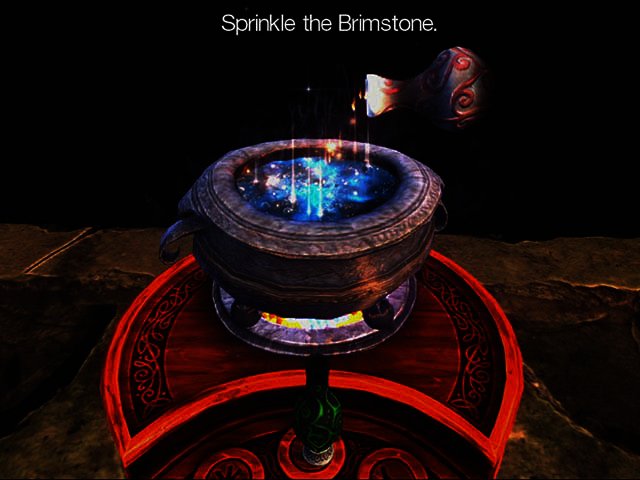 Now remember, this is strictly for medicinal purposes...
Wishes and weaknesses
Admittedly, the camera did on occasion seem to struggle to orientate itself to Finn’s gaze, which is imperative to directing the path of his spells.
However, this tended to occur exclusively in particularly close quarters, and became more avoidable as we followed the game’s predominantly linear path. For the most part though, the camera behaved itself, and we certainly did not feel like we were battling against it.
Additionally, Finn gains access to a Polymorph potion at certain points, which enables him to transform into nearby animals. While we were able to play as a rat in these sections, unfortunately this did not extend to controlling the flight of a bird in later segments. It's a pity that this aspect of the game was not fleshed out more, as it offered an intriguing change of pace.
We also would have liked to have been able to explore the world more freely, and considering the fun that we did have with the title, a longer adventure would have been most welcome, as would have been an option to start a new game+ once we completed the game.
As it was, it took us between seven and eight hours to complete; however, we were left feeling that it was time well, and enjoyably, spent.

Most importantly, Sorcery is a great deal of fun to play, and is easily the best thing that has happened to the Move to date. If you own the controller, and enjoy whimsical, magical adventures, this is the title to pick up. In fact, if we had to sum up the game in three words it would be: Sorcery 2, please.
Pros
Excellent implementation of Move controls
Enticing world
Well done spellcasting and alchemy
Superb aural accompaniment
Charming story and character development
Cons
Occasional camera issues
Bogey enemies a bit too similar
Limited use of the polymorph potion