We were recently fortunate enough to get our hands on the new Alienware M17X, the most powerful model of the current range and a laptop which Alienware totes as “the most powerful 17” gaming laptop in the universe.”
Looks to die for
One of the first things that strikes you when looking at this laptop is its amazing aggressive design philosophy. The M17X sports Alienware's 'industrial design' concept, making it appear as mean on the outside as it's powerful on the inside.
The laptop's visual presence is further enhanced by large slanted and illuminated vents on front of the device and Alienware's signature custom lighting options. Through the Alienware Command Centre, users can access the FX editor to customise the lighting options as much as they want, with a whopping 150 000 different combinations available.
The lighting options may sound like a bit of gimmick at first glance, but they're actually a very nifty addition to the laptop. If you want a red mean looking alienware, so be it, if you want a multi-coloured rainbow layout, so be it - the customisation options really adds to the device's premium look and feel.
Ambitious design concepts such as this have a possibility of failing if they don't catch the fancy of the user base, but Alienware have done such a great job in the styling department that the M17X won't be alienating any users based on style any time soon. 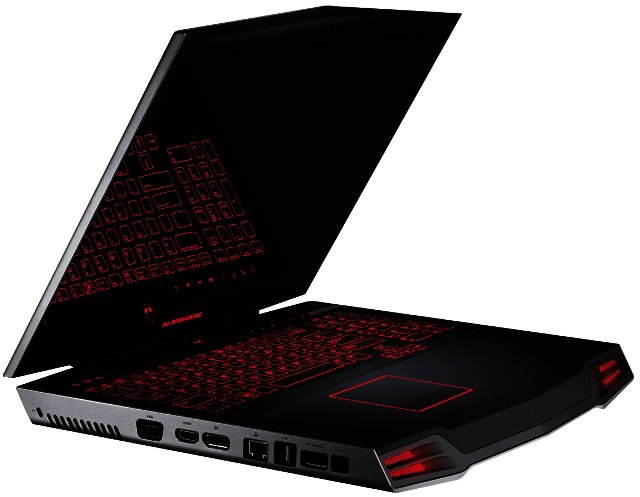 Ports and usability
The M17X sports a very well laid out design, with the keyboard accommodating fingers very well. All the keys have a slightly rounded design and features slight spaces in between them to ensure you don't press multiple keys at the same time by mistake. The keyboard also contains a full numpad on the right hand side for some quick number crunching as well as touch sensitive media keys located to the right above the numpad.
The multi-touch enabled touchpad was a joy to use as its sensitivity rivals the best laptop touchpads we've come across. It was highly responsive and very smooth throughout and features a non-stick design to ensure those sweaty fingers doesn't impede use.
The Alienware also packs a punch as far as its arsenal of ports are concerned. On the left you'll find an HDMI port, DisplayPort and VGA out enabling users to connect the M17X to the mothership via high definition or older analogue connections.
Also making an appearance are five USB ports, one doubling as an eSATA port helping with light speed data transfer. A 4-pin mini-FireWire and Gigabit Ethernet ports are also present as is an 8-in-1 multi-card reader and ExpressCard slot.
One of the only downsides of the M17X is its weight. Thanks to its monstrous performance it's quite the heavy set Alien, weighing in at 5.6 kg, making it not the most carry friendly laptop available. But with such excellent build quality, this sturdy laptop shouldn't provide users with much hassles aside from this. 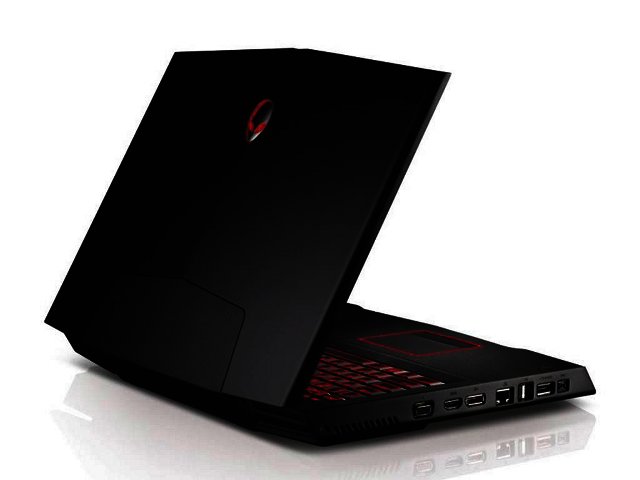 Locked and loaded
While the M17X is definitely far ahead of the competition in the aesthetics department, it's the machine's internal armaments that really allows it to stand out from the crowd.
Our test unit was equipped with the powerful Intel Core i7 Q720 CPU running at 1.6 GHz alongside a whopping 8 GB of DDR3 RAM and an insane two ATI HD 4870 GPU's running in a CrossFireX configuration. This enables the M17X to give users desktop level gaming performance wrapped in a stylish, robust and compact package.
Another aspect of the M17X which really impressed us was the display quality. The device features a 17” wide-screen WUXGA display with a native resolution of 1920x1200. The dual CCFL back-lit LCD display sports a high level of brightness and clarity and the display is perfectly viewable from almost any angle.
As far as optical drive power is concerned the M17X has a tri-format DVD drive capable of burning dual-layer discs. Unfortunately no Blu-ray support is present.
During benchmarking the M17X's alien technology allowed it to blast its way in and demolish all of our previous laptop benchmark record holders such as the Acer Aspire 7740G and Asus G51J. For benchmarking purposes we used 3D Mark 06 on which the M17X scored an impressive total score of 10874. The device went on to score 4278 in SM 2.0, 5069 in HDR/SM 3.0 and 3124 in CPU score. Now, although powerful desktops would still be able to beat this without too much trouble, this is a very good score for a notebook, straight up rivalling its fatter desktop brethren. 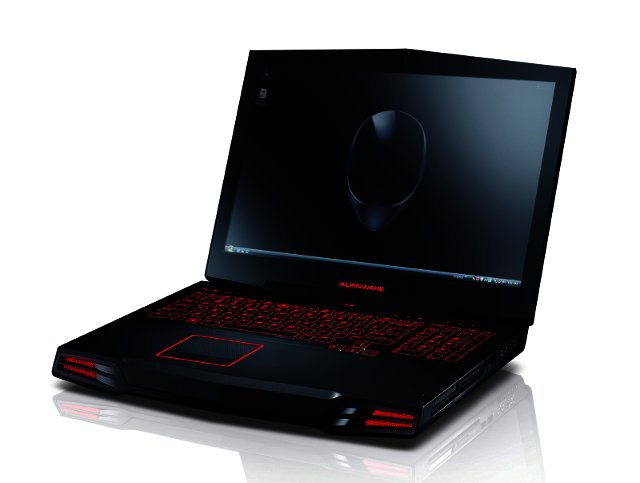 Conclusion
The Alienware M17X is without a doubt one of the best laptops we've ever had the fortune of testing. The device is powerful, looks absolutely divine, sports a wide variety of customisation options and comfortable and easy to use notebook. If we lived in a perfect world the entire office would be outfitted with these babies. But unfortunately the hefty price tag is what's going to cause the M17X, and the rest of the Alienware brand, to appear on the desks of those with only the fattest of wallets.
If you have the cash and the justification, this truly magnificent specimen retails for a recommended R32 999 and is available from Incredible Connection.

PROS
Superior performance alongside a custom Alienware design and oodles of customisation software ensures the M17X's place in the annals of laptop history.

CONS
The M17X makes for quite the hefty load due to the insane amount of features crammed into the device. A very minor issue though, the real con here is the device's price tag.
TAGS:
AlienwareM17Xgaming laptopDellAcerAsus
USER COMMENTS