When HP unveiled the Spectre 13 last year, we billed it as a possible MacBook killer, boasting the title of being the world’s thinnest 13” notebook in the process. At 10.44 mm thin, it has since lost its title to the Acer Swift 7 (9.98 mm), but still features a number of notable specs to grab one’s attention.

So how does the Pro edition of the Spectre 13 fare as a Windows-powered alternative to the MacBook? 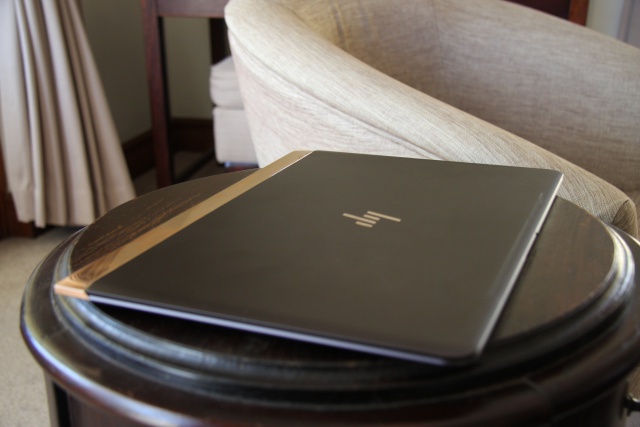 Let’s start with design, which could also be one of the more divisive elements of the entire notebook. In particular, it’s the rose gold (only colour) coloured portion of the notebook that proves to divide people’s opinions. It isn’t for everyone, and can at times seem a little cheap compared to the rest of the device, especially when it begins to pick up smudges and fingerprints.

The rest of the Spectre Pro 13 looks great though. Not only is it well put together, but it has the premium quality that one would expect of a R30 000 notebook. The keyboard and trackpad are well laid out, offering enough real estate to work with either element efficiently. Added to this is a series of laser etched triangles on either side of keyboard, allowing the Bang & Olufsen speakers to deliver well rounded sound quality.

While the Spectre 13’s thinness is what HP chose to talk up following its unveiling, the weight of the notebook is what truly stands out for us. It tips the scales at a lightweight 1.1 kg and it’s an absolute dream for anyone not wanting to get bogged down by a clunky and and heavy notebook. Furthermore, it is reassuringly sturdy too, so you never feel like you’re carrying around a fragile piece of technology. 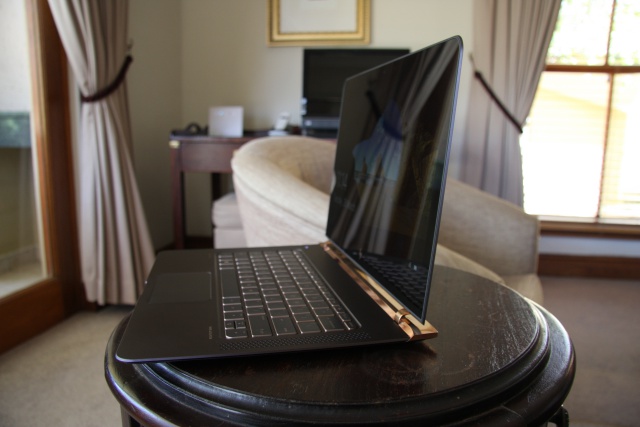 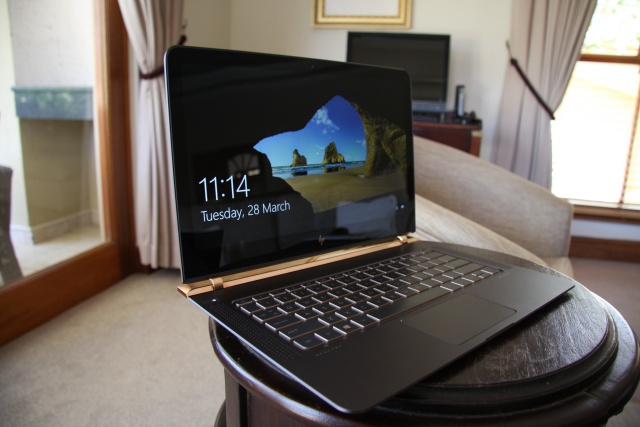 The rose gold accents of the Spectre Pro may not be to my personal liking, but when it comes to the performance of this notebook, there is plenty to be pleased with. Powering this Pro (review) model is an Intel Core i5 (6200U) processor, which clocks at a speedy 2.3 GHz, along with 4 GB of RAM to aid with multitasking. It’s a solid combination, yielding an equally solid performance from the Spectre Pro 13.

Working in and switching between a number of applications is handled with relative ease, and for those aiming to use this notebook both in and out of the office, it is more than capable.

All that productivity does have an effect on the 38 Wh Lithium-ion battery powering this notebook though. During heavy use for example, we could only just make it a full day, roughly eight hours. While that’s good enough for your run of the mill nine to five use, if you’re aiming to put the Spectre Pro 13 to work thereafter, a trip to the charging station will be necessary.

With mixed to medium use though, the Spectre Pro 13 should stand you in good stead for a full day and then some. 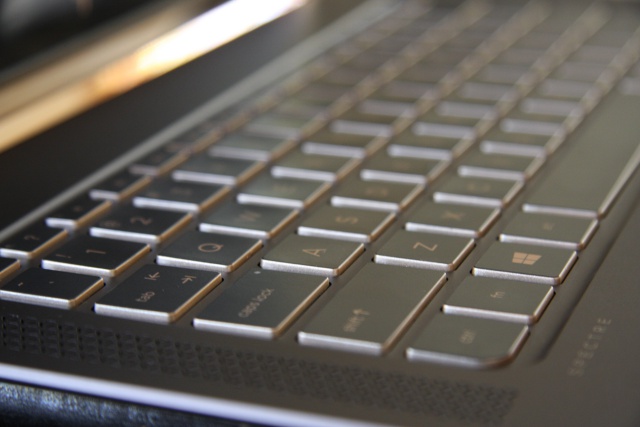 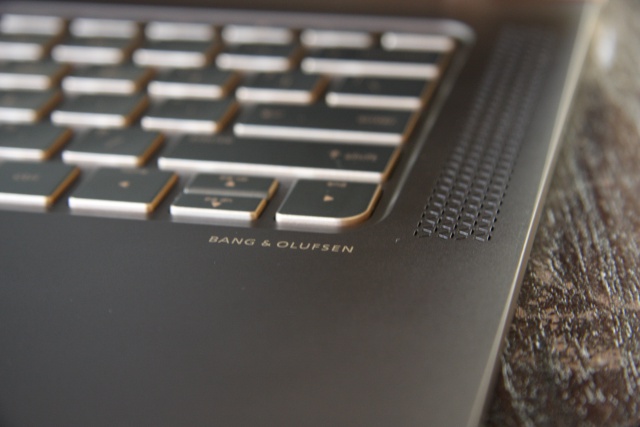 While the Spectre Pro 13 is a good all round, high powered notebook, there are still a couple points of concern. Purchasing one of these devices will require a bit of compromise, especially when it comes to the port options at one’s disposal. On the back of the rose gold portion of the Spectre Pro 13, there are a handful of ports, with a 3.5 mm headphone jack, and three USB Type-C slots.

The latter is what will likely cause a few issues, particularly if you don’t own other devices that feature the same port. As such, the dongle life may be a possibility if you opt for the Spectre Pro 13, which is a problem that many owners of the new MacBook Pro (Touch Bar) have encountered. 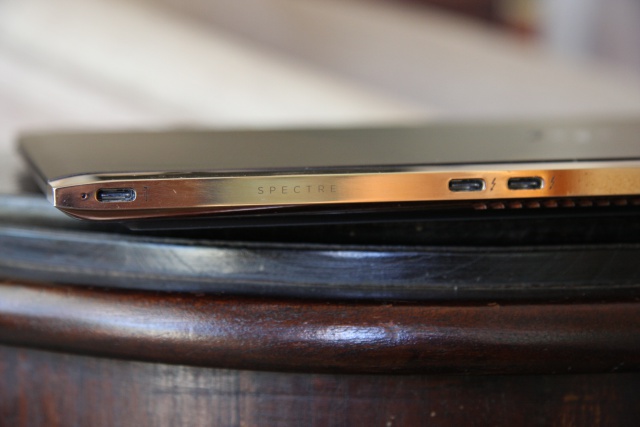 Can the HP Spectre Pro 13 go toe to toe with one of the high-powered MacBook Pros? Yes and no, with certain elements truly shining and others flattering to deceive. The design for one, is either something you’re immediately attracted to or slightly turned off by. Options like the Acer Swift 7 (R25 000) or Asus ZenBook 3 (R25 000) may be easier to live with from a design perspective.

Looking past the design though, and focusing on the performance and everyday use, the Spectre Pro 13 is great all-rounder. Both the keyboard and trackpad are solid, with the experience remaining so after prolonged hours of use. Add to that the clarity and brightness afforded by its 13.3” Full HD (1920x1080) display, as well as its rapid multitasking functionality, and you’ve got a notebook that handle almost anything you may want to throw at it (except regular USB devices).

But at R30 000 in South Africa, the HP Spectre Pro 13 is one of the more expensive options around, not to mention that it’s a tad older than other devices. All in all, it should only be considered by those enamoured with its looks and with some cash to splash. 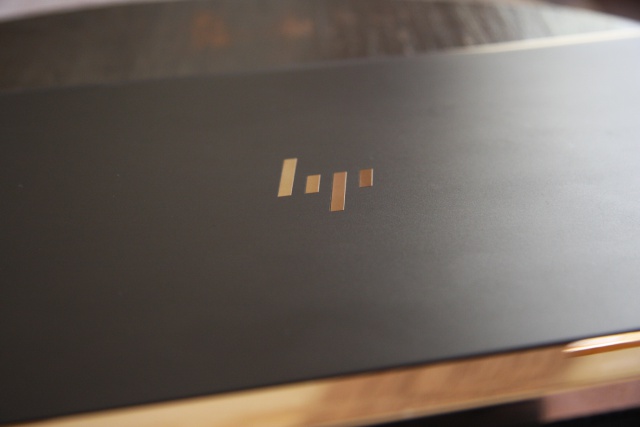