The past few years have seen excellent innovation in the running shoe market, with competition in midsole technology leaving runners with some awesome choices.

Puma has relied quite a bit on its IGNITE foam and NRGY beads combo for energy return in the past, but it seems it was not trusted by many runners to get them to the marathon mark, being more acceptable at lower distances. Now the company has stepped up a gear with its Nitro midsole tech line-up, also signing up US Olympian long distance runner Molly Seidel along the way.

Their flagship shoe, at least until the Elite version arrives locally, is the Puma Deviate Nitro. And after running with these for a month, it’s clear that Puma has got a winner on its hands. 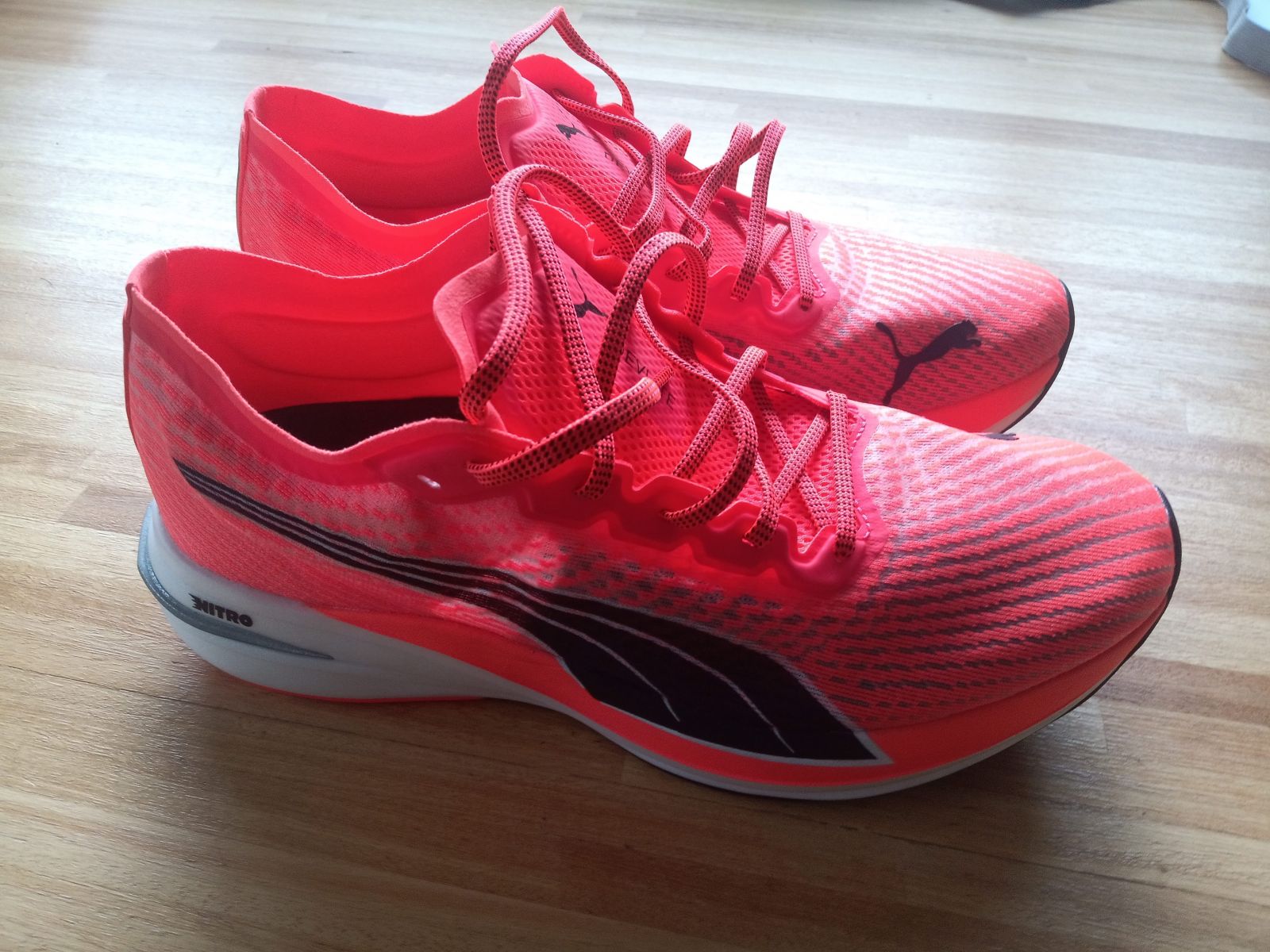 To start with the most important feature - the new midsole tech. Puma is betting on its Nitro foam technology, which the company pitches as a mix between lightweight and responsive. Put them on for the first time and you can feel that you’re dealing with a different beast. The midsole feels thick and bouncy - and simply walking around with them in the house you pick up a spring to them that kind of makes you wonder if you will be able to control it during a run.

On the road, however, the extra pressure of hitting the ground in stride makes these Pumas purr. Something just clicked and it felt to me that the Deviate Nitros added kick that was not there before.

Even though the midsole feels thick when walking in them, it does not come across that way on a run. Instead, there’s a smooth flow across strides. The sweet spot sits directly underneath the heel, but the midsole feels well spaced across the foot, so I never felt I needed more protection on the forefoot as an example.

During the launch of these shoes, Puma noted the Nitro midsole is infused with nitrogen gas through a process that makes it possible to combine three key benefits to the runner - responsiveness, cushioning, and a drop in weight. At 266 g per shoe, it’s a lot lighter than the new Adidas Ultraboost 21 (340 g), although heavier than the UA Flow Velocity Wind’s 241 g. 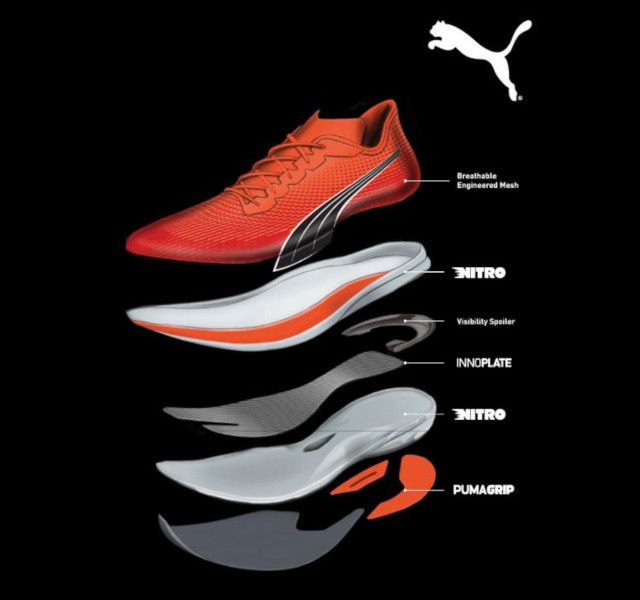 The Deviate Nitro contains two layers of Nitro foam, split with what Puma calls the Innoplate - basically a carbon fibre plate which can now be found in many higher-end running shoes. This rather large plate is said to provide quicker toe-off, which I noticed on faster runs. And faster these shoes certainly want to go.

266 g per shoe is decent and the Deviate Nitro does feel good on the feet. And as mentioned, the Nitro midsole combined with the carbon fibre plate make the Deviate Nitro a faster shoe. That said, the bounciness of the Nitro midsole means that it needs a bit of pace to keep it under control. When doing recovery runs or simply putting on slow kilos, the shoe feels more unruly, a bit like doing the school run in a Lamborghini.

A shoutout needs to go to the designer of Puma’s outsole, dubbed Pumagrip. This feels super grippy around corners and even though I missed most of the Gauteng afternoon showers, the few times that the road was wet it kept my feet firmly on the ground.

As far as wear is concerned, Pumagrip has worn a bit on the back of the heel, but far less so on the ball of the foot as other shoes tested at this distance (the image below is of the show brand new). Small pebbles don’t really stick into the outsole, but on one run I had a larger pebble wedge itself in the centre below the Innoplate. 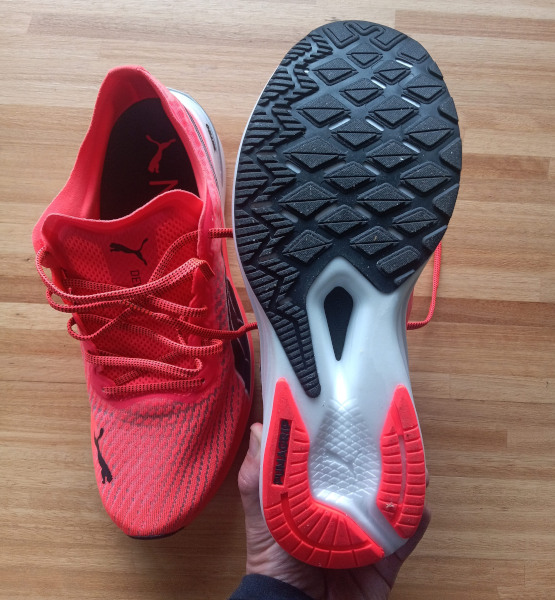 Finally, the mesh upper is breathable, with your foot kept in place by a sock-liner of sorts on the inside. There have been complaints online about chafing occurring on the heel and that the shoe does not do a good job of preventing slippage. The heel area does look strange, with Puma providing two cushions on the side but very little protection directly on the back of the heel itself. But having ran with both thick and thin socks, I did not have a similar problem and no chafing anywhere to be found.

Two minor points of critique are the print quality of the Puma formstrip on the side, which have started to come off on the midsole, plus the “visibility spoiler” that extends from the back – the added lip looks a bit strange. A minor point of joy is the Puma logo at the front of the Deviate Nitro, which while running looks like its pouncing. 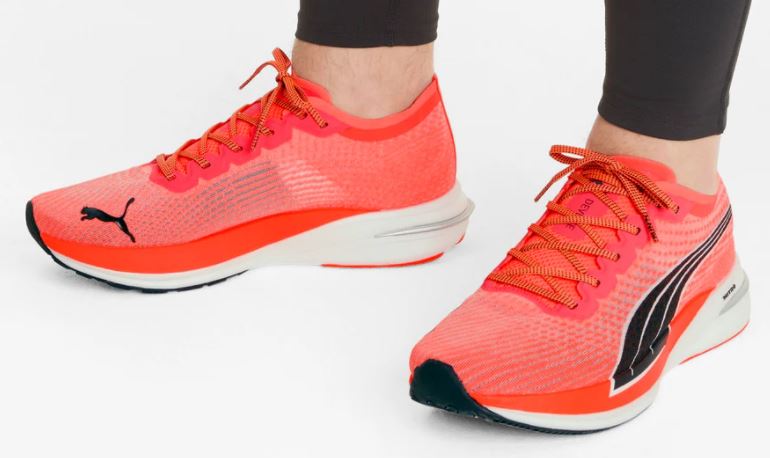 Having tested Puma shoes for TechSmart for close to a decade, it’s easy to say that the Puma Deviate Nitro are the best Puma running shoes I’ve ever ran in - by far. The Nitro foam lives up to Puma’s billing of providing lightweight foam which provides a definite kick without sacrificing cushioning in the process. The carbon fibre plate adds a bit extra on faster runs, plus you have a super grippy outsole.

This is the first Puma shoe in a long time that can go up against the best running shoes from the other brands. That said, it might be less suitable for leisurely paces.

Finally, the price, which is what might make or break the shoe. The Puma Deviate Nitro running shoes retail for R4k, which makes it more expensive than the new Adidas Ultraboost 21 (R3 600), UA Flow Velocity Wind (R3 500), New Balance Fuelcell Rebel V2 (R3 000) and Nike ZoomX Invincible Run Flyknit (R3 200). A more expensive shoe is difficult to find, with one of the few being nonother than the Nike ZoomX Vaporfly Next% 2, beating it at R4 600. Don’t get me wrong, the Deviate Nitro is a great shoe, but it does feel a bit much for a brand that is trying its damnedest to convert runners.

After a month running with the Deviate Nitro, we believe @PUMASouthAfrica has got a winner on their hands. Read our full review: https://t.co/TFQ4YEw5dz pic.twitter.com/AhmQajjjuJ