Full Disclosure: Shoes were received from Puma South Africa to test and were not returned.

The introduction of Puma’s new Nitro midsole tech saw the company renewing their efforts in the running shoe market. Indeed, the company’s Nitro line-up has seen a marked increase of interest in the brand’s line-up, now being taken more seriously, coinciding with important signings such as American Olympian Molly Seidel.

After testing the Deviate Nitro (review), which has a kick like a donkey, the next pair Puma sent through was the Magnify Nitro SP, providing the thickest chunk of Nitro midsole in the new range. As such, it provides a comfortable run, perhaps the standout feature of the shoe. 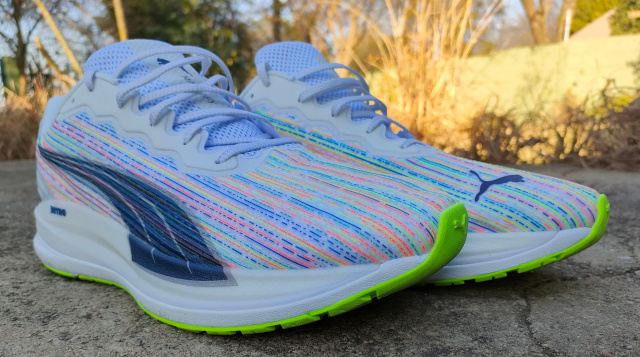 First, the looks, which in the Magnify Nitro SP’s case carries the distinct design elements of Puma’s Spectra style pack. Personally I find the colourful lines on the white body, supported by a white midsole and green outsole, far more appealing than the harsh orange of the Deviate Nitro (which is now also available in the Spectra colourway).

As can be imagined, they do tend to pick up dirt far easier, especially if you find yourself off-road sometimes. Puma included reflective material around the lace-up area, plus a bit on the tongue, but unfortunately not on the back of the heel cage.

Talking of which, the heel cage is made up of “moulded heel technology”, greyish in colour and thicker in appearance than most of Puma’s offerings. It’s not a hard heel cage and comfy in feel, much like the rest of the shoe. That said, the strange look of this heel cage looks almost out of place in this type of running shoe.

I was slightly concerned about the upper of the shoe, seeing that the Spectra colourway is actually a plastic mesh outer skin on top of a sock-like inner lining. This double layer is not as breathable as single layers and runs slightly warmer than normal. This plastic nature of the outer skin also allowed for a dimpled appearance on the shoe and not smooth like a knitted upper, although that might be nitpicking. 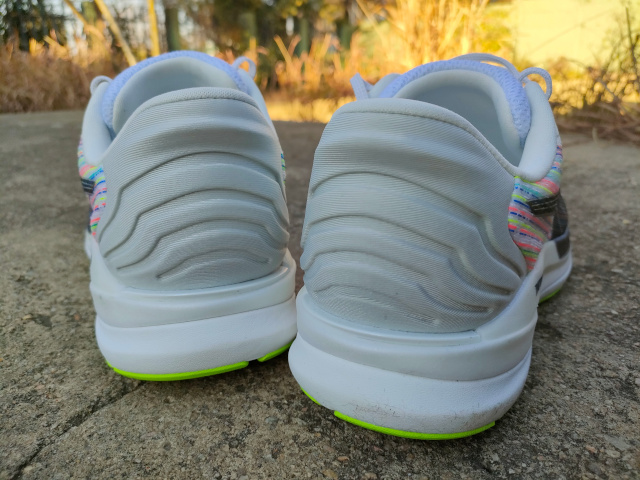 While the shoes might have the look, the proof is in the pudding, or in this case on the road. As mentioned, Puma’s Nitro midsole features heavily, which claims both responsiveness and cushioning in a lighter package thanks to being Nitrogen infused. However, Puma also added a chunk of ProFoam, another high rebound EVA used in other its older shoes.

The combo does the trick, with the shoe providing comfort above anything else. While running there’s an easiness to the shoe, providing more than enough support from heel strike to toe off. The thickish sole is especially present when going downhill when heel impact is more vigorous than usual. You can feel the midsole quietly doing its job – taking the knock and expanding afterwards; especially present between the ball of the foot and the bridge.

Inside the shoe there's enough space without chafing occuring on, for example, the bridge of the foot, plus these fit true to size. Lacing wasn't a problem and I did not have a problem with slippage during runs. 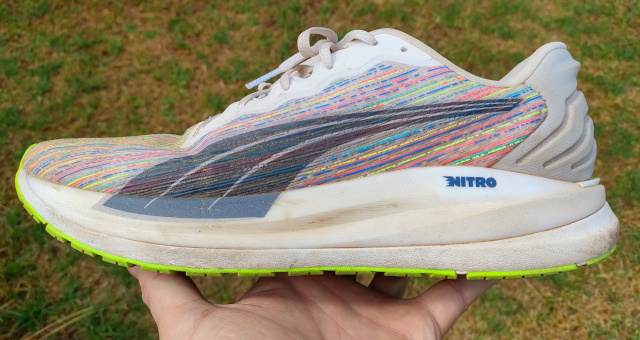 After a few runs and not as white anymore

What Puma didn’t include in the Magnify Nitro is a carbon fibre plate, as seen in the Deviate Nitro and other highly coveted running shoes. The Innoplate as Puma calls it, does a lot to add propulsion, one of the reasons why I was so fond of the Deviate Nitro.

But in a sense, the adage of ‘horses for courses’ makes sense here too. I’ve read critiques of the Magnify Nitro that it’s less of a performance shoe than expected. But I’m not quite sure if it's supposed to be that. The Magnify Nitro is the shoe you want on when you are about to start a long run which you are simply not in the mood for. It gets the job done without incidents, and in as much comfort as possible. And in that sense, it’s a saloon, not a race car. 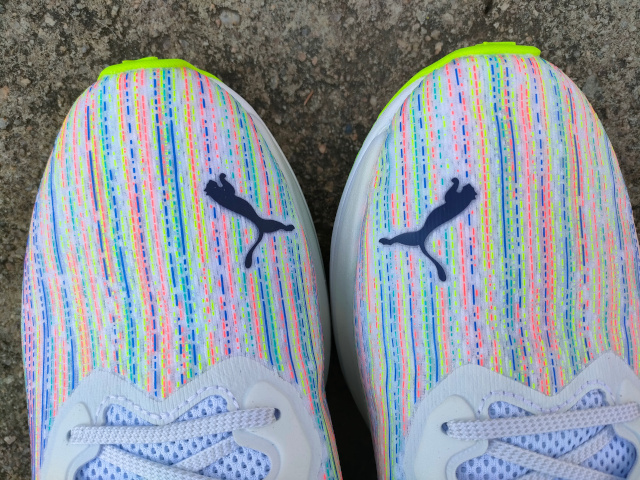 Having just said that, can you go fast in these? You can, and you’ll feel the midsole doing its work just in front of the ball of the foot, towards the bridge. At 325 g for the size 10, the Magnify is actually not as heavy as I expected, weighing less than the UA Hovr Machina (343 g) but definitely more than the racy Deviate Nitro at 284 g.

On the outsole is Pumagrip rubber that’s sticky enough to help you around corners. And while I did not test these in the rain it did hold its own on the trail. I also thought there was less wear on the outsole this time round compared to the Deviate Nitro. 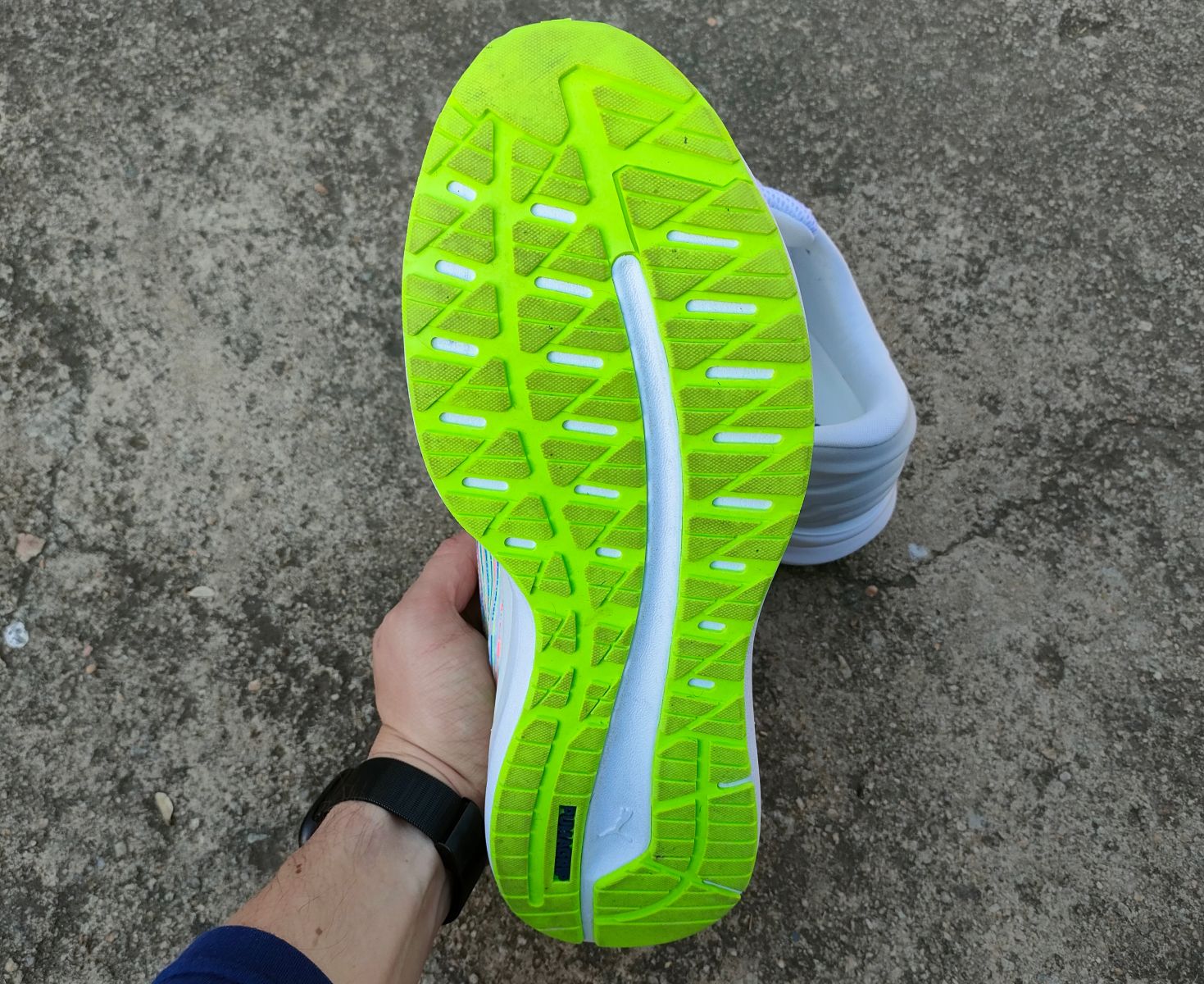 Just before its first run

The Puma Magnify Nitro SP is meant for runners valuing comfort over longer distances, and it’s difficult to fault these shoes for it. You get a decent blob of Nitro foam to help with cushioning, while it’s actually lighter than one would think for the chunkiness of the midsole.

A carbon plate would always have been handy, but then again the Puma Magnify Nitro SP is not really built for speed. Instead these trainers will take you over the finish line (or whatever we currently have without any large races anymore), with as much ease as possible.

We’ve seen an alarming increase in running shoe prices over the past few years, and Puma is also responsible, with the Magnify Nitro retailing for a hefty R3 300 here.

Personalised health – the next frontier of biotech – is here now
Is this the next step in software?
Fitbit Versa
ScienceLogic expands reach to South Africa amid demand for AIOps