FULL DISCLOSURE. Shoes were received from Puma South Africa for review and not returned.

Puma isn’t a stranger to trail running, but with the launch of the new Nitro cushioning tech, the company has taken a renewed interest in all things running. This means the trail shoes also get a makeover, with the Puma Voyage Nitro their first big trail release in a while, also the first to feature Nitro in the midsole. 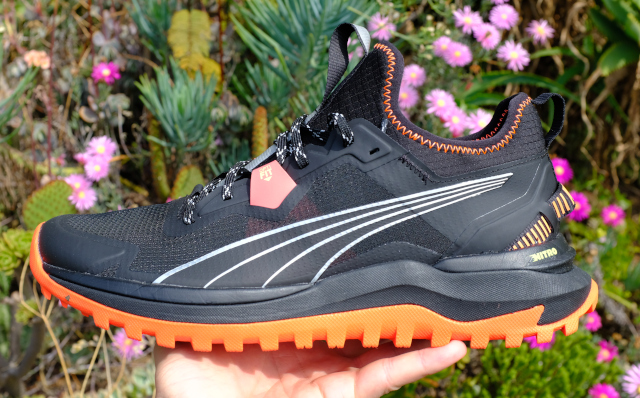 As most trail shoes, the Voyage Nitro comes with a more aggressive design, with the black/lava blast colourway particularly striking (and actually more reserved than some of Puma’s designs in the past). It looks like it belongs in the dirt, with the black uppers less noticeable when dirty, and the orange/red linings adding a racing-stripe appeal.

The fit is quite interesting – stick your foot in and it’s possible to wear the shoes without further tying the laces, thanks to a tightish inner lining. The lacing system includes what Puma calls Optifit, which is basically a tag that connects one of the lacing parts directly to the midsole. This means when lacing you pull not only the upper but also the midsole, so you know your foot is secure without slippage.

To help get these on, there are two tags on the tongue and back of heel area, helpful because the tighter sock-like liner around the collar can make it tricky to get your foot in. Finally, there’s another tag on the lower heel area, which seems to fit no other purpose except for branding and seems superfluous. Overall, fit was good, although the Voyage Nitro is perhaps narrower around the bridge of the foot. 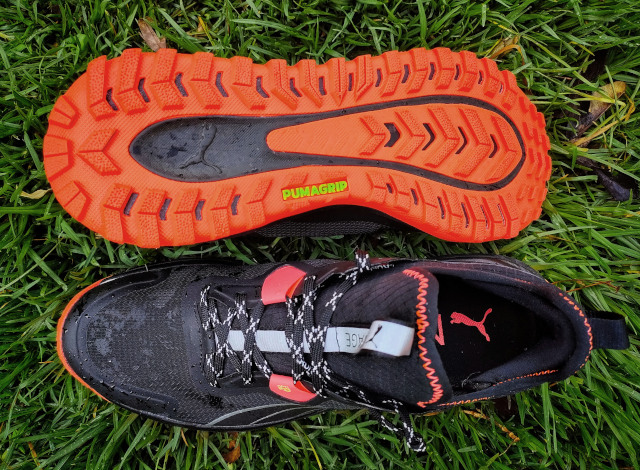 Trail shoes by nature are heavier than their road-running brothers. In the case of the Voyage Nitro perhaps less so. Standing at 344 g for the size 10, it’s only slightly heavier than the UA Hovr Machina (330g) and the Puma Magnify Nitro (324g). Granted, both these are on the heavier side of the road running spectrum.

Still, it’s a decent achievement to keep the weight below 350 g, and for those coming from the road, it won’t take you long to get used to the Voyage. That said, there are lighter trail shoes available. 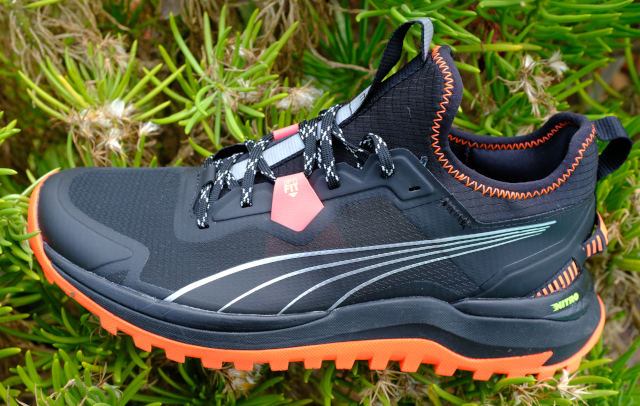 As far as the upper is concerned, you’re actually dealing with two pieces of material overlapping on certain parts. On the inside is a liner type of material, with a comfy padding surrounding the foot below the ankle. Starting around the lacing area, there's a mono-mesh upper on the outside.

What this design effectively does is keep small rocks, debris and grass out of the inside of the shoe, with this rather making its way to the area between the inner and outer material. The shoe is definitely breathable and my feet did not feel particularly hot in these, despite the double layer of material.

The mono-mesh on the outside comes across as durable, plus, for the most part, it keeps the worst dirt out. [UPDATE - what also happens is that grass and other debris manage to find a way between the outer and the inner layers, which requires a clean ever so often.] It’s not waterproof, although Puma mentions a toe drainage port. This port isn’t easily detected, although I can say that when running through water, the shoe does drain effectively, so you’re not stuck with a heavy water-drenched mess.

Puma provides a nice chunk of curled up outsole for the toe cap to protect the front toe area, with extra plastic here around the toes on the uppers. 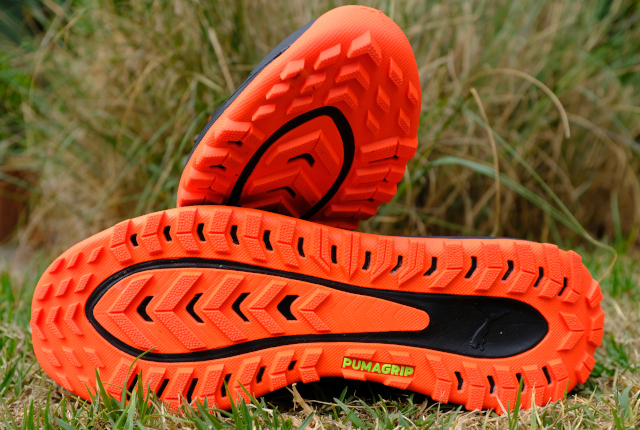 As expected, the outsole runs broader than usual to provide as much traction as possible. Another aspect Puma’s new range gets right is the Pumagrip outsole. In the case of the Voyage Nitro’s outsole, it seems like it has been adapted to what Puma calls Pumagrip ATR rubber. It looks and feels the same as the Pumagrip on the Magnify Nitro, but it’s a lot thicker, with stout lugs to help grip through mud, sand, rocks, etc. I thought the outsole dealt with these elements really well, even making the most of slippier conditions. I had no concern about taking these through thick puddles of mud or water logged areas..

For the most part, the design of the outsole, with lugs set rather far apart, helps to keep rocks from sticking into the crevices. The lug size ranges from 2.5mm through to just a bit above 3 mm.

However, there’s one part of the outsole that raises concern - right in the centre of the heel of the foot the midsole is left exposed by an absence of outsole, only midsole. Even though the surrounding Pumagrip raises this part off the ground, I would have preferred it covered. 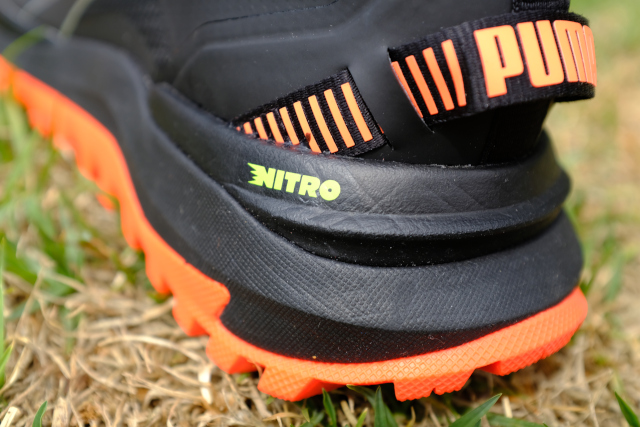 Puma punts the fact that there’s Nitro tech included in the midsole, and just like on the Magnify Nitro, also Profoam Lite. I’ve been impressed by what Nitro has to offer, providing a really great kick in both the Magnify Nitro and Deviate Nitro. So I was excited to see what it offers off-road.

Some trail shoes have a tendency to run quite flat, offering protection against the elements but not really much in terms of energy return. In the case of the Voyage, you do have the large thread of outsole that tempers what the Nitro/ProFoam Lite combo does.

However, there’s a definite kick on flatter areas on the trail, while overall the shoe does not feel sluggish. I could feel it working its magic just in front of the heel towards the bridge of the foot, especially with flat road underneath. This makes me believe the Voyage could be used on the road just as easily as off it. There is no midsole carbon plate for extra kick though.

Puma checks almost all the boxes with the Voyage Nitro trail running shoe, which effectively reboots their trail range. The shoe has a deliciously grippy and durable outsole, a great fit enhanced by the Optifit connection to the midsole, it’s not that heavy, and there’s a chunk of Nitro foam to add a bit of kick to your runs.

With the Voyage Nitro, Puma has managed to create a really great trail experience, while offering decent protection against the elements. The shoe is not perfect, but it sure creates one hell of a start to their Nitro trail range.

PROS
Great grip, decent fit, not that heavy, Nitro added for a bit of kick