Can’t get enough selfies? Think your arm is too short, and a selfie-stick just won’t cut it? AirSelfie flies to the rescue. After successfully completing a Kickstarter campaign (they received €574 504 in pledges for a €45 000 goal), the small little drone is now available for pre-order.

Billed as the world’s smallest portable flying camera, the AirSelfie is a miniature drone with a built-in 5 MP camera that can also record Full HD videos. With a weight of 52 g and a thickness of 10.6 mm, the company is so confident of its portability that they are selling it with a smartphone case that it can slip into, so that you can carry it with you. You use the AirSelfie app to control the drone, and it has a decent range of up to 20 m. Once it snaps a pic, it’s stored on the built-in 4 GB storage, or transmitted via the 2.4 GHz Wi-Fi network it generates to your phone. 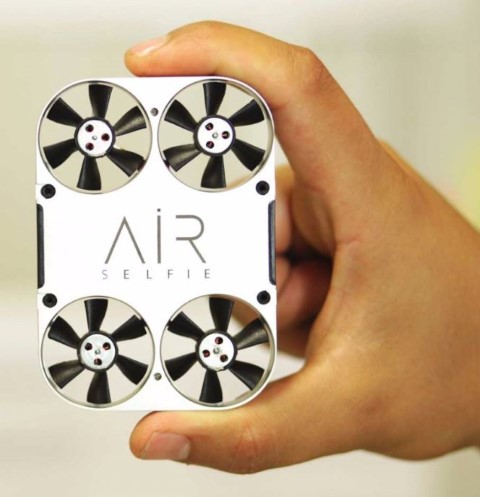 Our concern with the drone is its battery life of three minutes, which seems only about enough time to launch the drone and get a couple of good pics. Although the smartphone cover can recharge the AirSelfie, it takes 30 minutes to do so. You can also buy a 12600 mAh powerbank that recharges the drone up to 20 times.

On pre-order the AirSelfie is available for $261.45, which the company notes is 30% off the regular price. If the thought of having your own private little drone ready to take pics at any time, have a gander here.