An inside look at Ster-Kinekor's new D-Box cinema experience

Head to one of the major Ster-Kinekor cinemas across the country and you're normally greeted with three different viewing options depending on the film. A standard 2D theatre, a 3D glasses variant, or a large-scale IMAX screen. There is, however, a new option on the horizon that Ster-Kinekor promises will deliver a more immersive experience.

Powered by Canadian entertainment company D-BOX, Ster-Kinekor is introducing state-of-the-art seats to a handful of its cinemas. These will move in correlation to the film being screened, and feature the ability for viewers to calibrate their experience according to their preference.

The seats in question, which are said to cost upwards of €3 000 a piece, are currently being installed in four Ster-Kinekor cinemas located at The Zone Rosebank, Mall of Africa, Cavendish Square and Gateway Shopping Mall. Each of these venues will have at least one theatre which features 50 D-BOX designed seats.

We got to see the Mall of Africa installation in process, and the seats are placed in the same theatre as standard seats. Part of the reason why they don't have dedicated theatres at this stage is cost, as well as Ster-Kinekor wanting to gauge their popularity in coming months, but we also think it's to give other moviegoers a sense of serious envy.

While the D-BOX setup is a first for Ster-Kinekor, it's not for the country, with select Nu Metro cinemas touting a similar experience with 4DX. What makes the D-BOX version different, and superior in Ster-Kinekor's opinion, is that each seat can be individually controlled, as opposed to an entire row of seats being connected.

This affords viewers the ability to calibrate the intensity of the experience, which is done via controls on the seat. As such, if you're not enjoying the shakes, rolls and vibrations, you can scale them down or shut them off completely. In D-BOX's experience though, there have only been a small number of incidents where viewers have not enjoyed the seats.

As far as the seat motion is concerned, D-BOX's engineers sit through all the major movie releases, choosing points in the film to add a tilt of the chair, vibration or shake. They can also customise the immersive experience in accordance with the film, which means each one is unique. It's not just the big budget action movies that get the D-BOX treatment though, with the company doing the same for kid's films to great effect too. Just don't expect a D-BOX version for something like The Notebook. 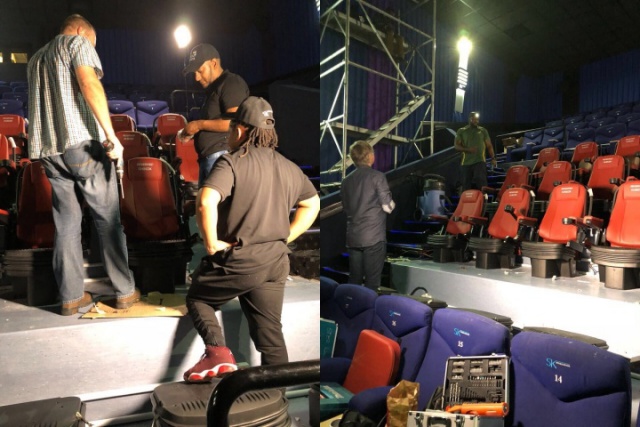 The D-BOX theatres are currently in action, with a soft opening of the experience being made available for films like Justice League and Coco. The real opening, however, will be for Star Wars: The Last Jedi, which hits cinemas on 15 December. This the two companies enthuse will showcase just how amazing the D-BOX seats can be for movie watching.

The experience won't be cheap though, with tickets costing an estimated R117 more than a normal ticket. While acknowledging the cost, Ster-Kinekor is confident that the D-BOX seats will go down a treat with local consumers.

"As technology changes the world, we are keeping abreast of global cinema innovations with D-BOX. We are committed to our customers and delivering the latest technology to enhance their movie experience by providing a feast for the senses," adds Motheo Matsau, chief of sales at Ster-Kinekor Theatres.

Next year we should see even more D-BOX seats popping up in Ster-Kinekor theatres, with the company noting that they are perfect for more premium movie going experiences like their Cine Prestige and IMAX venues.

With 3D movies now a mainstay, it's time for something more. Ster-Kinekor believes D-BOX is the answer, despite being a bit pricey at this early stage.

Will you lose your job to a robot?
Puma releases limited edition Max Verstappen Speedcat Pro GT race boot
Fitbit Versa
Google releases Android usage data - June 2013
With the end of 2020 now in sight, itâ€™s time for banks to start asking - whatâ...
Digital inclusion: What does it bring to the future of connected vehicles?
Read