Audi expands A3 range with Sedan

After launching the new generation A3 in a 3-door guise during November 2012, and the A3 Sportback in April 2013, Audi has now debuted its third iteration in the form of the A3 Sedan.

This four-door saloon has a long 2.64 m wheelbase and an overall length of 4.46 m, which allows some added legroom for rear bench passengers, as well as a boot capacity of 425 litres. If more storage space is required, buyers can fold down the rear seats to boost the luggage capacity to 880 litres. 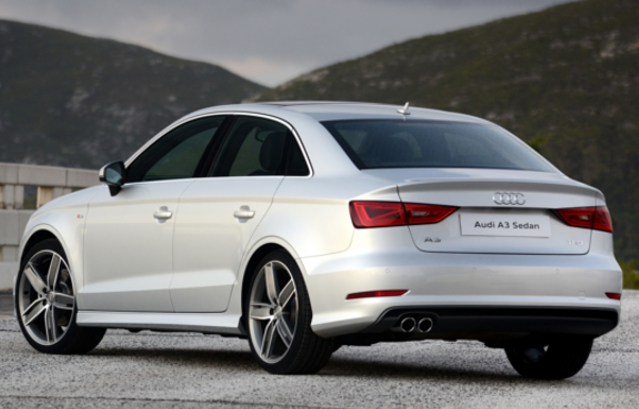 In terms of engines, the lineup for the A3 Sedan consist of two petrol powerplants, namely the 1.4T FSI and 1.8T FSI. The former churns out 92 kW (90kW for the S tronic version) plus 200 Nm of torque and the latter 132 kW and 250 Nm. A singular diesel powerplant can also be opted for in the form of the 2.0 TDI, which produces 110 kW of power and 350 Nm of torque. All models are only available in SE specification level, and buyers can either purchase the car with a manual gearbox or S tronic transmission. How much do you need to save?

Pricing for the Audi A3 Sedan as of January 2014 is as follows and includes all taxes as well as the standard five year or 100 000 km Audi Freeway Plan.

Audi stated that a hot version of the A3 Sedan - the S3 Sedan - is due for local introduction in mid-2014, with a A3 Cabriolet also on the cards for the first half of 2014. Further details on pricing and specification of these models will be released closer to their South African debuts.

In other motoring related news, check our review of the BMW 320i Gran Turismo here, to find out if its added practicality translates into a subtraction to its driving appeal.