The Detroit Auto Show got underway yesterday. The early showings seem similar to that of the vehicles on display at CES just a week before, as carmakers all unveiled their interpretations of connected or environmentally focused offerings. Audi has now showcased a concept car aimed at the latter - the h-tron quattro.

The "h" in its title refers to hydrogen, as this concept is capable of outlasting its battery powered rival from a full tank. According to Audi, the h-tron can cover up to 598 kilometres. As such, on paper it can beat Tesla's Model S (85 kWh) mark of 510 kilometres by quite some margin.

Part of the reason for its substantial driving range is the three separate fuel tanks it has hidden underneath the passenger and luggage sections of the car. All three of which can be refuelled in under four minutes according to the German carmaker. 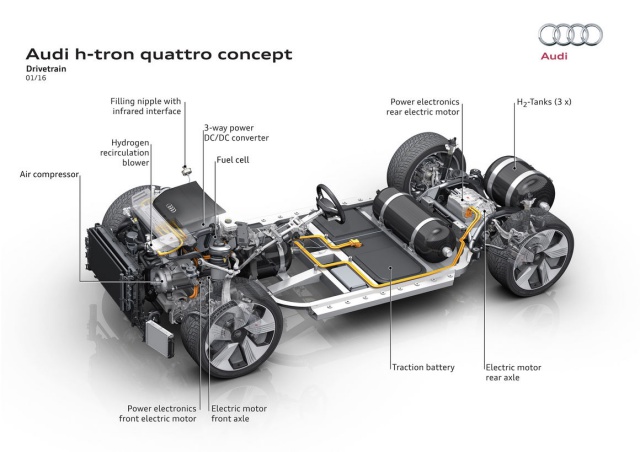 Although the h-tron quattro is primarily focused on fuel efficiency, it does have a bit of power to throw around. The hydrogen-powered fuel cell can generate 110 kW worth of power, with an additional 100 kW kick coming from a lithium-ion battery when a quick burst of acceleration is needed. This additional battery cell is also recharged while braking, which means it only needs a power point to recharge far less than its fully electric counterpart.

Added to its eco-friendly status is a fair deal of speed, capable of reaching 100 km/h from a standstill in under seven seconds, as well as having a top speed of 200 km/h. What impact this has on the aforementioned 598 kilometre range is undisclosed, but it's safe to say that Audi has indeed made an impact on the first day of the Detroit Auto Show. 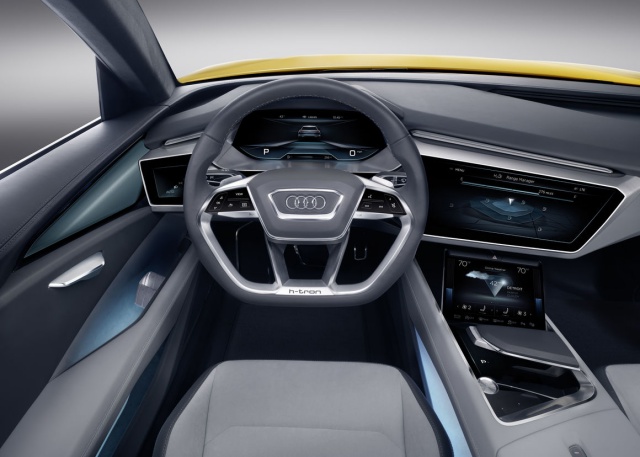