Tech giant Google has released the latest Android mobile operating system (OS) usage data, revealing which version of the platform is doing duty on users’ smartphones and tablets. These figures were compiled from data Google collected during a two week period that ended on 8 July 2013.

The most recent version of Android, namely Jelly Bean (Android 4.1 - 4.2), has at long last dethroned long serving king of the Android hill, Gingerbread (Android 2.3.3 - 2.3.7), as the number one used version. Jelly Bean now powers 37.9% of all Android-running mobile devices (up from last month’s 33% usage stake), while Gingerbread handles the operating on 34.1% (down from 36.5%) of all Android-running devices.

Android Ice Cream Sandwich (ICS, Android 4.0.3 - 4.0.4) continues to melt in the glow of the rising Jelly Bean star, with this version of the mobile platform now laying claim to a 23.3% Android usage stake. This marks a 2.3% decrease when compared to last month’s 25.6% share.

Android veterans refuse to be put out to pasture

Android veterans, Honeycomb (Android 3.2) and Donut (Android 1.6), both still cling to their respective 0.1% Android usage stakes. Eclair’s (Android 2.1) share of the Android usage pie drops slightly from 1.5% during June to 1.4% currently. The same drop of 0.1% was registered for Eclair’s successor, Froyo (Android 2.2), as its Android usage stake decreased from 3.2% to 3.1% this month.

Google’s Android mobile platform gets criticised a lot over its OS fragmentation, whereby users of Android-operating smartphones and tablets utilise a great many variety of platform versions. This leaves application developers perplexed as to which version of the mobile OS, they have to optimise their applications for.

The problem of OS fragmentation is not a problem when developers create iOS apps for instance, since the clear majority of iOS-running mobile devices employ the latest version of Apple’s mobile platform.

The Cupertino-based tech outfit’s latest (29 June 2013) figures reveals that a whopping 94% of iOS-powered mobile device users are utilising iOS 6, while only 5% use iOS 5 and the remaining 1% employ an older version of the OS. 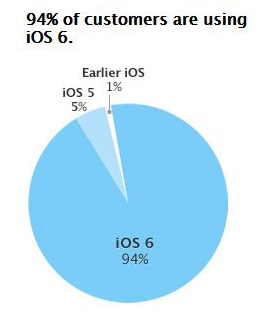 In related news, check out our most recent Android Apps of the month (July 2013) here.