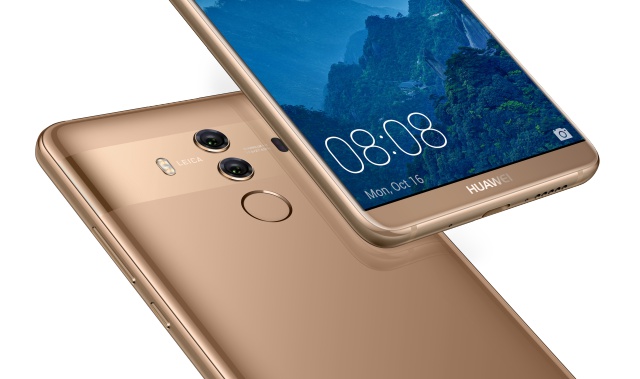 Huawei unveiled all three in Munich, Germany this afternoon, just as it did with the impressive Mate 9 last year. With Samsung and LG upping things a few notches with the Galaxy Note 8 and V30 respectively, Huawei needed to do likewise. Did it manage to do so?

On paper it certainly looks that way. The new devices feature a vastly different design aesthetic to their predecessor, and in certain lights appears to resemble the Galaxy S8. That said, the corners of its body do seem to be a tad squarer than the South Korean company's offering.

Another design cue aiming to differentiate the Mate 10 series from the number of flagship Android devices out there, is a "Signature Stripe" on the rear. On the Mate 10 and Mate 10 Pro it horizontally across the Leica camera setup, and on the Porsche Design model lays vertically.

Switching to the front, both the Mate 10 and Mate 10 Pro feature a longer FullView Display, which lessens the size of the bezels and serves up a 18:9 aspect ratio. On the Mate 10 the screen is 5.9" with a 2560x1440 resolution, and the Mate 10 Pro is slightly larger at 6" and supporting HDR10 visuals.

Moving onto the elements powering this device, the entire Mate 10 series features the Kirin 970 chipset which Huawei unveiled at IFA 2017 in September. This new Mobile AI CPU is octa-core in nature, split between two quad-core processors.Clocking at a combined 4.2 GHz, the most important aspect of the Kirin 970 is its onboard AI capabilities. Huawei has not gone into deep detail about the system, but did demo it in action while object detecting, with the Mate 10 performing faster than the iPhone 8 and Galaxy S8.

Another significant feature of this native AI system will be how it improves the camera experience, with a reported 100 million plus images already registered in its system. Added to this will be real-time translations of foreign languages, powered by a system designed in conjunction with Microsoft.

Sticking with the camera setup, it is once again is Leica-certified and dual-lens in nature, with a new f/1.6 aperture available. The lenses are still 12 MP RGB and 20 MP monochrome in nature, but Leica has also thrown in a dual ISP system for good measure.

Another noteworthy part of the Mate 10 series is the battery onboard, with Huawei opting for a generous 4000 mAh unit that can reportedly deliver two days life under normal use. Added to this is fast charging, capable of going from 1% to 58% in 30 minutes.

All three devices are currently on the cards for a South African release, with South Africa listed among the first wave of countries by Huawei. To that end, the company aims to get the Mate 10, Mate 10 Pro and Porsche Design Mate 10 on our shores in early November.

Local pricing remains unconfirmed for now, but at today's launch event the Mate 10, Mate 10 Pro and Porsche Design model are recommended at €699, €799 and a whopping €1 395 respectively.