One’s personal identity is an asset that is so easily taken for granted in modern society, until the unthinkable happens, and you find out that you have been a victim of identity theft.

In a bid to combat this scourge, South African biometrics company Ideco unveiled its next generation identity assurance ecosystem, which is designed to deliver fraud-proof trusted identity authentication, confirmed with a digital certificate of authenticity in seconds.

Jonathan le Roux, the president of the Association of Certified Fraud Examiners (ACFE) chapter of  South Africa, pointed out that all too often people aren’t even cognisant of the fact that their identity has been compromised, only finding out when they apply for credit or discover  they have been blacklisted through no fault of their own.

He elaborated that this leaves combating identity theft as being reactive, rather than proactive and preventative. Exacerbating matters is that identity theft is pervasive, happening in every sector, and global in its nature, which means someone in South Africa may have had their identity stolen by a criminal in the US. 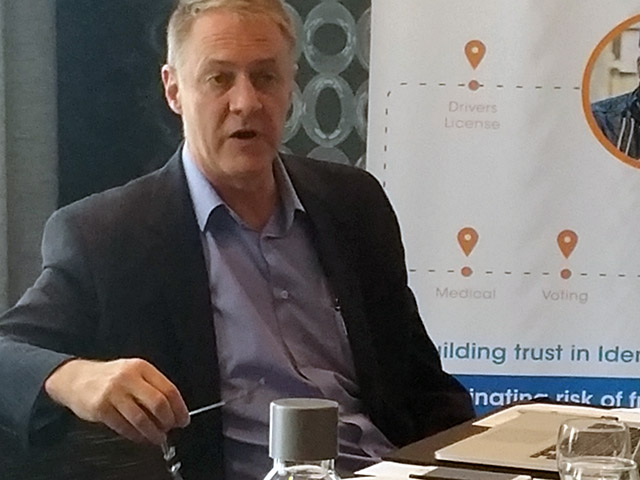 Solution for the digital age

Marius Coetzee, the CEO for Ideco biometrics believes the company has a viable solution, with their latest technology offering what he calls Identity 4.0.

He elaborated that Identity 1.0 entailed looking someone in the eyes and shaking hands. The second generation of identity verification consisted of a piece of paper, namely an identity document, that people would use to identify and authenticate ourselves. Identity 3.0 was when that document was made smart, boasting some biometric information which was loaded onto it. “Identity 4.0, however, is the fusion of actual, physical and the digital which happens real time and brings together the owner of identity, the issuer of identity verification and a biometrically enabled identity assurance system,” he explained.

It is the latter that is the company’s focus with its Identity as a Service (IDaaS) offering, delivered via its nuID app and made available through a cloud-based platform.

The way it works is that Ideco IDaaS enables organisations to capture the credentials and biometric data of the consumer at the point of contact. The data, photo and fingerprints are then captured in a customisable template defined in the API, and communicated securely to Ideco’s cloud-based backend service for processing.

The IDaaS ecosystem validates the data in real time against multiple trusted national databases, including the Home Affairs database. When full trust is established, the system generates a seal of authenticity which both verifies the customer identity and digitally signs the certificate in compliance with the Electronic Communications and Transactions (ECT) Act. “The seal of authenticity is unique in South Africa, in that it delivers irrefutable proof of identity that holds up in a court of law,” says Coetzee.

The Ideco IDaaS ecosystem, first released toward the end of 2016, has been piloted by a major South African enterprise, in part to assess customer acceptance, according to Ideco. “There was a high level of acceptance, once customers understood the value of the process and the benefits to them in owning their identity through the use of the nuID mobile app linked to the ecosystem,” elaborated Coetzee. The nuID app is hosted securely in the cloud and access to their identity data is enabled by the owner of the data – the consumer being identified – via a mobile phone. Citizens will in future maintain their credentials on the new dedicated and secure portal - www.nuid.me.

Coetzee asserted that, for the consumer, having access to their secure and irrefutable proof of identity via their mobile phone, will eliminate the risk of identity fraud. “This means they no longer have to submit certified copies of their identity documents, which gives them control and visibility over the verification process and builds trust in their transactions with service providers,” he explained.

For those who still doubt whether Identity 4.0 is needed, Davina Myburgh, the director of Call Credit at Transunion, had some sobering insight. She noted that fraud syndicates are becoming increasingly patient, targeting medical students, for example, who in several years time may have access to the sensitive information of hundreds of patients.

Furthermore, Myburgh added, people themselves are making identity fraud even easier to commit, by having one or two passwords across multiple accounts. This means that if their social media account, for example, is hacked, the same credentials can likely be used across their banking, email, and home Wi-Fi network.

Much like fraud syndicates have a long term view, so too does Ideco. Coetzee enthused that the Ideco IDaaS ecosystem and the nuID app also paves the way for a future in which trusted digital identification via a mobile device unlocks all services and transactions. “In future the mobile phone will be the bearer of your identity, and we expect to see the private sector driving this revolution in response to the need to clamp down on identity fraud. As the first foolproof next-generation identity verification ecosystem in South Africa, we believe Ideco’s IDaaS delivers unprecedented levels of authentication and full trust in identity for the first time,” he concluded.