In its 40th year, Rubik's Cube is going digital

The 2020 Red Bull Rubik’s World Cup, the first ever digital speedcubing competition, will witness the debut of the new digital Rubik’s Connected Cube. This new digital Cube has an embedded sensor that connects via Bluetooth to an app, allowing for tutorials, challenges and statistics. Importantly, it connects to the Rubik’s Arena, allowing amateur and professional competitive cubers to compete virtually in the Red Bull tournament.

Christoph Bettin, CEO for Rubik’s Brand, notes the digital Connected Cube opens a new dimension of Cube solving. He believes it to be the natural next step in the evolution of Rubik’s Cube, happing in the 40th anniversary year of this square puzzle.

With the Connected Cube, once you’ve mastered the solve you can use statistics and analytics to improve your speed and track your performance and progress. The new Connected Cube and its app was designed in partnership with GoCube and will be available to pre-order from Tuesday 18 August for an exclusive pre-sale price of $49.95 from www.rubiksarena.com. We are unsure if South African’s will be able to get their hands on one, unless through import. 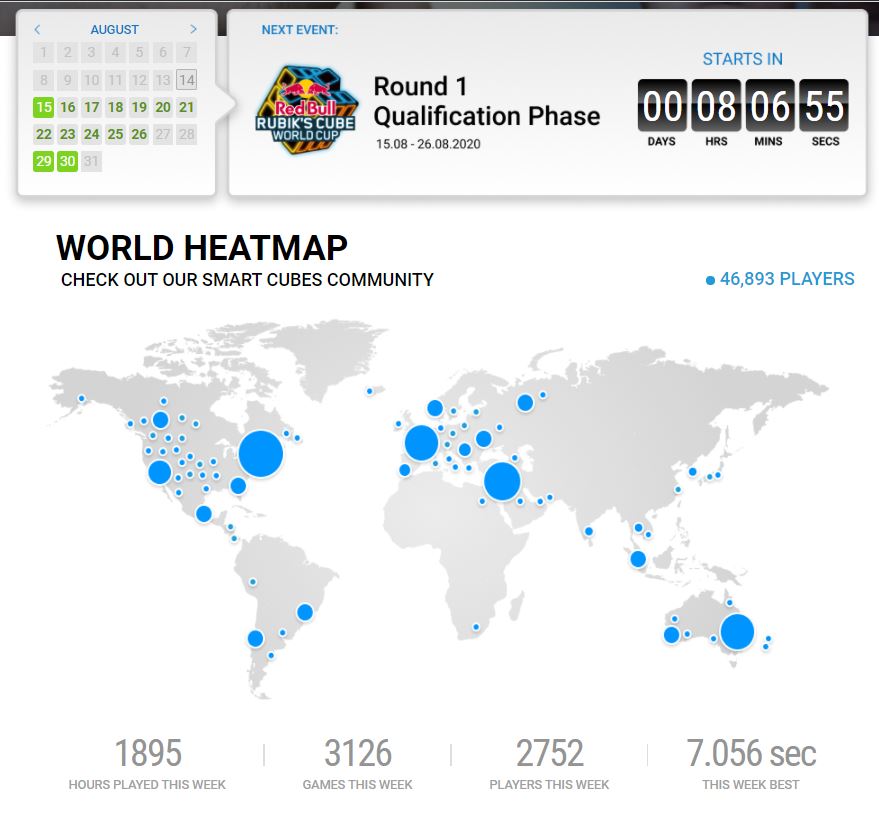 “The exciting element is that this Connected Cube will encourage cubers to interact with others from around the world, starting with the first ever digital speedcubing competition, in the form of the Red Bull Rubik’s Cube World Cup. And we must not forget that you will also be challenged to improve your aptitude in science, technology, engineering and maths,” says Bettin.

The Red Bull Rubik’s Cube World Cup, with four qualifiers taking place online between Saturday 15 August and Saturday 10 October, and a World Final on Saturday 7 November 2020, is a global competition designed to challenge the most accomplished speedcubers in the exhilarating emerging sport. Now in its third season, the World Cup advocates speedcubing as a professional mind sport and gives cubing athletes the opportunity to compete in new formats.

The World Cup is organised by Red Bull in collaboration with Rubik’s Brand and aims to develop more opportunities and visibility for the cubing community. To take part in the digital qualifiers, players will need to have a Rubik’s Connected Cube or a GoCube, and download the companion app. Winners of the global and local qualifiers will join the champions from the 2019 season - including Max Park (USA), Juliette Sebastian (France) and the Weyer Brothers, Sebastian and Philipp (Germany) - who have been awarded a wildcard, at the November showpiece.

In 1980, the Rubik’s Cube was officially introduced to the world. What started out as a puzzle created by Professor Ernő Rubik to teach architectural students has evolved into the world’s most successful single toy. It is perceived globally as an art form and also an iconic symbol of intelligence and problem solving.

Now in its 40th anniversary year, nearly half a billion Cubes have been sold to date with 2020 set to be a breakthrough year with over 20 million Rubik’s products expected to be sold globally, according to Rubik’s Brand. Adding to the excitement of the anniversary, Rubik’s has formed several partnerships to create brand new and unique Rubik’s themed products outside of the usual games and puzzles. These include Etch-A-Sketch, The Op, Perplexus, DeKryptic and Marvin’s Magic.

Within the USA, You CAN Do the Rubik’s Cube program typically places cubes into the hands of half a million students every year, helping them learn critical STEM and STEAM concepts.

Now in its third year, the 2019 Red Bull Rubik’s Cube World Cup Final took place in Moscow, which was the culmination of many speedcubing events that have taken place in multiple countries including Brazil, China, India, Mexico, Russia and Spain.

The Red Bull Rubik’s Cube World Cup is a global competition designed to challenge the most accomplished speedcubers in one of the most exhilarating emerging sports. The World Cup continues to bring additional opportunities to compete with speedcubers from around the world. In the finals, there will be three game modes: Speed Cubing, Fastest Hand (one handed) and Re-Scramble plus events for both men and women. All participants are aged 16 and over.