LG Electronics has finally launched its latest flagship smartphone locally. The G2 was unveiled at an event held in Sandton, Johannesburg. The Korean company’s G2 will be available from local operators from the 1st of November for a recommended retail price of R8 000, making it cheaper than the Samsung Galaxy S4 (review), Galaxy Note 3, and Sony Xperia Z1 (review).

Beyond the excellent quality of photos, videos and webpages, another feature arrow in this screen’s quiver is its barely-there (2.65 mm) edge-to-edge bezels. This, as its makes consuming content, especially videos, more immersive as the hardware more easily disappears into the background with the video taking centre stage.

A novel approach to button placement

Helping the G2 stand out from a sea of Android smartphones is its button placement, seeing that the volume rocker and power button can be found on the back of the smartphone. According to LG, this unique Rear Key concept emanated from the fact that users of larger sized mobile devices increasingly found it more difficult to properly access the side keys due to the bigger footprint of these type of devices.

The button placement takes some getting use to initially but you quickly get used to it, especially since that is naturally where your index finger rests when holding the device. 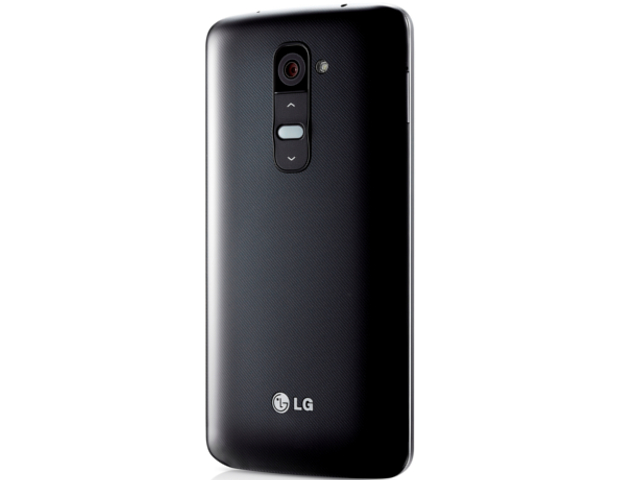 With the LG G2 its all touchscreen party at the front, control business in the back.

Powering the Android 4.2.2 Jelly Bean operating smartphone is a beast of a mobile processor in Qualcomm’s Snapdragon 800 quad-core SoC clocked at 2.26 GHz per core in the G2’s case. This CPU is backed up by 2 GB worth of RAM and some impressive battery life from the sizeable 3000 mAh battery (at least from our initial impressions).

LG has raised its optics game with the G2 as well, courtesy of a 13 MP main camera that features OIS (optical image stabilisation) and 2.1 megapixel selfie shooter at the front. The company also boosted the software enhancements for Android, adding a plethora of features that includes Answer Me, which automatically answers an incoming call when a user raises the smartphone to his/her ear.

Other software features includes our favourite, KnockON, which enables users to turn the device on and off simply by tapping on the display twice, and a novel approach to multitasking dubbed Slide Aside that enables you to switch between open applications via a three-finger swipe.

LG has lifted its smartphone game with the G2 to the point where it easily matches, and even eclipses in some aspects, the hallowed Samsung Galaxy S4. Even more impressive is the R8 000 asking price for the G2, which sees it being the most affordable device on the flagship smartphone block, despite being the newest member of that community. Keep checking www.techsmart.co.za for our complete review of the device coming soon.