The world record for the modern marathon stands at 2:02:57. Clocking in at 11 years and two months slower, Nasa’s Mars Exploration Rover Opportunity is finally celebrating completing a modern marathon on Mars. Managing a distance of 42.195 kilometres since its January 2004 landing in Eagle Crater, the Opportunity rover drove 46.5 meters on Tuesday required for the achievement. It came on the 3968th Martian day, or sol, of the rover's work on Mars.

The little rover that could surpassed the previous record distance on the moon (37 km) last year already, held by the Soviet Union's Lunokhod 2 moon rover since 1973.

"This is the first time any human enterprise has exceeded the distance of a marathon on the surface of another world," said John Callas, Opportunity project manager at NASA's Jet Propulsion Laboratory (JPL) in Pasadena, California. "A first time happens only once."

Opportunity's original three-month prime mission in 2004 yielded evidence of environments with liquid water soaking the ground and flowing on the planet’s surface. As the rover continued to operate far beyond expectations for its lifespan, scientists chose the rim of Endeavour Crater as a long-term destination. Since 2011, examinations of Endeavour's rim have provided information about ancient wet conditions less acidic, and more favourable for microbial life, than the environment that left clues found earlier in the mission.

The map below shows the rover's entire journey from landing at Eagle crater to where it is now at the Spirit of St Louis crater, next to the Endeavour Crater. 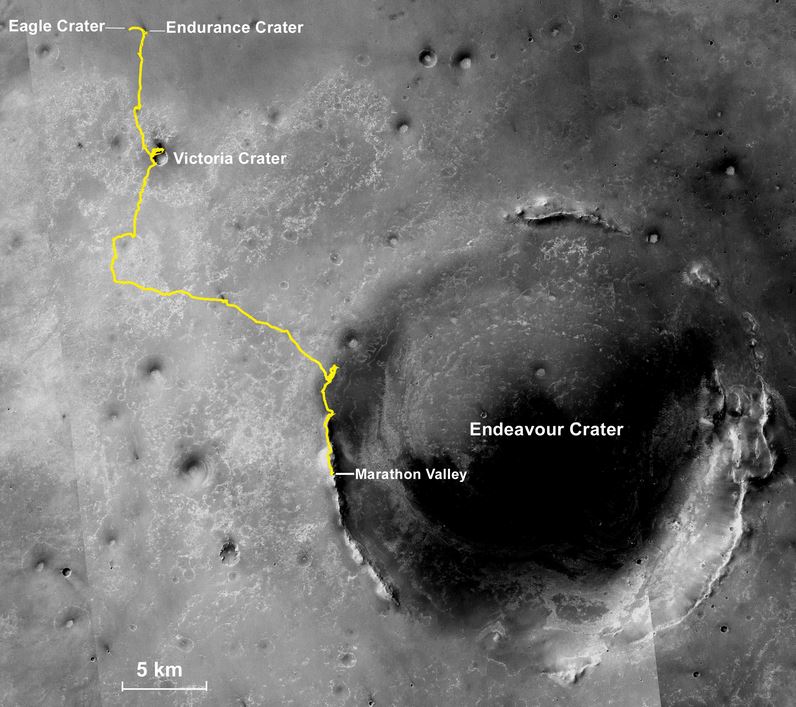