A little over two years ago, when Marvel laid out its cinematic plans, Inhumans was slated to be a fully fledged film. For whatever reason, Marvel Studios decided to nix the film, and instead repurpose Inhumans as a TV series. Now we've received the first trailer for said series, which was filmed in IMAX and will have its premier episode screened in select IMAX cinemas Stateside. 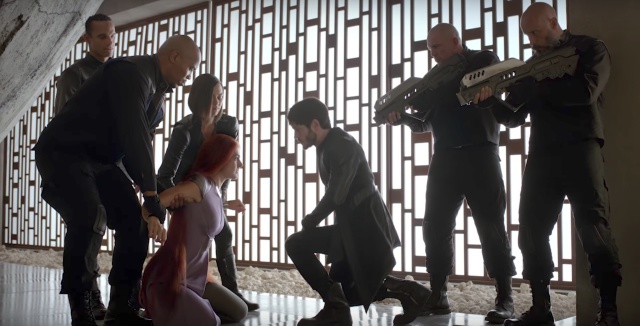 For those unfamiliar with the Inhumans, they exist in the same Marvel universe as the X-Men, and their existence has been kept hidden from humanity. The focus for the TV series' storyline will be on the Inhumans' royal family, which is led by Black Bolt (Anson Mount, Hell on Wheels). His younger brother Maximus (Iwan Rheon, Game of Thrones) is sparking a mutiny, which forces Black Bolt to flee to Earth.

What happens from there is unclear, with the trailer ended as Black Bolt is being apprehended by the authorities. Hopefully though, we'll get to see him put his powers to use, which takes the guise of an impressive set of vocal cords, strong enough to kill people.

Inhumans will land in IMAX theatres Stateside on 1 September, before airing on US televisions on 29 September.