If you think about where data centres are stored, chances are the last place you would consider is underwater. But that is exactly what Microsoft’s Project Natick  accomplishes.

We saw the project’s ambitions back in 2016 during the Microsoft Underground Tour, and as of this month, the project has entered its second phase. By combining submarine technology, and a shipping container form factor, the self-contained, underwater data centre is currently doing duty off Scotland’s Orkney Islands.

One more step – and a long journey

According to the company, the deployment of the datacenter at the European Marine Energy Centre marks a milestone in Microsoft’s Project Natick, which has been a years-long research effort to investigate manufacturing and operating environmentally sustainable, prepackaged datacenter units that can be ordered to size, rapidly deployed and left to operate lights out on the seafloor for years.

Project Natick’s 40-foot long Northern Isles datacenter is loaded with 12 racks containing a total of 864 servers and associated cooling system infrastructure. The datacenter was assembled and tested in France and shipped on a flatbed truck to Scotland where it was attached to a ballast-filled triangular base for deployment on the seabed. 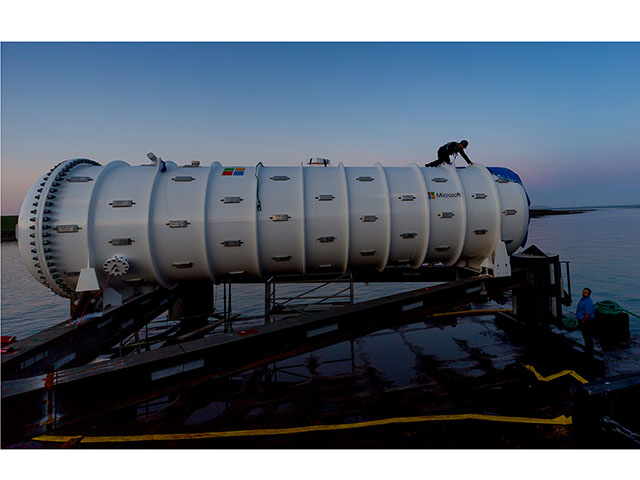 Thinking out of the box

The idea of putting data centres on seafloors may be, and certainly is, one that comes out of left field, but there is a certain logic to it as well, at least for coastal communities.

Firstly, it addresses the exponential growth in demand for cloud computing infrastructure near population centers. After all, all this data we are generating has to be stored somewhere. Add to this the fact that more than half of the world’s population lives within about 120 miles of the coast and having their data closer to its distribution makes sense as well from a performance perspective.

Microsoft explains that by placing datacenters in bodies of water near coastal cities, data would have a short distance to travel to reach coastal communities, leading to fast and smooth web surfing, video streaming and game playing as well as authentic experiences for AI-driven technologies.

“For true delivery of AI, we are really cloud dependent today,” said Peter Lee, corporate vice president of Microsoft AI and Research. “If we can be within one internet hop of everyone, then it not only benefits our products, but also the products our customers serve.” For a closer look at what the project is all about, take a look at the video below.