Adidas Originals has updated its Home of Classics pack, introducing what to us looks like pinkish-brown (champagne?) tinted colourways and emphasising the stand-out silhouette in the new batch – the Supercourt.

There are no fancy midsoles or lacing tech for the update, instead the same simple and iconic building blocks: three stripes, white leather, and rubber.

The Supercourt has 40 years of Adidas court shoe legacy behind it, and while it is not as well known as the classic Stan Smiths (also receiving an update in the Classics pack), the refresh could well pull a few eyeballs its way thanks to a few deft touches. 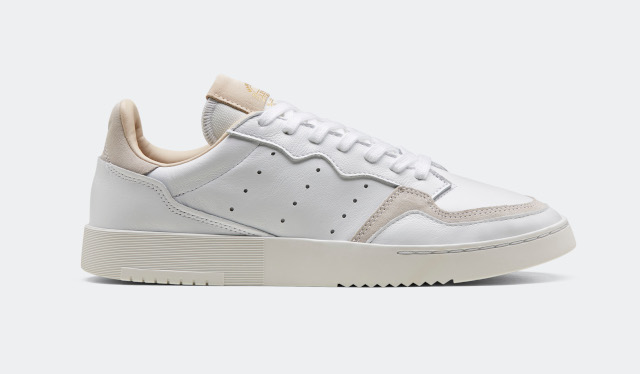 For example, the leather upper comes with nubuck overlays that add texture and depth to create a multi-layered look which will build a bit of character the more you wear them.

Adidas brought a bit of style to the rubber outsole with certain design elements that lifts it from just a regular retro design. There’s also an OrthoLite sockliner to complete the new Supercourt on the inside.

Adidas South Africa has touched a few local creators to show off the new Supercourt, including Tamara Moeng, Nkululeko Masemola, Lenzo Mangonyane, and Jakinda and Ayema of Stiff Pap. As you will see, they didn’t mind a scuff or two on their shoes, falling in with Adidas’ slogan for these – “Made with care, worn without”.

The Supercourt is not the only shoe that gets a make-over since this Home of Classics launch also features the Stan Smith, Superstar 80s, Continental 80, Rivalry Lo, and A.R. Trainer.

The new Home of Classics pack are already available at select adidas Originals stores and online at www.adidas.co.za.