Samsung’s Forum made a welcome return to South Africa last week in Cape Town, after taking place in Europe over the past few years. From the onset though, it was clear that the event would not simply be a repeat of the previous Forums, at which products led the charge to dazzle with and tempt.

Rather, the company began by striking a strongly collaborative note from the outset. First to take the stage and explain Samsung’s renewed outlook was its President and CEO of Samsung Africa, YY Kim, who elaborated that the company is changing the way it works, and promised that Samsung Africa will listen to the media and its customers.

“We will learn about what it means to be a part of Africa and to help whenever we can no matter how difficult,” he pledged. One of the notable differences from previous years is that Samsung was noticeably more humble, perhaps due to the Galaxy Note 8 battery problems.

United we stand, divided we fall

Hlubi Shivanda, the director of business operations, Samsung South Africa, didn’t mince words about the value and importance of unity. Shivanda pointed out that it is a time of global uncertainty with the world finding itself  in a state of flux. “People have less money to spend and as a result they are far more cautious of how they spend it. In Africa, this is a reality far more stark than in much of the rest of the world. Our survival is dependent on unity,” he stressed.

“We need to turn our heads and look at the people next to us. We need to ask: How can I help you? What do I have that can make your world better, easier? In return, what can you do for me? There is a Kenyan proverb that states sticks in a bundle are unbreakable. We are all in this together,” he continued.

Hlubi noted that the company’s focus is not solely on products, but rather, that it is passionate about improving the lives of people across the continent, through the on-going cultivation and nurturing of valuable partnerships, with customers, partners, stakeholders and the media. 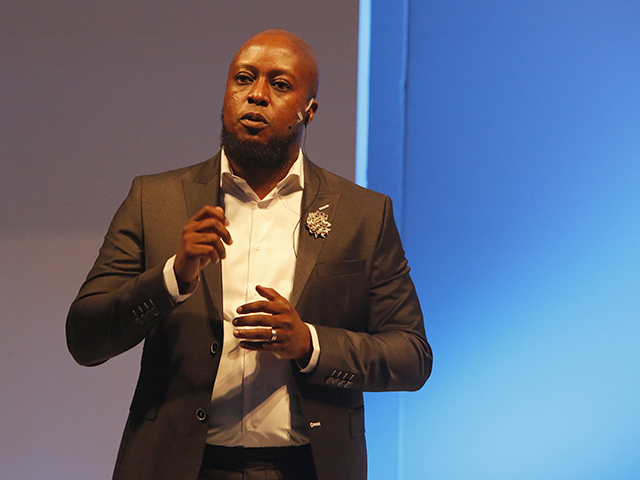 Continuing with this theme, was the Forum 2017’s keynote speaker, Basetsana Kumalo, a local TV personality, entrepreneur and businesswomen whose lists of achievements are as impressive as they are long. Among these though, was creating broadcast and production businesses, which has given her a unique lens into the changing nature of television. She explained that modern technology is allowing users to consume content very differently than in the past,

“People used to watch TV programmes at a particular time as determined by a broadcaster, but now, with video on demand, consumers can watch whatever they want when they want to,” she explained. Indeed, she pointed out that the likes of Netflix, YouTube, and other streaming services are changing consumer behaviour, with conventional TV viewing decreasing 10% in U.K and 15% in the United States  between 2014 and 2016, while smartphones are proliferating.

She explained that this means that media creators have to generate content that can speak to anyone, anywhere at any time, and most of it will more than likely be viewed on a smartphone or mobile device. However, she believes that this also presents an exciting opportunity for Africa, and its youth in particular. Indeed, one of her many businesses focuses on providing youth with the skills and wherewithal to produces short format hyper local content, which would be broadcast to mobile phones.

“When you can create opportunities for young people to have skills, you give them a sense of hope, as well as belonging. Technology can and is making a difference to young people, and by extension, the country, as harnessing the talent of the youth is the future of any nation,” she stressed.

She harkened back to Kim and Shivanda’s earlier message, about the importance of working together, stressing that harnessing technology, and the trends caused by it, uplifting the youth, and thus the country, can only be achieved via collaborative efforts. With this inspiring message, the Samsung Forum 2017 was set in motion. From this foundation, the company then began to delve into some of its newest products, which will be explored in upcoming articles.