The FUJIFILM GFX range has won strong praise from professional photographers and photo enthusiasts alike for the use of a large image sensor, boasting approximately 1.7 times the size of the 35mm full-frame sensor. The GFX100 now doubles the number of pixels compared to the current models (the FUJIFILM GFX 50S and GFX 50R).

Among digital cameras equipped with a sensor larger than the 35mm full-frame format, this is the world's first** model that offers a back-illuminated sensor with phase detection pixels, an in-body image stabilization (IBIS) mechanism and 4K/30P video recording capability.

The image sensor has a back-illuminated structure with excellent light-receiving performance. The sensor takes advantage of its wide dynamic range to achieve rich tonal reproduction and low noise, while also achieving high-speed readout of image data despite the massive pixel count.

The use of phase detection pixels across the back-illuminated image sensor produces supreme image quality while making AF up to twice as fast as that of the current GFX models. It also delivers outstanding Tracking AF performance on a moving subject and advanced accuracy in Continuous AF.

The GFX100 features five-axis in-body image stabilization controls that offers as much as a 5.5-stop improvement. Taking advantage of its sensor-shift structure, the IBIS stabilizes images not only against pitch and yaw movements (up / down and right / left tilting) but also against shift (vertical / horizontal) and roll (rotational) movements. This dramatically broadens the scope of situations where users can hand-hold the camera and still enjoy the world of ultra-high 102 million pixels resolution.

For the first time in the GFX Series, GFX100's Film Simulation options include “ETERNA” for simulating the colours and tones of FUJIFILM’s cinema film. This enables faithful reflection of videographers' artistic intentions to video production.

The camera body is highly robust due to the use of magnesium alloy and the “inner frame” structure of coupling the image sensor, IBIS and lens mount into an integrated unit. Weather-sealing is applied to 95 locations to make the body highly resistant to dust, moisture and low temperatures, catering to the tough shooting conditions of professional photography.

For the first time in a FUJIFILM camera, a vertical grip is built into the camera body, making it stable and comfortable to hold.

The GFX100 boasts highly accurate AF with exceptional ability to track a moving subject at a speed up to twice that of current models. This equates to the level of mobility that sets a new standard for digital cameras using an image sensor larger than the 35mm full-frame format.

As many as 3.78 million phase detection pixels are placed across the image sensor (approx. 100% coverage), quickly focusing on the subject regardless of where the subject is within the frame. Furthermore, the GFX Series adopts the latest phase detection AF algorithm (already popular with FUJIFILM X-T3 and FUJIFILM X-T30 in the X Series of FUJIFILM's mirrorless digital cameras) to achieve high-speed and high-precision AF in the “Single Point” as well as “Zone” and “Wide Tracking” of focus area.

The GFX100 also boasts dramatic improvement in the accuracy of Face and Eye Detection AF, which has become an essential function in fashion photography and portrait photography. The Face Detection now works with a greater shooting distance and shows excellent tracking performance even for the side profile of a person or a subject that is partially blocked by an obstacle. 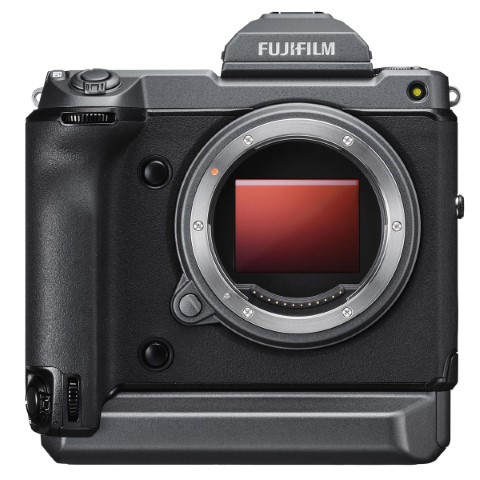 The GFX100 has a new 2.05-inch sub monitor on the rear panel in addition to the main 3.2-inch LCD monitor that can be tilted to three directions. Exposure settings and various other shooting data can be assigned to the rear-panel sub monitor so that the main monitor can be dedicated to checking framing, allowing you to concentrate on composition.

The top panel now features another new 1.80-inch sub LCD monitor, which can be set to the “Virtual Dial Mode,” displaying a virtual dial for simulated operation. This is a perfect function for users who prefer dial-based operations, adopted in GFX Series' current models.

The number of dials, buttons and levers on the camera body has been kept to the minimum for simplicity in camera operation. The top panel features the Drive Mode Dial, which enables instantaneous switchover between the Still Image, Video and Multiple Exposure modes. Each of these modes can store settings such as exposure, white balance and Film Simulation selection. That means it only requires a single dial action to recall optimum camera settings, ensuring ease of camera operation.

The GFX100 inherits FUJIFILM GFX50S's popular detachable EVF system. When the optional EVF Tilting Adapter EVF-TL1 is attached, the EVF can be tilted to variable angles to provide flexibility accommodating user preference. The EVF can be set to the “Frame Rate Priority,” “Resolution Priority” or “AF Speed Priority” mode according to subject characteristics.

The GFX100 has responded to requests by many professional photographers by allowing photos to be saved in “16bit RAW” and “16bit TIFF”, significantly improving photo data's tolerance to post-processing. This means the camera's rich tonal gradation and FUJIFILM's unique colour reproduction modes can be effectively utilised at the forefront of professional photography.

The GFX100 also features the newly-developed “Smooth Skin Effect” function, which automatically smooths the skin tone. It reduces the amount of post-processing work in portraiture, so that images can be finished at an advanced level of perfection much quicker than ever before.

The GFX100 can accommodate two GFX Series batteries (NP-T125), extending the number of frames per charge to approx. 800 when the rear LCD is used. The camera can also be powered and charged through a USB connection. Connecting an external battery that supports USB Power Delivery enables even longer continuous shooting and simultaneous charging of the two batteries in the camera.

This is also the first GFX Series model that has a supporting IEEE802.11ac 5GHz, enabling even faster wireless image transfer. For RAW processing and tethered shooting, similarly to previous GFX Series models, the GFX100 is compatible with “Tether Shooting Plug-in PRO for Adobe Photoshop Lightroom” and “Capture One Pro FUJIFILM” to accommodate the diverse workflow of professional photographers.

Although the GFX100 is coming to local shores, FUJIFILM South Africa is not yet able to provide an accurate arrival date nor price. Stateside the FUJIFILM GFX100 (body only) is set to retail for $9,999.

Further information on the GFX100 can be found here: https://fujifilm-x.com/en-gb/cameras/gfx100/

* For commercially available mirrorless digital cameras as of May 23, 2019, according to FUJIFILM