Citroën is a car brand that's on the up, not just here in South Africa, but internationally as well. It appears as if Citroën's tactic is to lure would-be drivers in with an intriguing design, and then surprise them with a well balanced and solid performing vehicle. Case in point is the 2015 Citroën C1, as it pleased to no end during my time with it.

It's All In The Eyes

For the 2015 iteration, Citroën decided to give the C1 a bit of a facelift. The front end in particular has seen the most change, with new slit-like headlights sitting above the regular round ones. An interesting look, it gives the C1 a bit of character, and it may be a divisive change. Personally, I quite liked it, as it gave the C1 an extra degree of charm. But for some people I talked to, it had the opposite effect.

Ultimately though, the Citroën C1 seems aimed at two types of drivers in particular. The first will be the recently matriculated student that's getting their first car. The other is also a first time driver, perhaps making the move from public transport to a vehicle of their own. As such, the Citroën C1 needs to be a jack of all trades in the motoring ranks. To a large extent, the Citroën C1 does exactly that, with each element, both internal and external delivering a solid performance. 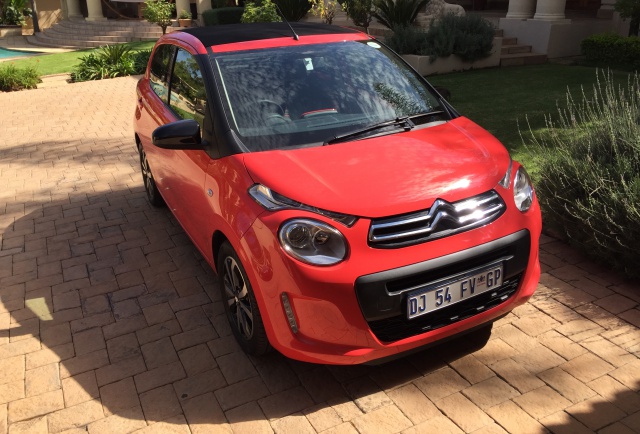 First is the 2015 C1's engine. Across the range, Citroën has gone for a new 1.2 litre 3-cylinder VTi 82 Puretech engine. Despite its entry level status, the C1's engine has a surprisingly throaty sound. Paired with a five speed manual transmission, the VTi 82 produces a solid 60 Kw of power. With a maximum torque of 116 Nm at its disposal, the C1 gets through the gears fairly quickly and reaches 100 km/h from a standstill in a relatively quick 11 seconds.

Driving in and around city streets, where a car normally hits 80 km/h to 100 km/h, the 82 Puretech engine proves more than adequate. In the fast lane on the highway though, I felt the engine lacked the necessary torque, particularly as the C1 made its way between the third and fourth gears. That said, the Citroën C1's 170 km/h top speed is on par with most entry level cars, such as Volkswagen's Up!, and won't leave its driver short changed in any regard.

Pleasing too, is the responsiveness from the C1's power-assisted steering wheel (with centre console controls). It not only provides good feedback from the wheels, but also proves sharp and quick while turning, as well as being nice and large while you're feeding the wheel. As such, the C1 earns its stripes as far as eating up the kilometres day in and day out goes. 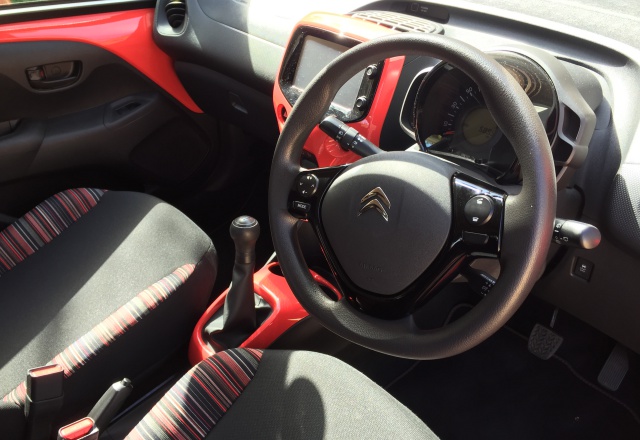 Plenty On The Inside

Within the C1 range are two options, our review model was the range topping Airscape Feel, which gains its name by virtue of its electric cabriolet cloth roof. Added to the Airscape roof overhead, is a range of in-cabin extras to give the C1 a truly premium appearance. The first thing you notice when seated inside the C1, is the colour coded plastic panels littered throughout the interior, as well as its large 7" central display. The seats also feature an interesting stitching pattern on the side of the seats, again, coloured according to the car's exterior.

All in all, the Citroën C1's interior is a pleasant place to be, and when compared to Asian or German entry level cars, feels far more visually intriguing. Granted, a lot of the C1 is comprised of plastic components (in-cabin), but it nevertheless creates an interesting cabin to be in, something which is important when dealing with traffic jammed commutes to and from work/university. 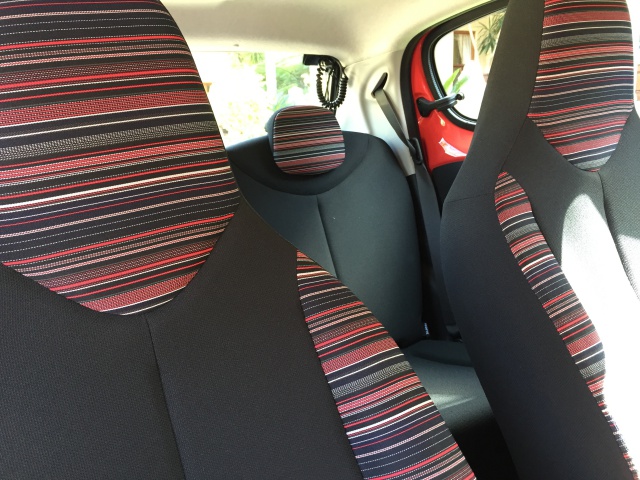 Moving back to the centre console, it plays host to a number of inputs, should drivers wish to hook up their smartphone via 3.5 mm headphone jack or Bluetooth. Added too, is a USB port should you wish to charge your device of choice. The C1's 4 in-cabin speakers were both loud and clear, giving passengers and driver with a good all-round performance.

One of the other interesting features, is the inclusion of a reverse camera, that brings an image up on the centre console whenever the required gear is selected. It provides the driver with more of a fisheye view than is ideal, which leads to objects looking a bit larger than they normally should, but proves capable enough of ensuring that any unwelcome rear collisions can be avoided.

With prices starting at R168 900 for the Citroën C1, it may be on the slightly expensive side when compared to the Volkswagen Up! (R143 000) and Hyundai i10 (R150 000). That said, it packs in a ton of extras, should you go for the Airspace Feel edition (R194 900), which from a specs perspective, outdoes many of its competitors. Added to this, is a surprisingly powerful feeling engine, despite being a 1.2 litre option, as well as offering a supremely comfortable ride. Even though some would-be drivers might shy away from the C1, because of its feminine-esque looks, in the right colour (black, white or silver), it easily ticks the boxes for any first-time car owners. 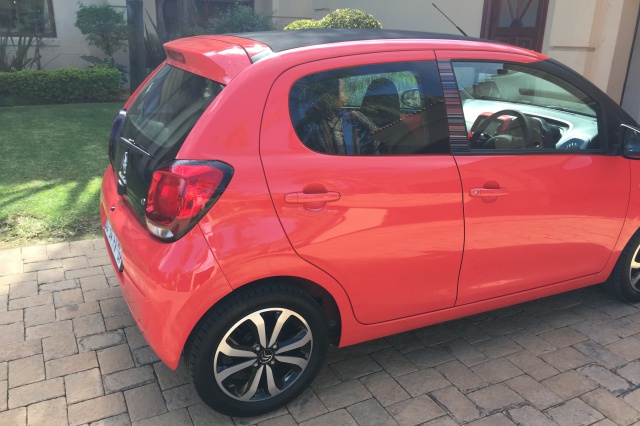