The EOS 5D Mark III has an exhaustive array of new features. However, equally as important in real time handling is often the small tweaks and improvements that are made.

For example, as would be expected from a camera of this calibre, the EOS 5D Mark III features a rugged camera body with magnesium alloy body covers and a stainless steel lens mount. The new camera also has dust- and moisture-resistant design with improved gaskets and seals.

Canon explained that, although the EOS 5D Mark III is not quite as weatherproof as an EOS-1D X camera, the camera does feature improved weather resistance as compared to the EOS 5D Mark II. The EOS 5D Mark III's newly developed shutter has a durability rating of 150 000 exposures, and shutter release lag time has been reduced to 59 milliseconds, which should make the shutter button exceedingly responsive.

Photographers who have already invested in the 5D Mark II, 7D or 60D will be pleased to hear that EOS 5D Mark III uses the same LP-E6 lithium-ion battery pack as those cameras. 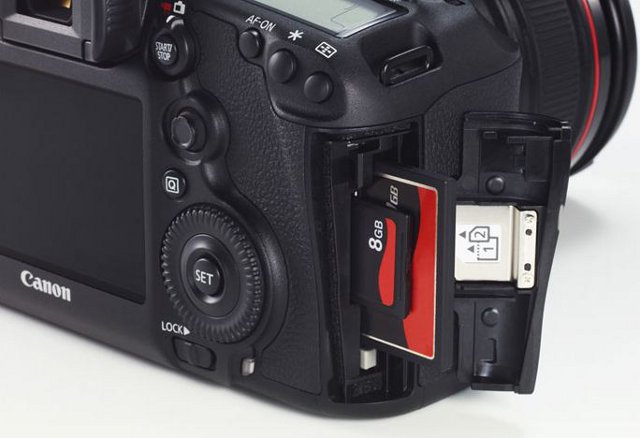 The new camera supports both Compact Flash and SD storage.

Also lifted from Canon’s top of the range model, is a 3.2” Clear View II LCD screen with 1 040 000 dot resolution, while the optical viewfinder has been upgraded to approximately 100% coverage, and features an Intelligent Viewfinder display with an optional grid on demand. The EOS 5D Mark III further has a built-in Dual Axis Electronic Level that can be displayed on both the LCD screen and the optical viewfinder.

One feature we are very happy to see is that the EOS 5D Mark III accepts both Compact Flash Type 1 and SD/SDHC/SDXC memory cards in a dual card slot configuration. Three recording methods are supported: record the same data to both cards, record different file sizes or types to each card, or automatically switch to the second card when the first card is full.

Bring on the accessories

The EOS 5D Mark III DSLR has not come to its debut alone, instead, it has brought a number of new optional accessories along for the ride. These include the new Canon Wireless File Transmitter WFT-E7A, which offers wireless LAN support for 802.11 a/b/g/n signal protocols for various network environments.

Additionally, EOS 5D Mark III launches alongside an optional Canon GPS Receiver GP-E2, which can be connected to the camera via the accessory shoe or a USB cable. With a GPS logging function built-in, the GP-E2 will log latitude, longitude, elevation, and the Universal Time Code – and allow viewing of camera movement on a PC after shooting.

With its built-in compass, the GP-E2 receiver will also record camera direction when shooting, even when shooting vertically. The Canon GPS Receiver GP-E2 is compatible with the EOS-1D X and EOS 7D as well as the EOS 5D Mark III. 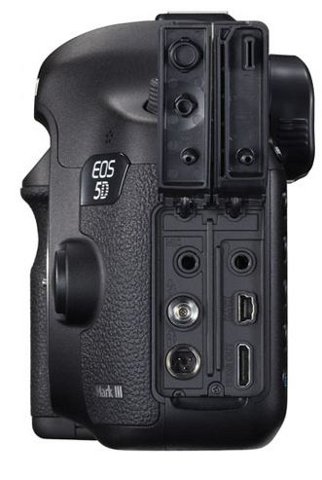 A plethora of ports available on the left hand side of the camera's body.

Some sites have been lucky enough to have spent some time with the new Mark III and have been very complimentary.

In its hands-on preview, the influential Digital Photography Review states that the Mark III mends the Mark II’s autofocus problems while adding a number of enhancements. “It's [the Canon 5D Mark III] at least as much of an improvement over its predecessor as the EOS 7D was over the 50D,” they claim. But for them the elephant in the room remains whether the pixelcount on the Mark III (22.3 MP) is enough to prevent Nikon’s D800’s 36 megapixels from stealing market share.

Over at Imaging Resource they claim: “Canon 5D Mark III raises the game in terms of overall camera performance, from frame rate to autofocus, while increasing the resolution only slightly.” They mention that the biggest improvement is the autofocus system inherited from the 1D X.

Cnet Australia believes that the Mark III is maybe not a “giant leap forward” fans expected, also mentioning that the body “feels much more like a cross between the 7D and the Mark II than an entirely overhauled camera in its own right.”

With the release of the EOS 5D Mark III, Canon has once again reinvigorated its line-up, without the sinking feeling that accompanied the reveal of the hefty price tag when Canon launched the EOS 1 D X towards the end of last year.

Indeed, at $3500, and a stated sub R34 0000 price tag locally, the camera looks that much attractive for photographers who are willing to pay a premium but are still budget conscious. It is set for launch stateside during March and a local release in the not too distant April.

Check out the video from Canon below showcasing the new Mark III.