In a move that many professional and enthusiast photographers have been eagerly anticipating and hoping for, Canon confirmed rumours of a EOS 5D Mark II successor by officially announcing its new full frame EOS 5D Mark III DSLR.

The announcement also comes at an auspicious time for the company, as its marks the 25th anniversary of the EOS system. Canon’s new baby will apparently slot in between the EOS 5D Mark II (which will not be discontinued) and top-of-the-line professional EOS-1D X. The better news is that it will apparently be more affordable than the latter, as Canon South Africa announced that it will arrive in April below the R34 000 price point.

Bring on the features

As to what the EOS 5D Mark III brings to the table in terms of features, the short answer is: plenty. For starters, the camera boasts a new 22.3-megapixel full-frame Canon CMOS sensor, a high-performance DIGIC 5+ Imaging Processor and six frames-per-second continuous shooting speed.

Additionally, users will be able to take advantage of reduced resolution M-RAW (10.5 megapixel) and S-RAW (5.5 megapixel) recording modes. Canon explained  that these settings are particularly useful for wedding photographers who take candid photos that do not require the EOS 5D Mark III's 22 megapixel full resolution.

This results in images that “take up less space on the memory cards and speed up post-processing without losing the critical benefits of RAW image data, such as highlight and shadow control as well as white balance adjustment”. 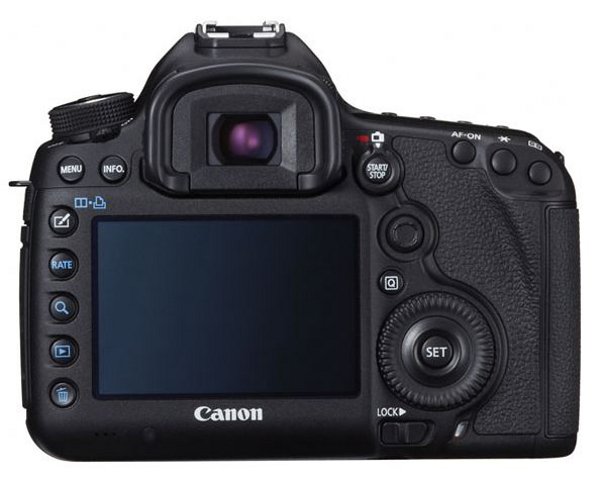 The back of the EOS 5D Mark III isn't  overly cluttered.

Point me in the right direction

While the EOS 5D Mark II was touted as being the choice for landscape and studio Canon photographers, the new camera also boasts improved weather resistance, which the company asserted makes it “a serious option for sports and wildlife photographers.”

One area where the EOS 5D Mark III follows in its predecessor’s footsteps is in its strength for photographing in low light. The camera offers a sensitivity range from ISO 100 to 25 600 within its standard range, as well as a new low ISO 50 setting for studio and landscape photography and two extended ISO settings at the high end of 51 200 and 102 400. 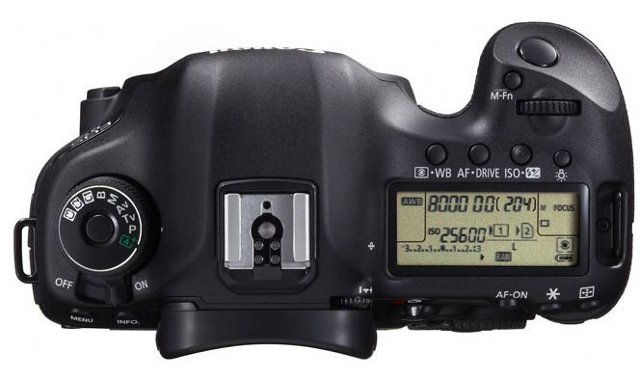 A top view of the camera shows a very familiar EOS layout.

Getting serious about movies

The Canon EOS 5D Mark III also includes manual audio level control with 64 levels, adjustable both before and during movie recording. There is an automatic audio level setting, or sound recording can be turned off entirely, and a wind filter is also included.