The study, which was conducted with the backing of First National Bank, revealed that the proportion of the average user’s cellphone spending on data has increased by half in the past 18 months – from 8% of budget at the end of 2010 to 12% in mid-2012.

Additionally, spending on voice has apparently dropped from 77% to 73% in the same period – which World Wide Worx  noted precisely matches the difference in data spend. Meanwhile, SMS spend remains steady at 12% (despite a rise in instant messaging), and full music tracks feature for the first time – taking up 1% of the average spend on a cellphone.

Arthur Goldstuck, the managing director of World Wide Worx, explained that “spend on data is a barometer for the rapid increase both in the number of internet users in South Africa and in the intensity with which experienced users engage with the internet.” 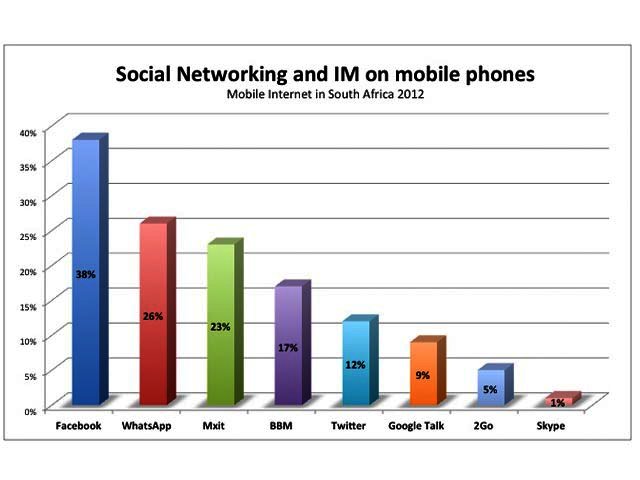 The report shows that Facebook is still commanding significant attention from a data usage point of view
Getting into specifics
More specifically, the largest increases in uses of data on the phone were unsurprisingly seen in instant messaging services, with more than a fivefold increase in the proportion of BBM users in the past 18 months – from 3% to 17% of adult cellphone users living in cities and towns.

Browsing on phones also increased substantially, from 33% to 41% of users, app downloads rose from 13% of users to 24%, while Facebook use increased by more than half, from 22% to 38%.

Not surprisingly given its popularity, Twitter has carved out its fair share of the data usage pie. According to the report, the biggest growth after BBM was seen in the Twitter user base, which rose from 6% to 12% of adult cellphone owners.

“This is only the beginning: the social networking genie is out of the bottle,” said Goldstuck, “Businesses have to recognise the trend, and begin developing strategies to address it,” he advised.

The Mobility 2012 project comprises two reports, namely The Mobile Consumer in SA 2012, which looks at cellphone usage and banking trends, and The Mobile Internet in SA 2012, which explores online and data trends.
It is based on face-to-face interviews with a nationally representative sample of South African adult cellphone users living in cities and towns, conducted in June 2012.
TAGS:
World Wide WorxMobility 2012 research
USER COMMENTS