Hyundai Automotive South Africa launched a new i20 1.4 CRDi Glide turbodiesel derivative on Friday, at a function held at the Stone Cradle Restaurant and Conference Centre in Doornkloof, Pretoria. The new 1.4 CRDi Glide diesel-powered model not only completes the local i20 range, but also takes top spot within the line-up.

Under this car’s South Korean bonnet resides a 1.4 litre turbocharged four cylinder diesel engine that churns out 66 kW of peak power at 4000 RPM and a staggering 220 Nm maximum torque between 1500 and 2750 RPM.

This powerplant is coupled to a smooth 6-speed manual transmission, and delivers an exemplary fuel economy figure of around five litres per 100 km. Performance figures are identical to that of the 1.4 litre Fluid petrol manual version of the i20, with a claimed 0-100 km/h time of 11.6 seconds and top speed of 181 km/h.

During the launch we had a chance to get behind the wheel of this new vehicle, and drove it on a test route of more than 150 km on both town roads as well as the highway in Pretoria. We found the 6-speed gearbox to be a real treat in that it allows for a quiet, less frenetic, ride.

From first through to third gear, shifts are short and you hear the familiar tractor-esque drone of the diesel motor. When shifting from fourth gear through to sixth, the gearbox calls upon driver to shift a lot later.

Since the rev counter barely exceeds 2200 at highway speeds of 120 km/h, the cabin remains eerily quiet, devoid of almost any audible engine sounds, compared to the average 1.4 litre petrol engine that can be heard labouring at around 3500 RPM.

Adding to the lack of road noise during your daily commute is Hyundai’s extensive use of advanced noise reduction materials throughout the development process of the the i20 CRDi. According to the company this resulted in exceptionally high levels of refinement and low levels of noise, vibration and harshness (NVH), to provide new i20 owners with a quieter cabin ambience. 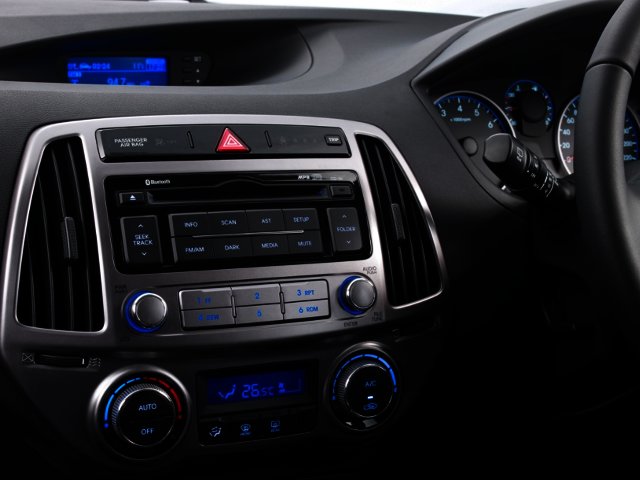 All of the dashboard controls are functionally laid out and easily accessible in the cabin of the Hyundai i20 CRDi Glide.

The prices for the entire Hyundai i20 range including the newly added i20 1.4 CRDi Glide turbodiesel are as follows:

According to Hyundai, its main rivals in the B-segment hatch segment is VW’s Polo, Ford’s Fiesta, the Chevrolet Sonic and Nissan’s Micra. The company asserts that its i20 offers more value thanks to a comprehensive list of standard equipment and convenience features, compared with those of its competitors.

These features include an automatic air conditioner system complete with anti-bacterial pollen filter, an audio system that features four speakers plus two tweeters and Bluetooth music streaming, as well as a full accompaniment of dual-front airbags, side airbags and curtain airbags.

“The i20 has been very popular with South African buyers since it came to market in 2009, thanks to its combination of efficiency, quality, practicality and value. With its sharper styling influenced by fluidic sculpture, the new i20 will appeal to an even broader range of buyers, including younger consumers,” said Stanley Anderson, marketing director of Hyundai Automotive SA.