Apart from releasing the HP Spectre XP and the HP EliteBook Folio at the Global Influencer Summit in Shanghai, China, HP also announced other new machines in the form of its Envy ultrabooks.

The Envys bring some variety to the ultrabook market by appearing in both 14” and 15.6” versions. More appealing for those who desire a bit of gaming on their ultrabooks, is that the machines are also available with graphic solutions, in the form of AMD Radeon 7600 series GPUs. Both the 14” and 15.6” version include Beats Audio, and thanks to two speakers and a subwoofer, we found the sound much better than on HP’s Spectre XT ultrabook.

The Envy ultrabooks come with a screen resolution of 1366 x 768, and are equipped with third generation Intel Core i3 or i5 processors, with RAM options available between a paltry 2 GB to a generous 16 GB. With a thickness of 19.8 mm, the Envys sport a decent serving of two USB 3.0 ports and one standard USB 2.0 one.This is apart from the HDMI port, SD card slot and fold-down wired LAN port. 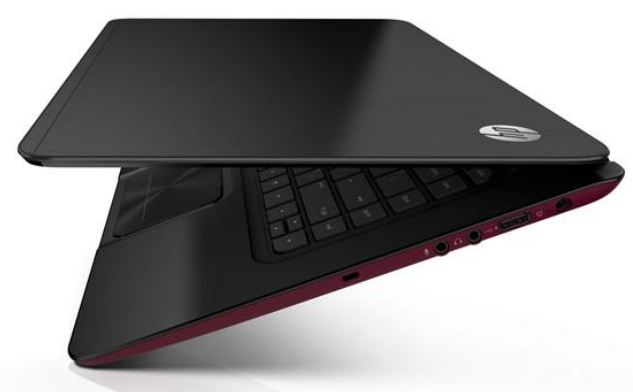 The HP Envy ultrabook looking good in red and black
Unfortunately, they pull the scales at a slightly heavier 1.75 kg (14”) and 1.93 kg (15.6”). Both units include a full-sized keyboard (no number pad included) and what HP calls their Imagepad (mousepad), which is capable of touch gestures such as two finger scrolling.

The notebooks are available in a silver-and-black version, or a very appealing red-and-black option, which in our books make for one of the best looking ultrabooks available, bar the Asus Zenbook. We also liked the soft-touch, slip-resistant base and brushed aluminium cover. HP is adamant that the 14” model can handle eight hours of work, while the 15.6” model can provide as much as ten hours.
Units are available with SSD drives, or with a regular hard drive/ 32 GB SSD cache combo.

So what is an ultrabook without an SSD drive? HP has dubbed these “sleekbooks”, with the HP Envy sleekbook range being almost identical to the Envy ultrabook range, except for the fact that it opts for a standard hard drive rather than an SSD option. These are priced cheaper than the Envy ultrabooks, while the 15.6” model further includes not only an Intel processor option but also an AMD solution too.

The HP Envy ultrabooks are expected to be available locally in June at a welcome sub R10 000 price-point, starting at R9000. The Envy Sleekbooks will enter the market at an even more affordable R8000.
TAGS:
HPultrabooksHP EnvyEliteBook FolioEnvy Spectre XTGlobal Influencer Summit
USER COMMENTS