In response to the serious threat of identity fraud, a web-based identity authenticated service, Identicate, was launched recently in Morningside.

The offering was created by Xpert Decision Systems (XDS), a credit information bureau, in conjunction with Ideco Biometric Security Solutions.

Mike Henderson from XDS began by pointing out the need for Identicate, which was being fueled by staggering losses associated with identity fraud. He explained that in a ‘good’ month, South African retailers had to contend with losses of around R3 million due to fraud, whereas in a ‘bad’ month, this could reach as high as R12 million.

Additionally, he pointed out that identity theft had become increasingly sophisticated, due to the involvement of crime syndicates. Worst yet, identity-based fraud had become widespread across numerous industries. He cited, for example, that the local healthcare industry also reports losses of as much as R13 billion a year, partly due to identity-based fraud. 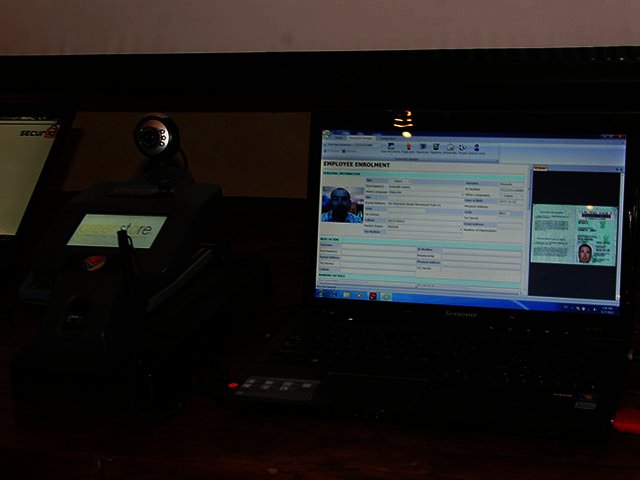 The Identicate solution consists of a biometric scanner (on the left) and the web-based database(shown on the computer screen).
Verify yourself

To address this problem, Identicate, which is based on digital fingerprint verification, creates a link between demographic data (such as one’s name, address and ID number) and fingerprint data, to provide what the company asserted is “the fastest, most accurate way to authenticate consumer identity.”

In a live demonstration at the launch, the company showed how a new person’s details can be added to the web-based database, along with their biometric data. This could subsequently be used to verify that a customer with a particular identity document was who they claimed to be, as it was far more difficult to fake a fingerprint than a document.

The requisite fingerprint scanner could then be deployed at the point of sale, and then connect to the IDS database, where it would match a customer’s scanned fingerprint data with one’s identity number on record. In the demonstration, the company proved that this was a quick process in practice, with the complexity involved happening quietly and non-invasively in the background.

However, while the benefits to retailers and customers, wary of having charges run up by someone who had stolen their identity, were obvious, the system could just as easily be deployed for a number of other uses, including credit applications, insurance claims, job-applicant screening, rental contracts and even to prevent membership card fraud.

Marius Coetzee, the managing director of Ideco, explained that while many biometric modalities were available, the use of fingerprints was the most mature, most reliable and most accurate, as compared to facial or iris recognition, for example.

This meant that the technology had advanced to the point where it was sophisticated enough to recognise attempts to fool the system (for example, by using a severed finger). Also working in its favour was the fact that the company had supplied more 75 000 fingerprint scanners, over the past ten years, which were being used to provide accurate identity data for more than 2.5 million people across Southern Africa. These were being used in a range of environments, from mines to residential estates, continued Coetzee.

“This seriously large scale use of the top fingerprint technology proves two things beyond doubt. Firstly, the technology is tried, tested and proven. Secondly, it’s well-accepted by millions of local people who are accustomed to using it on a daily basis,” he continued.

Vivian Pather, the managing director of XDS, explained that in essence, Identicate allows sharing of fraud data, which he stressed was “urgently needed” to reinforce security and minimise risk across different companies. He added that as a “potent antidote” to fraud, Identicate further highlights identity fraudsters and thus protects suppliers and consumers.

"It will also protect South African business by ensuring that accurate identity-based information is rapidly available to avoid the increasing losses caused by a wide variety of identity frauds,” he concluded.