New report breaks down Twitter popularity by country and city

Gamers must not miss the third ROG Invitational fi...
0
comments

The power of video conferencing in education in a ...
0
comments

It’s no secret that Twitter is highly popular. What is lesser well known, is just how popular, and where the microblogging platform has attracted the most accounts and active users.
According to a new report by Semiocast, a media monitoring group, much has been revealed about just who, country wise, is most copiously following the Twitter trend.
The first revelation coming out of the report is that, as of June, Twitter reached the half billion accounts mark, which includes more than 140 million in the US alone.
Good tweetment
The report also found that while the growth of the user-base growth is slowing in Japan and Korea, Japan remained one of the most active countries on the social platform.
On its site, the Semiocast explained that it had analysed 517 million Twitter user profiles created before July 1st 2012, as well as a sample of one billion public tweets posted from June 1st to June 30th 2012. It then used its “proprietary platform, databases and tools” to process user profiles in order to determine the location of each user using all available information.
The results that emerged are eye-opening, to say the least. 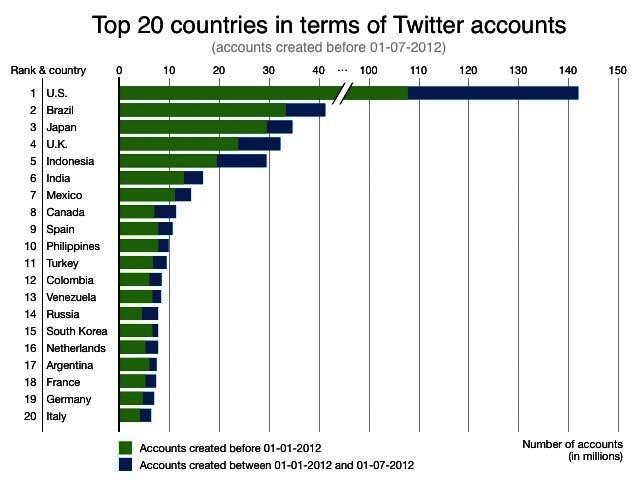 Unsurprisingly, there is no shortage of Twitter users in the US.
Top tens
The top ten countries with regards to Twitter accounts were found to be, in order: the US, Brazil, Japan, the UK and Indonesia, India, Mexico, Canada, Spain and the Philippines.
While the US represents 27.4% of all Twitter users, with 141.8 million accounts created before July 1st, 2012, this is down from 28.1% at the beginning of this year.
And, while Stateside users are responsible for posting 25.8% of all public tweets and still dominates Twitter nations, overall growth of the service was found to be higher in other countries.
Brazil, for example, saw its registration rate grow from 33.3 million in January to 41.2 million in July 2012. However, it is not just growth that counts, how active users are and how many tweets they post is another factor that was considered, and cities were also ranked by this prerequisite.
Surprisingly, it was Jakarta which emerged as hosting the most prolific posters, followed by Tokyo, London, Sao Paulo, New York, Bandung, Paris, Los Angeles, Chicago, and Riyadh. 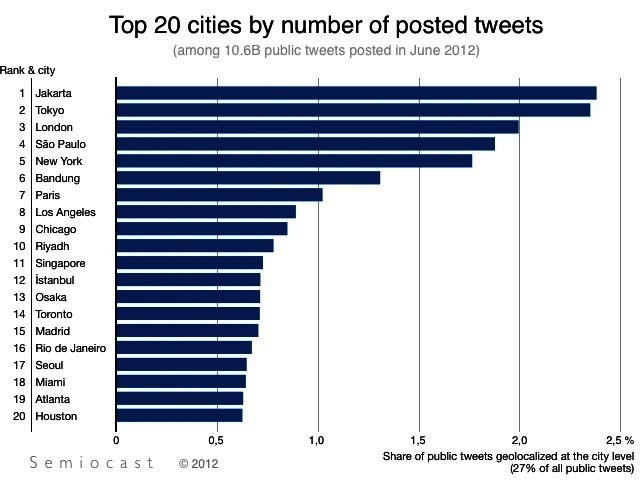 In the posted tweets stakes, however, Jakarta emerged as the leader.
Interesting pieces
Perhaps the most interesting stat came from Japan, which was found to have recorded the second slowest growth in the top 50 countries; and yet remained the second most active country in terms of posted tweets.
The report elaborated that in June 2012, 10.6% of all public tweets were posted from Japan, while Japanese users represented 6.7% of all Twitter users. This resulted in Japanese being the second most used language on Twitter, after English.
To the point

In short, the report only emphasized just how pervasive the micro-blogging platform has become, while revealing a quiet race of sorts between nations and cities to be the most connected, and most vocal, in the Twitter universe.

Love it or hate it, even the most fervent Twitter hater cannot deny its expansive global presence, and influence, on the #social #media #landscape.