At the beginning of this year Nvidia showed off the next iteration of its Tegra super chip, dubbed Project Kal-El (Tegra 3), touting it as the world’s first mobile quad-core processor. Nvidia has now revealed that Kal-El actually isn’t a four-core processor, as it boasts a fifth core.

Via a couple of whitepapers, the GPU and mobile CPU maker outlines this patented fifth core. This extra core that Nvidia refers to as the “companion core”, runs at a lower frequency (capped at 500 MHz) and operates at exceptionally low power. Within the first whitepaper the company outlines its fifth core and in the second whitepaper, it states the benefits of quad-core for different kind of tasks, the likes of surfing the net, playing games, using an app and multitasking.

Whilst the Kal-El system-on-a-chip (SoC) performs less power-hungry and intensive tasks such as web browsing, or music- and video playback, it completely powers down its four performance-tuned cores (can run at up to 1 GHz), and employs its fifth companion core. When it is called upon for more demanding jobs including games, Kal-El disables its companion core and turns on its four performance cores, one at a time, as the work load increases.

Nvidia also stated that the “Variable SMP architecture is also completely OS transparent,” meaning that neither the operating systems or the applications that devices powered by Kal-El will run on, will have to be redesigned, in order to take advantage of the fifth core. On the graphical front, Project Kal-El utilises a new 12-core GPU, delivering up to three times the graphics performance of the Tegra 2 SoC.

In related news Nvidia also recently announced its Windows 8 Developer Program, which will provide developers with tools and resources for building applications for ARM and x86-based devices that will operate on Microsoft's forthcoming operating system, Windows 8. 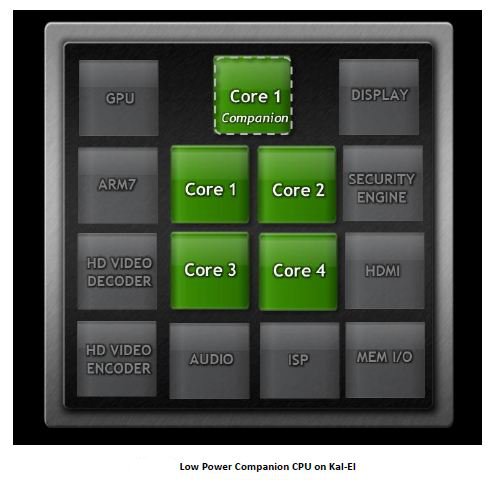