Walt Disney Company and Nu Metro treated us to an advance screening of Wreck-it Ralph in Hyde Park this week.
The preview provided insight into why the movie has smashed box office records in the US and overseas, garnering $150 million Stateside and $200 million worldwide to date.

The animated movie, which is in very well implemented 3D and takes place in an arcade world, pays homage to gaming stereotypes and poses the question: what if gaming avatars where real and had their own lives, hopes, dreams and fears to contend with?

Voiced by John C. Reilly (Boogie Nights, Step Brothers), Ralph is the villain of the titular game, who gets tired of being the bad guy and calling a rubbish dump home. Envious of the game’s hero, Fix-It Felix, Jr. (voiced by 3D Rock’s Jack McBrayer), he resolves to change his lot in life by winning a medal, a feat he is told is impossible for game villains to achieve. 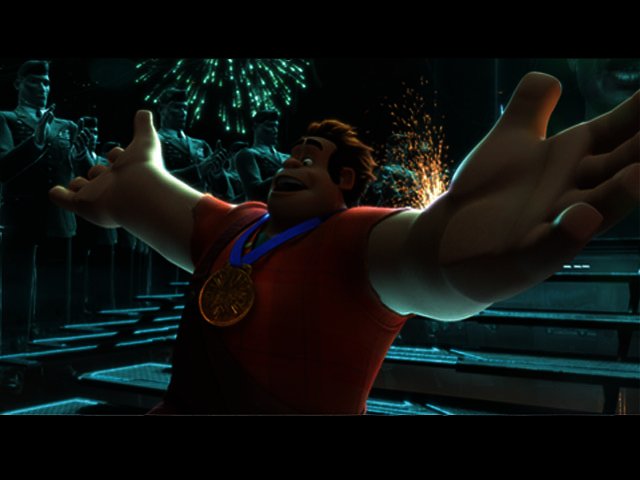 Meet Ralph - your average not-so-bad bad guy who secretely wishes he was a hero.
Suit up and shoot

However, hope comes in the form a chance to leave his arcade game and enter the first person action title, Hero’s Duty (which offers some funny and distinct nods to Halo, Gears of War and even the Aliens franchise).

Additionally, several popular video game characters make a  cameo appearance, such as Zangief, Ken, Ryu, Chun Li and Cammy from the Street Fighter Series; Q-Bert and his cast of enemies; Pac-Man and the orange ghost, Clyde; Sonic the Hedgehog and Dr. Eggman and of course Bowser, from the Super Mario series. Well worth watching out for is the ‘Bad-Anon’ support group scenes and Ralph’s attempt to join a party.

After winning his prized medal, Ralph then stumbles his way through a series of mishaps, and inadvertently crash lands in another game, Sugar Rush. This is a racing game world made up of candy, that will no doubt bring back sweet Mario Kart memories for gamer audiences.

It is here though, that Vanellope von Schweetz (voice of comedian Sarah Silverman), a ‘glitch’ in the game, steals Ralph’s precious medal (and then proceeds to steal the movie through a consistently endearing performance),  as she too is on a mission of her own that is not too dissimilar from Ralph’s purpose. 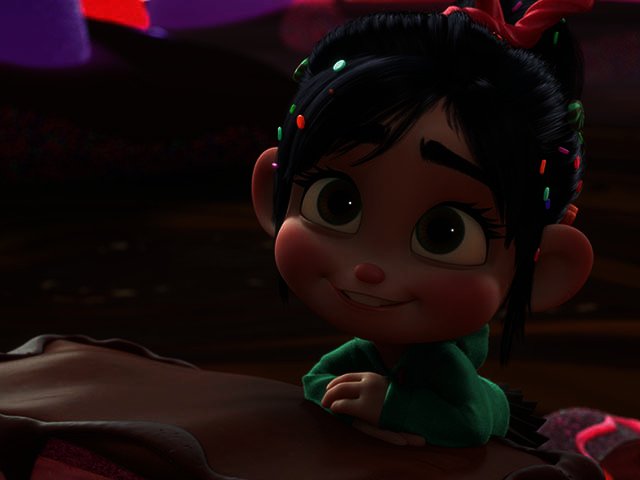 Sarah Silverman's Vanellope von Schweetz steals not only Ralph's medal, but also the show,
with an appearance that is the definition of quirkily endearing.
However, the movie quickly reveals that it has a fair bit of nuance and depth, as the two become at first reluctant and then firm friends, who are faced with a far greater threat, to themselves, their world and the whole arcade, than they imagined.

Fix-It Felix, Jr meanwhile, goes to find Ralph, as without him Wreck-it Ralph is in danger of having its plug pulled, and falls in love with Sergeant Calhoun (voiced by Glee’s Jane Lynch).

While the movie is entertaining and family friendly, it also reveals that it has both heart, and cleverness, as Ralph, Felix, Vanellope and Sergeant Calhoun roles are brought together for a masterful and feel good climax.

While it will certainly evoke some nostalgia for older gamers, Wreck-it Ralph is by no means a gamer movie exclusively; it is clever, funny and heartwarming in its own right.

It is one gem though that really deserves to be seen by anyone who can relate to aspiring to improve their lives and breaking out of their imposed limitations. It opens on the 25th of January.

All images provided by and copyright of Disney, 2012