In the notebook world, the words ‘portability’ and ‘gaming notebook’ are not often terms used too closely together. Instead, a performance notebook suitable for high-end gaming is frequently not at all portable. According to Razer, mobile systems developed for gaming today compromise on portability and form factor for game performance. The company pointed out that while such machines run games well, they are thick and can weigh in excess of five kilograms.

Gaming hardware manufacturer Razer intends to go against this trend, with the launch of its Blade 17” gaming notebook, which weighs 3.1 kg and is only 20 mm thick. The notebook further features a fast Intel Core i7 processor, 8 GB 1333 MHz DDR3 memory, an NVIDIA GeForce GT 555M with NVIDIA Optimus technology and 2 GB dedicated GDDR 5 video memory. Additionally, the notebook sports a  17.3" LED backlit Display with a 1920 x 1080 resolution.

The notebook also features the Switchblade User Interface which comprises of ten dynamic adaptive tactile keys for easier access of in-game commands. There’s also an LCD capable of two modes: one mode that displays in-game information when a mouse is in use; and another mode that functions as an ultra-sensitive, multi-touch panel designed for gaming on the go. 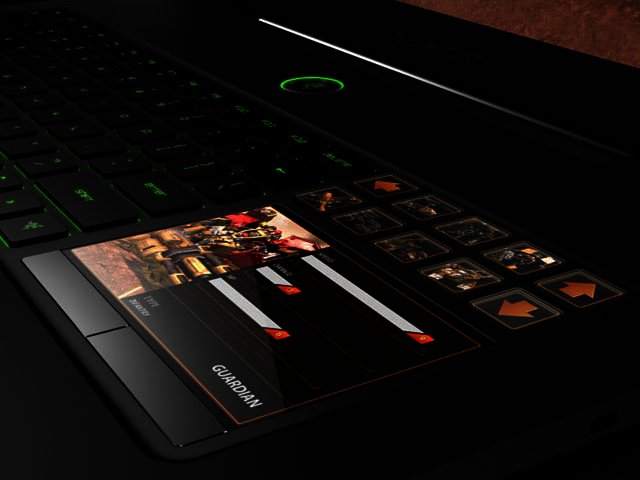 The Razer Blade notebook features a dual mode LCD
“The Razer Blade was designed to give gamers a laptop they could truly use on the go,” said Min-Liang Tan, Razer chief executive officer and creative director. “Its sleek, lightweight aluminum construction makes it the thinnest 17-inch gaming laptop available today,” he asserted. The notebook should be released in the US towards the end of the year for US $2800 (approximately R19 700), but South African availability has not been announced.
TAGS:
gamingnotebooksRazer
USER COMMENTS