Solar power is normally associated with eco-friendly geysers and innovative battery solutions, but between 18 and 29 September, it will be used to power cars during the Sasol Solar Challenge South Africa 2012 endurance race.

The two-week long, eco-efficiency racing challenge takes place every two years, with teams from around the world coming to South Africa in order to participate and demonstrate the benefits and performance that can be achieved with solar-powered vehicles.

This year, 12 teams will take to the streets in their innovative, custom designed and constructed solar-powered cars, including five teams from South African universities (University of Johannesburg, Wits University, North West University, Tshwane University of Technology and the University of Cape Town). The challenge? Put these vehicles to the test by travelling 5 400 km across some of the most demanding terrain South Africa has to offer.

Teams will compete in stages, with the winners being determined by three different criteria, namely average time on each stage, average energy consumption and the car’s average battery usage.

Pretoria is the starting point for this challenge, from which teams will drive through Rustenburg, Lichtenburg, Vryburg, Upington, Springbok and onto Cape Town over a period of four days.

Following a day of rest in the Mother City, the teams will depart from Cape Town, passing through amongst others Worcester, Oudtshoorn, Port Elizabeth, East London, Queenstown,  Bloemfontein, Pietermaritzburg (or Kokstad), Middelburg, Witbank and finally ending back in Gauteng 11 days later. 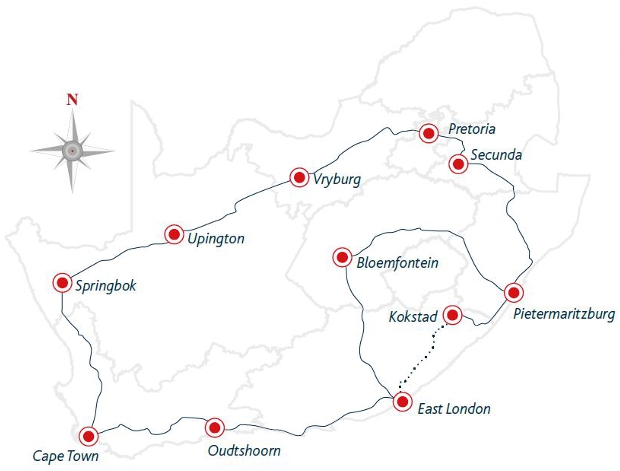 Through its involvement with the race, Sasol aims to promote alternative energy and innovation especially in the fields of solar energy. According to the company, there is a shortage of skills in the science and technology fields within the local employment space. Via this challenge, Sasol  hopes to use the race as a platform to promote careers in the field of science and technology to local pupils.