For the year, PC shipments totalled 352.7 million units, a 3.5% decline from 2011. HP retained the top spot in the global PC market, accounting for 16% of the market. Lenovo was in the runner up position courtesy of its 14.8% market stake, whilst Asus (no. 5) showed the strongest growth among the top 5 vendors, with shipments increasing 17.1%.

Like IDC, Gartner asserts that holiday shoppers no longer viewed PCs as the number one gift item, rather opting for more attractive mobile devices such as smartphones and tablets. The company’s analysts did state that there was an uptake of very low priced notebooks as a part of mega holiday deals, but this uptake did little to boost holiday PC sales. Additionally, the analytics firm also concurred with IDC that the launch of Microsoft’s Windows 8 did not have a significant impact on PC shipments within Q4 2012.

HP on top, Lenovo is runner up

HP landed top position in worldwide PC shipments during Q4 2012, although Gartner found that the US company’s shipments did not grow compared to the same quarter a year ago. Gartner asserts that HP was successful in managing large retail deals targeting the launch of Windows 8 as well as festive season offers within selected regions.

Lenovo found itself in the runner up spot, but the Chinese firm experienced the best growth rate (8.2%) among the top five PC vendors globally. Lenovo’s market gains exceeded regional growth rates in the US, EMEA (Europe, Middle East, and Africa) as well as Asia/Pacific, but was lower than the industry average in Latin America and Japan.

Among the top five vendors, only Lenovo showed year-on-year growth and its strong performance in the quarter helped it displace Acer (no. 4) from the number 2 position. Dell (no. 3) performed weakly, losing nearly 2% share in Q4. 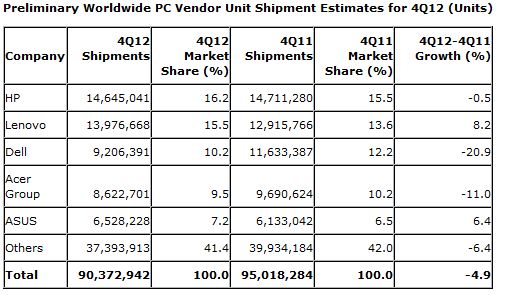 In the US, PC shipments totaled 17.5 million units in the Q4 2012, a 2.1% decline from the same period in 2011. Due to the tight inventory control and preparation for the Windows 8 launch, most PC vendors were able to ship Windows 8 PCs to the retail space, although PC sell-through rates were rather weak.

“Consumer’s holiday spending went into other products and services, and US holiday sales became less important for PC sales. For professionals, the fourth quarter is typically a good sales season because of last minutes PC purchases before the tax year-end. Our early research indicates that there was good growth in professional PC sales,” said Mikako Kitagawa, principal analyst at Gartner.

Within EMEA PC shipments totaled 28.1 million units during Q4 2012, a 9.6% decrease from the same period during 2011. Western Europe remained the weak point across EMEA, as Central- as well as Eastern Europe and the Middle East and Africa saw growth on a quarter-on-quarter basis.

According to Gartner, the EMEA PC market experienced two consecutive quarters of decline during the second half of 2012, resulting in overall shipments for 2012 declining 2.8% from those of 2011. Western Europe lost another 10% of volume, indicating likely structural changes to the market rather than weak demand. 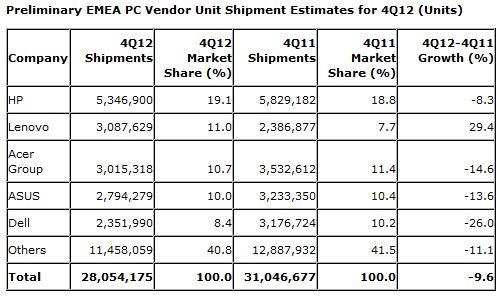 Table: Gartner
PC shipments in Asia/Pacific totaled 29.9 million units in Q4 2012, a 1.8% decline from the fourth quarter of 2011. Vendors struggled to offer compelling products to convince buyers to upgrade and attract new buyers as smartphones and tablets proved to be more attractive acquisition propositions to consumers.

The introduction of Windows 8 was met with lukewarm response and the availability of this new desktop and tablet operating system was primarily on the higher-end models, which were priced beyond the mainstream price point for volume sales.

Tablets’ effect on the PC market

“Tablets have dramatically changed the device landscape for PCs, not so much by ‘cannibalizing’ PC sales, but by causing PC users to shift consumption to tablets rather than replacing older PCs,” explained Kitagawa.

She added that consumers were expected to obtain both a PC and a tablet as their personal devices. Gartner now increasingly suspect that most individuals will shift consumption activity to a personal tablet, leaving only creative as well as administrative tasks for a shared home PC. There will be some individuals who retain both devices, but the firm is of the opinion that these users will be exception and not the norm. Therefore, Gartner thinks that buyers will not replace secondary PCs in the household, instead allowing them to age out and shift consumption to a tablet.

“This transformation was triggered by the availability of compelling low-cost tablets in 2012, and will continue until the installed base of PCs declines to accommodate tablets as the primary consumption device,” Kitagawa concluded.